In Brazilian Cave Insects, Females Have the Penis 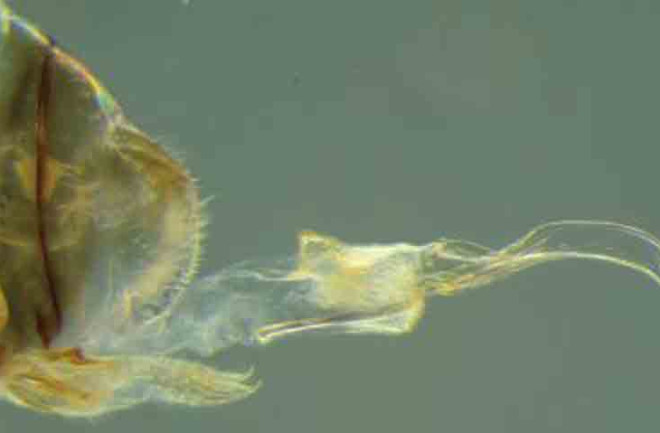 The gynosome of a female cave insect. It features spikes to hold it in place once it's inserted into males. Credit: Current Biology, Yoshizawa et al. In the dark caves of Brazil, certain insects take sexual role-play to a whole new level. Female insects of the newly discovered genus Neotrogla have highly elaborate, spiky penises, which they insert into males’ vagina-like organ to reproduce. Reversed sex roles have been identified in several other species, including male seahorses that undergo pregnancy. However, after studying the mating habits of Neotrogla, which represents four distinct species, researchers have determined that this is the first example of an animal with sex-reversed genitalia.

When Neotrogla get busy, the female climbs on top of the male and inserts her penis-like structure, called a gynosome, into the male in order to receive sperm capsules. Once the pair is locked together, they’ll copulate for a marathon baby-making session of 40 to 70 hours. However, the act is about more than just reproduction. Food is scarce in the caves that Neotrogla call home, and male sperm capsules double as a nutritious meal for females. Researchers believe females compete with each other to literally capture males and steal their seminal gifts. And capture is an accurate way to describe Neotrogla intercourse. Once inside the male, the female’s gynosome inflates and spiky structures on the organ anchor the two creatures together. When researchers once attempted to pry apart a mating pair, the male’s abdomen was ripped from the thorax, but the genital coupling remained intact. The findings were published Thursday in the journal Current Biology.

The research team believes the nutritional value of male semen makes it advantageous for females to mate often — sometimes before they even have mature eggs. The spiky gynosome and long copulation period allows females to extract the most nutrition from each mating session. Not very sexy, perhaps — but from an evolutionary standpoint, pretty darn clever.