Disguises, fake sex, and eau de rotting flesh: These plants and animals use the weirdest ruses to get by. 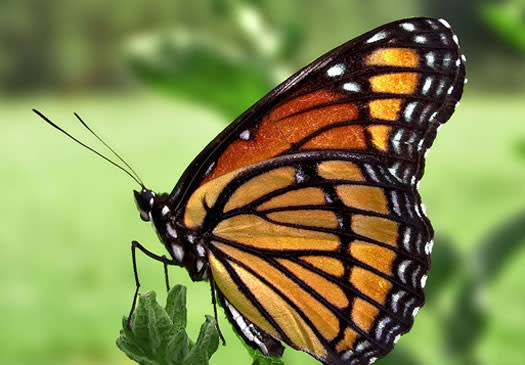 It's hard enough to navigate life when you know who's who. But with many plants and animals, things are not what they seem. A species pretends to be something it's not if there's a sexual or survival advantage to be had, and so mimicry abounds.

Here's one of the all-time classic con jobs in the animal kingdom. The monarch butterfly is poisonous. The viceroy butterfly (pictured) is not, but evolved a copycat image of the monarch to fool predators who have learned to associate this orange-and-black-with-white-spots color scheme with the unpleasant experience of trying to eat a monarch.

It's not quite an identical copy (it's got an extra black stripe on its wing), but it's close enough to keep viceroys thriving rather than becoming prey. 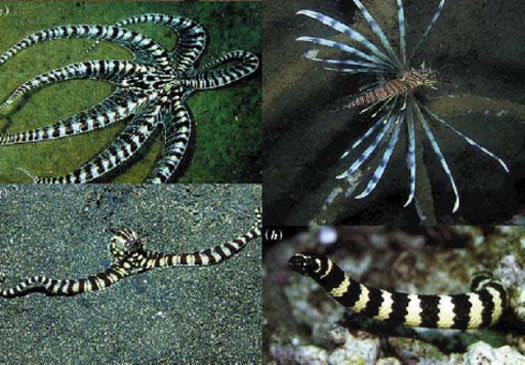 Many of the mimics on our list use just one trick to get by, but not the mimic octopus. This two-foot-long native of tropical estuaries is an actor of many roles, the only octopus know to have such a talent.

It can group its legs together and change color to look like a sea snake. It can draw its arms into a wedge to mimic a sole fish. Jellyfish, sea anemones, and stingrays are among its other impersonations. 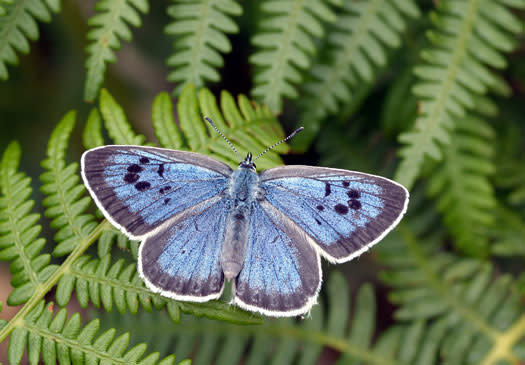 Some species are so needy. The large blue butterfly of Europe has an impostor life cycle that depends on receiving help from an entire team of other animals.

The caterpillars impersonate the grubs of a particular red ant species, going so far as to secrete the same chemicals and make the same noises. The duped ants care for the impostor caterpillars even as they devour ant grubs. After 10 months of freeloading, the caterpillars become butterflies and take off on their own.

The ants, however, are picky about neighborhoods: they only live in soil that's warmed by the sun. When Britain's rabbits died of myxomatosis in the 1950s and farmers simultaneously stopped grazing cattle, the grass got longer, the ground got cooler, the ants left, and the butterflies became endangered.

Now that conservationists understand the insect's life cycle, they've reintroduced it along with the ants and cows to graze the site. They reported this year that the blue butterfly population reached 20,000. 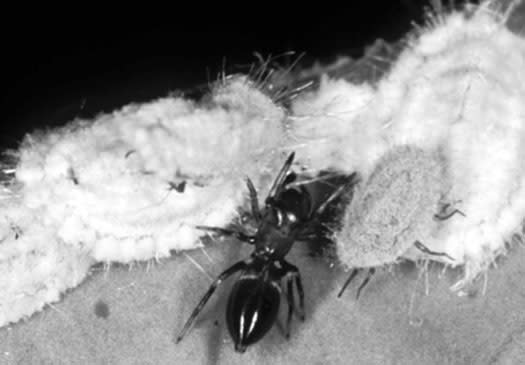 As DISCOVER has covered before, ants are pretty much the greatest creatures around. Lots of mimics therefore try to pass themselves off as ants, but one of the cleverest is this dark-footed ant spider, seen here crawling around on a leaf with some scale insects.

Besides looking like certain ants, these spiders almost always travel in groups. Why? Researchers showed that if the ant-mimicking spiders were attacked, they'd be exposed as frauds and eaten by predators with a taste for spiders. So, it's best to never be attacked at all. Why risk it? Thus the spiders travel in groups (just like the social ants do), which reduces the likelihood they'll be attacked in the first place. 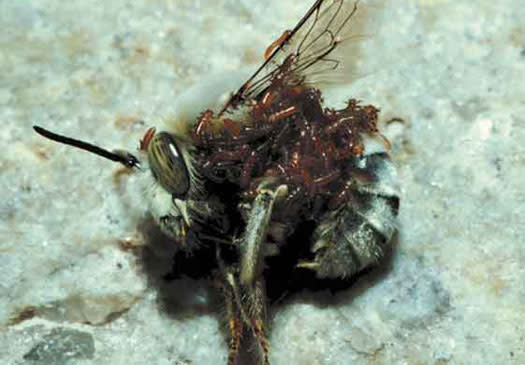 Blister beetles can be born in clutches containing 3,000 larvae. But these siblings do something most don't: work together. The larvae climb into a ball that, to a male bee, resembles the back of a female bee. They may even give off pheromones to attract the fellow.

When he climbs aboard and tries to mate, beetles cling to his underside, seen here. When he then mates with a female bee--a real one this time--they jump ship to her, hang out in her nest and steal the pollen she gathers for her young. There you have it: an insect that has evolved more or less into being an STD that affects other insects. 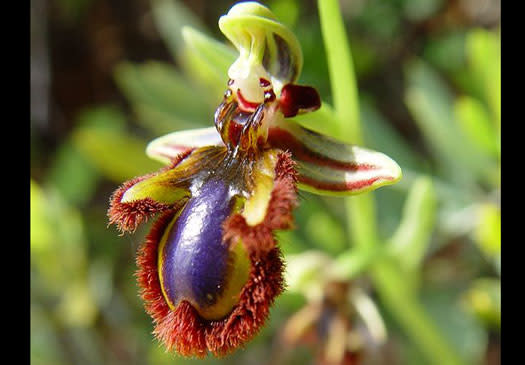 Look, if you're useful, people are always trying to take advantage of you. Given bees' necessity in the natural order of things, it should come as no surprise that blister beetles aren't the only species screwing with them.

Many orchids also look and smell like females bees, and induce males in similarly fruitless dry humping (or "pseudocopulation," if you want to be scientific about it). Orchid pollen attaches to the bee, which acts as the orchid's detachable penis, taking the pollen to another orchid. 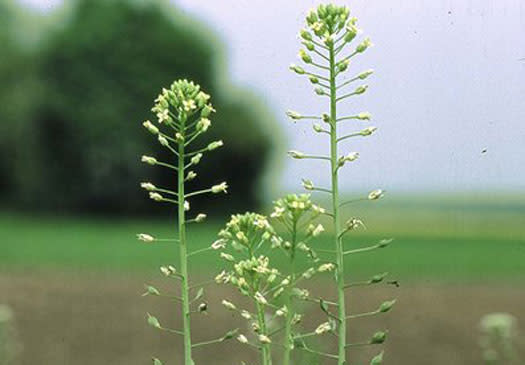 Camelina sativa is a weed, and one that has always liked to live in flax fields. Frustratingly for flax farmers, C. sativa looks a whole lot like the real crop, to the point that it's called "false flax." How did this happen? People made it happen.

Weeding out false flax artificially selected for the plants that looked most like real flax, which therefore were missed. And now we have a weed that is increasingly difficult to identify as such. This is an example of Vavilovian mimicry, after the Russian botanist Nikolai Vavilov. 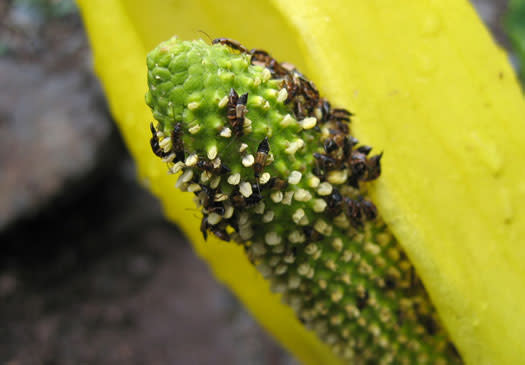 Call it odiferous mimicry. Many plants, like certain foul-smelling species of the notorious genus amorphophallus (literally, "misshapen penis"), are "carrion flowers"--so called because they mimic the stench of rotting flesh to attract insects.

In another plant group, the descriptively named tiny yellow skunk cabbage is also a carrion plant. It's seen here covered in beetles, which are pollinating it. 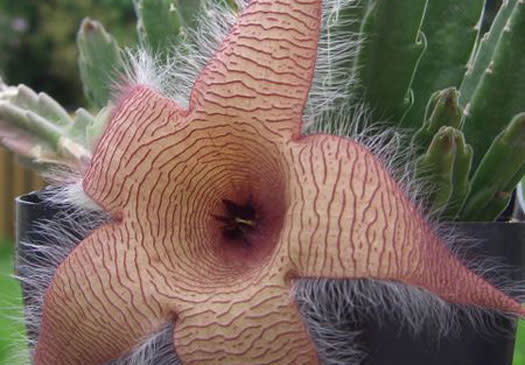 Another carrion plant, the Stapelia gigantean, may look like a starfish, but it smells like death. White hairs cover its flesh-colored petals, and the fetid smell of rotting flesh draws maggots to the sex organs in its center.

It's hard for humans to love a stinky starfish, though; it's considered a weed in Australia and an invasive species in Hawaii. 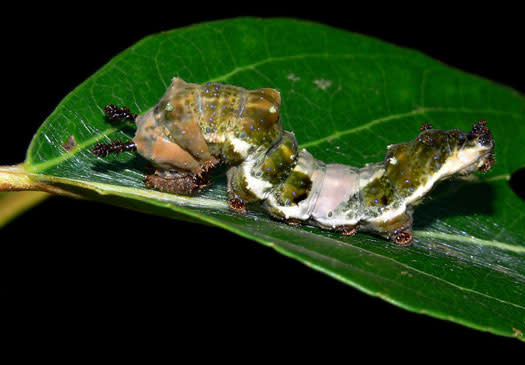 If you don't want to be eaten, then why not look like something totally unappetizing? In this caterpillar's case, it's bird droppings.

However, looking like poo isn't the only camouflage this kind of caterpillar can employ. One variety, a 2008 study says, has a hormone that controls when it changes from looking like bird droppings to looking like the leaf it lives on, which is the disguise it adopts in the last stage of caterpillar development.