An innovative community of biologists picks away at invasive species one meal at a time. 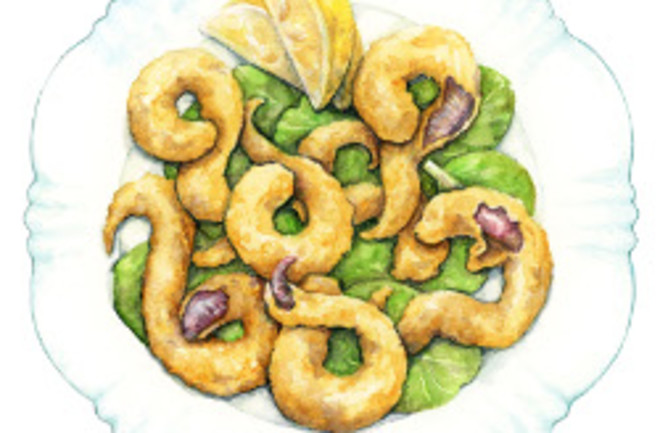 At the University of Notre Dame Environmental Research Center’s (UNDERC) field station in Michigan’s remote Upper Peninsula, more than a dozen doctoral students went beyond the bounds of academia to combat invasive plants and animals. The group spent their days collecting data for their dissertations, helping point to strategies to keep exotic species in check. But evenings at the Michigan field station saw the team experimenting with another approach to controlling invasives — eating them.

“I’ve always thought real biologists shouldn’t be afraid to eat their study organisms,” says Andrew Deines, who spent a few weeks during the past few summers at the field station wading through rivers and wetlands with his gastronomically intrepid colleagues.

Invasivorism at the center began as a fun outreach project in 2011, and it simultaneously caught fire as a national culinary trend. From backwater juke joints to fine Manhattan eateries, invasivore dishes bring awareness of an ecological problem to the table.

The invasivore biologists have graduated and dispersed to other research labs, but their zest for “eating our enemies,” as Deines puts it, lives on. Here are just a few of the dishes Deines, now a postdoctoral associate at the Michigan State University Center for Systems Integration and Sustainability, and some of his fellow biologists cooked up to take a bite out of this invasive problem.

Crawfish is one invasive that’s easy to picture as a normal cuisine, since it’s already a common Southern dish and is related to popular crustaceans like lobsters. Rusty crawfish are native to the Ohio River basin, “but they’ve become a nasty invader elsewhere,” plaguing areas in the Upper Midwest, especially in Wisconsin and Michigan, Baldridge says. It was a potluck favorite at the field station, where the team caught crawfish with minnow traps in order to dissect them back in the lab, although more than a few were diverted to the kitchen while en route.

“I put on my snorkel and fins and in 20 minutes had a bag full of them,” Barnes says of the golf ball-size snails that are scattered in lakes and rivers across North America. Though the story of how the snails spread across the U.S. is still a mystery, Barnes is certain of their palatability. To cut the mud flavor, he feeds them cornmeal for 24 hours before sautéing them in garlic and oil and serving over pasta.

After the last ice age, earthworms inched their way from the frozen grounds of the northern United States and Canada down south, Costello says, and they’ve yet to inch their way back. These detritivores consume the litterfall of dead leaves and twigs, altering nutrient cycles and exposing the soil to erosion. Though earthworms might be garden heroes, they’re surprisingly detrimental to forest ecosystems. As for their taste, “even though they’re gritty,” Costello says, they’re “not too bad.”

For those interested in experimenting, the UNDERC researchers created a web portal for sharing recipes (and stories) in the pursuit of eating edible invasives. Log on at Invasivore.org to learn more. You can even post the location of your catch on the interactive map.