If these bones could talk 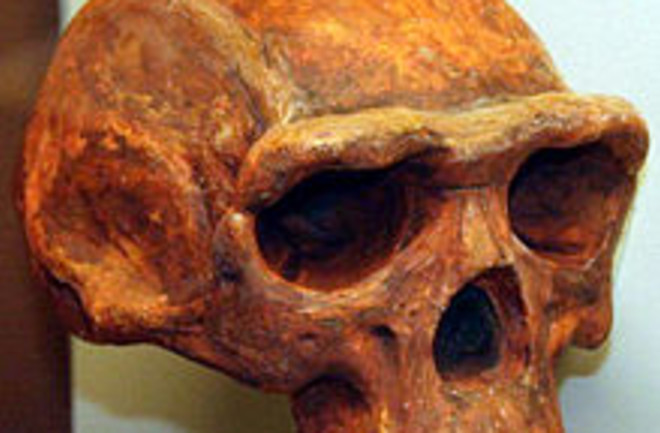 Credit: Thomas Roche By now you have probably seen the articles about how a new skull has transformed our understanding of the human family tree. The original paper is at Science, A Complete Skull from Dmanisi, Georgia, and the Evolutionary Biology of Early Homo. More colorfully you might say that this publication burns down the "bushy" model of human origins, where you have a complex series of bifurcations and local regional diversity, and then rapid extinction with the rise of H. sapiens sapiens ~50,000 years ago. In general I'm more in agreement with those plant geneticists who are skeptical of excessive fixation on the concept of species, so this is not a shock to me. To me a species concept is not a thing, but an instrument to a thing (i.e., I'm in interested in population and phylogenetics). The reason these sorts of findings overturn the orthodoxy has more to do with human cognitive intuitions about why things are categorized, than the reality of how nature arranges itself. I waited to say anything because I was rather sure John Hawks would comment on this at some point, and that point has come: The new skull from Dmanisi. As we coelacanth science bloggers like to say: read the whole thing. But I do have a small point to add: John's model of descriptively episodic and punctuated expansions followed by long equilibria of regional localization tempered by gene flow may be characteristic of many medium to large Pleistocene mammals. To see where I'm coming from, please read Genome Sequencing Highlights Genes Under Selection and the Dynamic Early History of Dogs. Focus on the section in regards to the bottleneck of wolves.