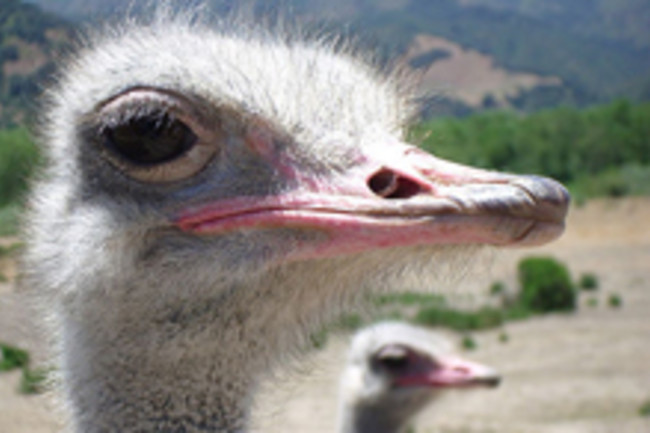 Ostriches, kiwis, emus—these birds always look out of place, bound to the land while their feathered cousins take to the sky. It's easy to imagine that flightlessness evolved only once, and that bird species then split into several species; indeed, most scientists figured that was what happened. But according to a study led by John Harshman of the Field Museum of Natural History in Chicago, that's not so: Birds lost the ability to fly at least three times. Harshman's team began to poke holes in the common ancestor hypothesis by examining DNA from the different birds to see how they were related. The researchers found that emus and kiwis were actually more closely related to a ground-dwelling but flight-capable bird called the tinamous, which lives in the Americas, than they were to ostriches. Previously, the standard explanation for the different kinds of flightless bird centered on continental drift: The common ancestor lived on Gondwanaland when the continents were close together, and the birds evolved separately into ostriches in Africa, rheas in South America, and emu, kiwis, and others in Australia and New Zealand after the continents broke apart. But this study's genetic analysis suggests that those three groups of birds all became flightless on their own, not because they came from a grounded ancestor. And they probably reached their current homes by flying there, only to lose the ability later. But why would birds lose their ability to fly? In many cases, flightless birds evolved on islands where they had no predators, so taking to the sky was never necessary. Ostriches, however, live on an African savanna full of hungry hunters, so once their flying days were over they evolved sharp claws (and they run like the wind). Still, it seems a little sad: While humans have long yearned to fly, many birds have had the ability and lost it.