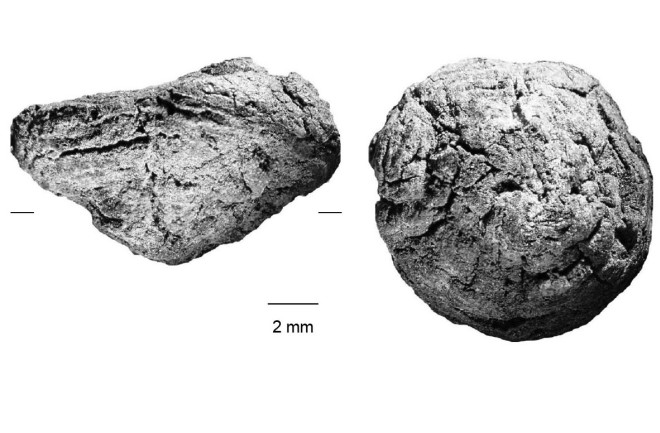 It's a matter of debate for both researchers and advocates of diets that ostensibly echo the meal plans of our ancestors: When did humans start eating starchy carbs?

Charred remains of roasted rhizomes, found in a cave in South Africa, suggest it was at least 50,000 years earlier than previous archaeological evidence indicated.

Today, plant-derived carbs account for more than half of the modern human diet worldwide. There are genetic clues that suggest this shift to a starchier diet happened around 300,000 years ago. That's when models show an uptick in genes that make digesting starch easier.

But archaeological evidence to support that hypothesis has been sparse. (Let's face it: if you hunt, kill and eat an animal, you're going to leave bones and other easily preserved bits behind. If your meal was a potato, not so much.)

Just last May, researchers working at a site along South Africa's southern coast announced the discovery of charred remains of a tuber dating to about 120,000 years ago. At the time, it was the oldest evidence of humans cooking starchy plants.

Now, however, a separate team, working in the country's northeast, has described post-cookout remnants of rhizomes that are at least 170,000 years old. Examples of modern rhizomes that may be part of your diet include ginger and turmeric. Like tubers and other plants broadly known as geophytes, rhizomes store starch in swollen underground organs.

Some geophytes are edible raw, though others can be toxic or virtually undigestible. Roasting and other cooking methods improve just about all of them, even the non-toxic varieties, by boosting general digestibility and glucose availability (for energy). Cooking them also makes peeling and chewing them easier.

Roasting rhizomes and other starchy plant material also makes finding evidence of them, tens of thousands of years later, much more likely.

Authors of the new research note that, had the plants been eaten raw, it's unlikely any sign of them would have been preserved in the archaeological record. Something to keep in mind when you hear claims that ancient humans skipped eating starchy plants.

The multiple specimens found in the ancient hearth appear to belong to the genus Hypoxis, flowering plants that include H. hemerocallidea, also known as the African potato. Researchers believe the ancient rhizomes they analyzed may belong to H. angustifolia, a species found today in much of sub-Saharan Africa and also the southern Arabian Peninsula.

According to the authors, H. angustifolia would have been a reliable, year-round food source for hunter-gatherer groups moving across the ancient Southern African landscape. The rhizome provides about 120 calories per 3.5 ounces and, note the researchers, the relative ease of digging them up could have provided an entire day's caloric needs in about two hours.