Humans Are Probably Behind the Evolution of ‘Puppy Dog Eyes’

Dogs likely evolved the gesture in response to human pressure. 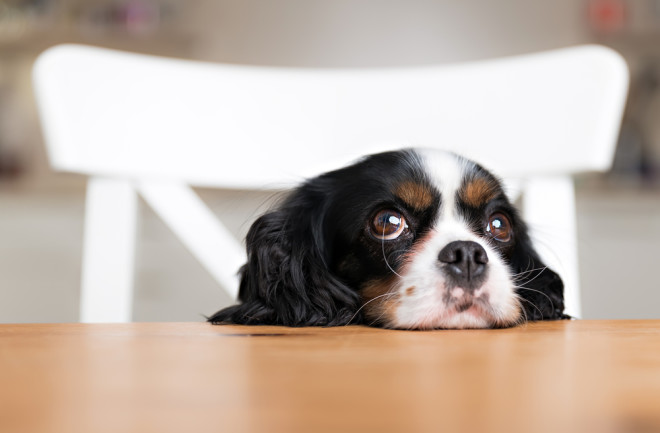 You know that look Fido gives you from underneath the dinner table? Those puppy dog eyes, researchers recently discovered, are something unique to domesticated dogs that evolved over the 30,000 or more years that we’ve coexisted.

In a study published Monday in the Proceedings of the National Academy of Sciences, researchers used dissections and behavioral analysis to compare the facial anatomy of wolves and dogs. Although their physical makeup is almost the same, domestic canines have a unique structure around their eyes, they found.

This includes a small muscle that allows them to raise their inner eyebrows more sharply than wolves can. Scientists call this gesture AU 101, but we know it as “puppy dog eyes.”

And dogs aren’t the only species to do this. Horses also make AU 101 eye movements. But other species studied, such as cats, chimpanzees, macaques and orangutans, do not.

Your dog looks up to you — literally — for commands and attention. But looking your furry friend in the eyes also stimulates the release of oxytocin, a hormone involved with social bonding in both you and your pet.

This doesn’t happen between wolves and humans though, as a 2015 study in Science revealed. Eye contact between us and our pups seems to carry special significance, and it likely serves to bond us together.

When humans brought dogs into our lives, we also began, consciously, or not, selecting for traits that we found nice or useful. This likely extends to how they move their eyes. When a dog flashes its best AU 101 at us, it reveals the whites of their eyes, or sclera. The researchers think that humans likely prefer interacting with subjects with visible sclera, hence the focus on puppy dog eyes.

The gesture also exposes more of a dog’s eye, something that might tap into another primal human urge. Other studies have shown that we prefer pets with bigger eyes, foreheads and other features that generally mimic those of infants. That can have big implications for canines — in one study, researchers found that shelter dogs who made the AU 101 movement more often were more likely to be adopted in a shorter amount of time. Just a simple muscle is enough to make us fall in love.

So, it’s probably humanity’s fault that the muscles in your pup’s eyes literally evolved to appeal to you. Next time Fido asks for scraps at the table, remember it’s because it works.