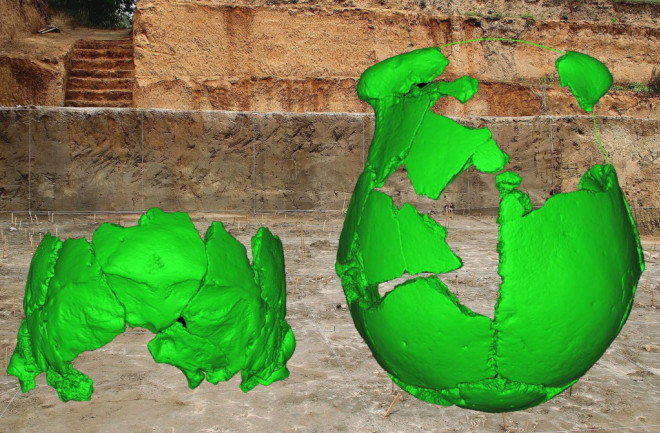 Leprechaun skulls! Kidding. The vivid green chosen for this reconstruction of two partial human crania sure does help them stand out from the background, a photograph of the site in China where they were found. Credit: Xiujie Wu. The period about 100,000 years ago was a crucial one for our species — and a time not well represented in the fossil record. A pair of partial human skulls from Central China are helping to fill in some of the mystery, but their blend of archaic and modern Homo sapiens traits, as well as some Neanderthal characteristics, are also raising new questions. We modern Homo sapiens are, biologically speaking, true new kids on the block. Paleoanthropologists conventionally put the date of our emergence as a species at less than 200,000 years ago, in Africa. By that time, multiple other members of our genus had already explored much of Eurasia, from Neanderthals and their predecessors in much of Europe to the mysterious hominins of Dmanisi in the Republic of Georgia, from the hominin formerly known as Java Man (now known as Trinil 2) in Indonesia to Peking Man on the outskirts of Beijing. And don't even get me started on the Denisovans, who may well have already scampering about Siberia during the period. The exact timing of modern Homo sapiens' migration from Africa has remained a point of contention between paleoanthropologists, with ever earlier dates proposed. Some researchers argue that modern humans emerged regionally, not just in Africa but in two or more spots in Eurasia. Now, researchers have described two partial human skull fossils from Lingjing, Xuchang in central China that have what scientists call a mosaic of traits: a little bit old, a little bit new, a little bit odd and all of it a unique blend. The partial crania, known as Xuchang 1 and 2, are at least 100,000 years old but may be up to 125,000. Full disclosure: neither the site nor the partial noggins are new to science. The crania were excavated between 2007 and 2014, and other human remains from different periods have been found at the site, which previously prompted some rather breathless reporting in the Journal of Xuchang University.

Today's study, published in Science, focuses on what the two human skulls had in common with their hominin contemporaries. Xuchang 1 is the more complete of the two partial skulls, and is also noteworthy for its size. Without any bits from the neck down associated with the skull, the researchers can't estimate the individual's height, but even if he was a biggun, he shows "marked encephalization," according to the paper, which means he had a big brain, a modern trait. Xuchang 2, while not as large, appears to have had a modern size braincase as well. Other traits that the pair share with early modern humans include a more lightly built cranial vault (where the brain sits) and brow ridges that are less pronounced than other humans, including Neanderthals. On the other hand, Xuchang 1 and 2 have a few traits seen in more archaic humans from eastern Eurasia, notably a braincase that's low and broad. And just to keep things interesting, the shapes of the rear of the Xuchang skulls, and the bony labyrinth of the inner ear of both specimens, are distinctively Neanderthal. The combination of old, new and Neander-ish has never been seen in a single individual before. It's not yet clear what this unique trait potpourri means for the bigger picture of human evolution. It does, however throw one more monkey wrench in the old school "Out of Africa" belief that our species did all its evolving on that continent before setting foot on other continents. Instead, Xuchang 1 and 2 seem to bolster the Regional Continuity Model, which suggests that modern humans evolved regionally, from one or more archaic humans. Even if you go whole hog on the Regional Continuity idea, however, it still doesn't explain why the Chinese fossils have distinctively Neanderthal features — no Neanderthals have been found east of Siberia.

The study does not mention whether the researchers have attempted to extract ancient DNA (aDNA) from the either the human skull fragments or the additional partial hominin fossils found at the site. The good news: the petrous bones in both Xuchang 1 and 2 appear to be at least partially preserved. Why does that matter? Well, petrous bones, at the base of the skull behind the ear, turn out to be a hotspot for preserving aDNA. You can bet that if there's aDNA in them there petrous bones, scientists will try to extract and sequence it, potentially helping us understand where the Xuchang Clan fit in the Homo sapiens story. Stay tuned.