• A Stone Age Murder MysteryIn the decade since a 5,300-year-old freeze-dried body was pulled from a melting glacier in Austria, theories have been advanced about the cause of death. He got caught in an autumn storm, fell into a crevasse, and froze to death. No, he was carried up the mountain in spring and served as a human sacrifice. Or was it arthritis or malnutrition that killed him? Finally, the verdict is in. The Tyrolean ice man Ötzi was shot from behind with an arrow.

The jury on the case, doctors at the General Regional Hospital in Bolzano, the Italian town where Ötzi now rests, discovered the flint arrowhead on X rays while searching for fractures; CT scans confirmed the verdict. Lodged less than an inch from Ötzi's left lung, the arrowhead not only paralyzed his left arm but also shattered his shoulder blade, tearing major blood vessels and causing him to bleed to death, probably within hours. So why did it take investigators 10 years to determine how the ice man died? Apparently the arrowhead escaped detection because radiologists were looking for bone fractures, malformations, or signs of illness—not for arrows.

The motive for the murder remains a mystery. Perhaps Ötzi was ambushed from behind by a rival who was trying to steal his sheep. Or he could have died in battle, says lead detective Eduard Egarter-Vigl, the pathologist who helped coordinate the scientific investigation of the ice man. Bows and arrows were commonly used during this epoch for hunting, so there's no reason to believe they weren't used for fighting too. In any case, it's clear now that Ötzi's end was not a peaceful one. "He died not naturally," says Egarter-Vigl, "but by violence." — Josie Glausiusz

• From Our Faithful Correspondent

The editors of Discover wondered recently how the father of evolution would view the arguments bubbling up in the field of human origins, so we asked contributing editor Joseph D'Agnese what Charles Darwin might have said if he were around today:

To the Editor, Discover: 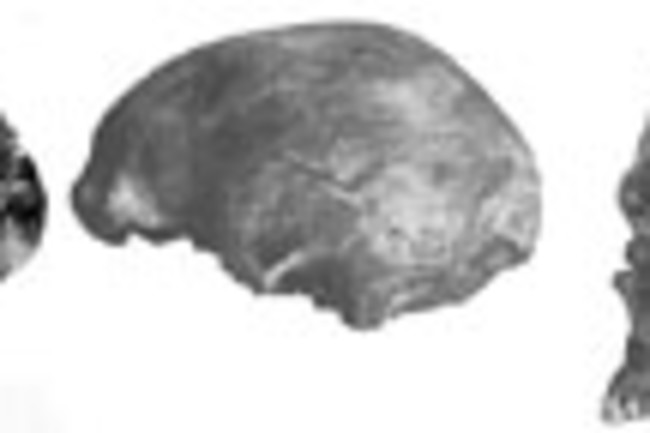 Did all Homo sapiens originate from one tribe in Africa? Paleoanthropologist Milford Wolpoff argues that ancient Homo sapiens skulls found in far-flung regions reveal evidence that both European and African ancestors could have given rise to modern humans. His theory is based in part on comparative analysis of skulls from three locations: (left to right) Belgium, Moravia, and Israel.

I am in receipt of your kind request for news of developments in human evolution in the last year. If you are willing to permit a fossil to comment on other fossils, I shall be delighted to oblige.

Last year paleoanthropologists nearly engaged in fisticuffs over the birthplace of Homo sapiens. Did modern man migrate out of Africa and replace Neanderthals 100,000 years ago? Or did our species decamp from Africa much earlier as hoary, small-brained Homo erectus and evolve simultaneously in several different places across the globe? The out-of-Africa chaps insist their genetic finds conclusively support man's single African origin. But the science of wresting genes from ancient carcasses dates only to 1997.

The Australians kicked off the imbroglio in January with the discovery that mitochondrial DNA extracted from the remains of the anatomically modern, 60,000-year-old Mungo man, found near Lake Mungo in New South Wales, does not match modern human DNA. The team argued that ancient aboriginal predecessors such as Mr. Mungo and his friends—who possessed both frame and countenance not unlike our own—evolved in their time, on their blessèd plot, in the 2 million years since Homo erectus left Africa.

In February a team of Chinese and Australian scientists announced that they had redated the Chinese Homo erectus fossils called Nanjing man. Once believed to be 400,000 years old, the fossils were found to be 580,000 to 620,000 years old after calculating the ratio of thorium to uranium in the limestone layers above and below the dig site. If the dates hold up, it means modern Asians could have easily evolved in isolation. They would not have had to wait for African Homo sapiens to clamber over the steppes 100,000 years ago. The roots of the Asian family tree were already firmly planted.

The challenges didn't end there. At the University of Michigan, paleoanthropologist Milford Wolpoff—multiregionalism's most visible spokesman—weighed in with a paper describing how his team had analyzed 25 ancient skulls from throughout the Old World and determined that three relatively recent ones displayed both local and African ancestry, a finding con-sistent with multiregionalist theory. At the State University of New York in Oneonta, the anthropological geneticist John Relethford showed that just because Neanderthal DNA does not match that of living people does not mean Homo sapiens never consorted with them. The out-of-Africa contingent has been insisting for years that Cro-Magnons simply replaced Neanderthals and that there was no crossbreeding of the species. Remember: If crossbreeding was common, then the evolve-and-replace tenet would begin to look frightfully simplistic.

Just as a number of out-of-Africa chaps were becoming comfortable with the notion that perhaps there had been some hybridisation of the species, a team of scientists from the United States, Finland, Hungary, and South Africa played both sides against the middle. Their analysis of 61 modern humans and some great apes found significant genetic attributes popping up not just in Africa but arising on their own in geographic pockets the world over. Their conclusion: "We suggest that both the out-of-Africa and the multiregional models are too simple to explain the evolution of modern humans."

As you can see, the muddle becomes muddier. I am pleased that you and your staff enjoyed the tropical worms I sent. Next time, perhaps, some carnivorous beetles.

Until then, I remain your faithful correspondent,