Human-Neanderthal Mating Left Its Mark in the Human Genome 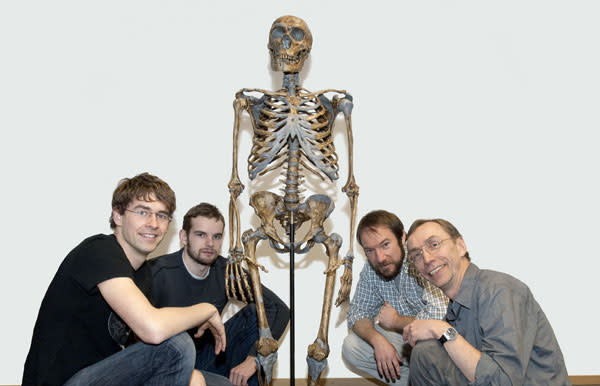 Ever since anthropologists figured out that early humans and Neanderthals coexisted for a span of prehistory, they've wondered--did the two species, you know, make friends? Now a fascinating new genetics study reveals that Homo sapiens and Neanderthals did indeed interbreed, and the evidence is still to be found in the human genome.

Researchers from Germany's Max Planck Institute for Evolutionary Anthropology first sequenced the entire Neanderthal genome from powdered bone fragments found in Europe and dating from 40,000 years ago--a marvelous accomplishment in itself. Then, they compared the Neanderthal genome to that of five modern humans, including Africans, Europeans, and Asians. The researchers found that between 1 percent and 4 percent of the DNA in modern Europeans and Asians was inherited from Neanderthals, which suggests that the interbreeding took place after the first groups of humans left Africa.

Anthropologists have long speculated that early humans may have mated with Neanderthals, but the latest study provides the strongest evidence so far, suggesting that such encounters took place around 60,000 years ago in the Fertile Crescent region of the Middle East [The Guardian].

The study, published in Science and made available to the public for free, opens up new areas for research. Geneticists will now probe the function of the Neanderthal genes that humans have hung on to, and can also look for human genes that may have given us a competitive edge over Neanderthals.

Erik Trinkaus, an anthropologist at Washington University in St. Louis, who has long argued that Neanderthals contributed to the human genome, welcomed the study, commenting that now researchers "can get on to other things than who was having sex with who in the Pleistocene" [AP].

For a much deeper dive into these issues, head to Carl Zimmer's post at The Loom and Razib Khan's post at Gene Expression.

Gene Expression: Breaking: There's a Little Bit of Neandertal in All of Us

80beats: We May Soon Be Able to Clone Neanderthals. But Should We?

80beats: Rough Draft of the Neanderthal Genome is Complete!

asks whether we rubbed out Neanderthals, or rubbed off on them Image: Max Planck Institute EVA. The researchers hang out with their Neanderthal relation.