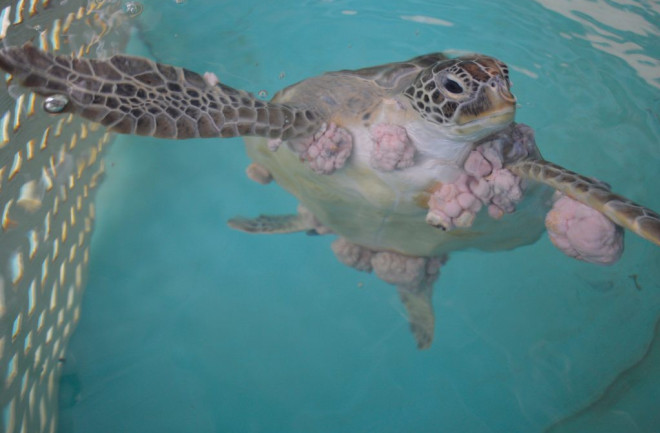 Before this study, virtually nothing was known about fibropapillomatosis. But a group of Florida scientists wanted to learn about the dynamics of the turtles and the tumors, including the genes that contribute to their growth. The researchers compared how genes were expressed in sea turtles suffering from fibropapillomatosis to gene expressions in those without the disease, finding that the tumors are similar to human cancer types like basal cell carcinoma (BCC) and tumors in neural cells. Researchers then tried treating the growths similarly to how they would in humans — surgical removal and drugs.

Fibropapillomatosis often grows in a sea turtle's eye region, debilitating their vision. (Credit: Rachel Thomas) When surgically removing a turtle's tumor, there’s a 60 percent chance of regrowth. However, researchers found that when surgical removal was paired with topically-applied fluorouracil, a cream often used to treat BCC, tumor regrowth rates dropped to a mere 18 percent. Researchers believe sunlight contributes to the growth of fibropapillomatosis, which is also a leading cause of many human skin cancers. Though, future research is necessary in order to determine the exact role that sunlight plays in causing the growths. Not only has this study improved understanding of a problematic diseasing impacting sea turtles, it also paves the way for more precision wildlife medicine.