A study shows that elephants’ activity in these areas varies, likely according to their perceptions of the threat of human activities. 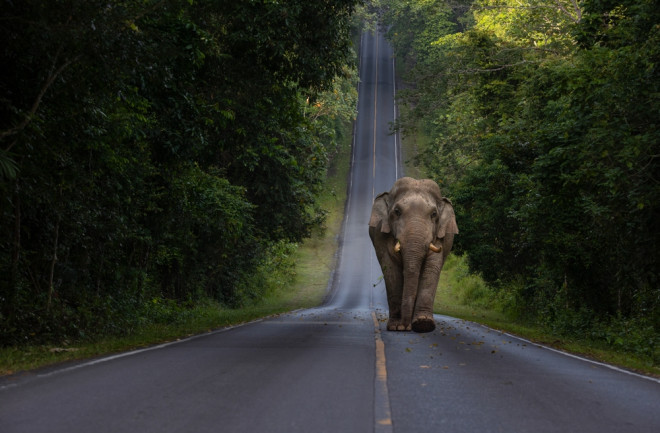 Wildlife corridors are areas, such as nature preserves, overpasses and underpasses, that connect habitats that humans have separated. These areas act as safe spaces for all sorts of animals to move around, including elephants. And yet, according to a study in Frontiers in Conservation, human activities seriously affect animals’ use of these spaces. Assessing these effects for the first time, this study shows that elephants cross wildlife corridors according to their perceptions of varying human threats.

Human encroachment reduces animals’ abilities to move and migrate in search of resources. As such, it constitutes a significant challenge for the conservation of elephants across Asia and Africa. Conservationists tend to agree that wildlife corridors assist elephants in overcoming this challenge, though little is known about the effect of nearby human activities on elephant’s use of these corridors. This study looks to resolve this gap in knowledge.

“This is the first study of this type that takes an in-depth look at comparing how [human] land-use affects elephant movements and their use of wildlife corridors,” says Tempe Adams, a study author and researcher for Elephants Without Borders, in a press release.

The study shows that elephants travel through these areas according to their assessments of the risk of human interaction. For instance, while elephants tend to use urban corridors less than agricultural corridors, they also use these types of corridors at different times of the day. This is likely due to a careful consideration of the different dangers found at day and night.

“What is truly remarkable is that we found elephants do not perceive all human development the same way, but they are adjusting their behaviors to adapt to the variations,” Adams says in a press release.

Ultimately, the study stresses the importance of understanding the activity of animals around urban, as well as agricultural areas. “It also further highlights the need for transparent documentation of human pressure within and around protected wildlife areas, which is critical to assist in the conservation of species,” Adams says in a press release.

They also found that the elephants used the urban corridors during the day and night, with a 26.8 percent overlap with human activity. Whereas the elephants that used the agricultural corridors during the night, had a 9.1 percent overlap with human activity. This, they say, could be because agricultural interactions tend to be risker for elephants, meaning they are more important for elephants to avoid.

“The perceived level of threat of different human activities could be reflected in the elephant’s use of the corridors,” the team concludes in their paper. “To minimize interactions with humans, elephants can avoid areas of high risk, where the presence or absence of elephants in an area changes throughout the day.”