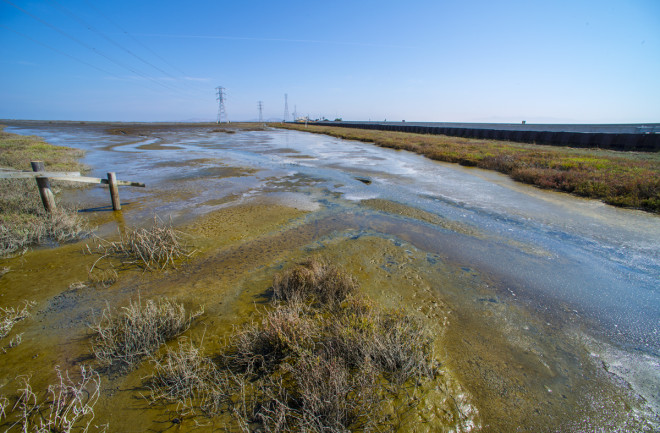 Susannah Tringe grabs a pair of green rubber boots from the back of her truck, pulls them on and wades into a pea-colored pond until she’s standing calf-deep. We’re just a few miles from Google’s main campus in Mountain View, Calif., but from where we’re standing, Silicon Valley’s urban sprawl is just a faint, hazy blur. Stilt-legged birds skitter along the banks of the pond; cord grass and still water stretch to the horizon.

“This is really mucky,” says Tringe, an environmental microbiologist at the U.S. Department of Energy’s Joint Genome Institute. “You sink in at every step.” She bends down to take a murky water sample, then holds the cup up to the light.

“That looks disgusting,” laughs Susie Theroux, a postdoc in Tringe’s lab who still wrinkles her nose at the sight of the viscous gunk.

The wetland sludge Tringe and Theroux are sampling isn’t just any muck. It holds carbon dioxide-processing microbes that play a key role in climate change dynamics. Wetlands are widely valued as natural pollution filters and as habitat for endangered species such as the Yuma clapper rail, whooping crane and least tern. But they’re also a key part of the carbon cycle: Although wetlands cover only about 3 percent of Earth’s surface, they account for as much as 30 percent of soil carbon storage. Yet some wetland microbes secrete another potent greenhouse gas, methane, which may cancel out some of the benefits of pulling carbon dioxide from the atmosphere. Tringe is trying to determine just how much wetlands actually help offset climate change.

Those answers will come none too soon. Because of development and sea-level rise, the U.S. loses more than 80,000 acres of wetlands each year, according to a study by the U.S. Fish and Wildlife Service. To offset those losses, as required under the Clean Water Act, the government invests at least $3.9 billion each year to restore degraded wetlands or construct new ones to reach an annual net increase of 100,000 acres of wetlands. By documenting the biological functions of wetland microbes, Tringe will learn how these tiny organisms affect the greenhouse gas equation, and eventually she’ll be able to help restoration experts design projects in a way that enhances climate benefits.

To figure out just how microbial processes in wetlands work, Tringe and her team are building a catalog of wetland microorganisms and the biological tasks they carry out. “We’ve been collecting samples in a lot of places to analyze DNA and RNA,” Tringe says. “We’re generating the wetlands metagenome.”

Tringe began exploring this idea of teasing out microbial functions in wetlands after joining the Joint Genome Institute in 2006. She knew it would be a tall order to sequence the complete genome of every single microbe in a given wetland area; the computing power required would be staggering, and many microbes don’t survive long when cultured in the lab.

But thanks to a mid-2000s postdoc stint with geneticist Edward Rubin at Lawrence Berkeley National Laboratory, Tringe had a potential solution. Rubin introduced her to a then-novel discipline called metagenomics, which involves sequencing the collective genome of all the microbes in a given location.

To perform this type of sequencing, scientists use chemicals to extract the genetic material from an environmental sample — say, a cup of dirty water — which typically contains many different organisms. They run cloned snippets of the extracted material through a sequencing machine, which reads out the nitrogen, sugar and phosphate bases that make up each short segment. After these segments are pieced back together, they reveal the distinct gene sequences of the millions of microbes in the sample. The result: a broad overview of the microbial community and the functions each microbe performs within the ecosystem.

The approach has turned out to be a perfect fit: It’s given Tringe a wide-ranging snapshot of the biological processes at work in wetland microbial communities. If she finds a large number of genes governing processes that tuck away carbon dioxide, for example, the wetland likely has high carbon storage potential. But if she finds many genes that code for processes involved in methane production, the wetland may be contributing high levels of this potent greenhouse gas to the atmosphere.

Before Tringe’s team can perform this genetic analysis, though, they have to get the raw material. As we stand on the bank of the salt pond, the midday sun beating down, Theroux brandishes a 3-foot-long instrument that looks like a fat blowgun. “This is what we call our intact corer,” she explains. “It maintains the soil sample as it was.” Wearing a pair of waders, she sloshes into the pond. Submerging the end of the corer, she twists the blade assembly and pulls up a sample from the bottom. It has the appearance and consistency of chocolate ice cream, but it smells like bad breath. Theroux transfers the mud to a jar so that it can be run through DNA and RNA sequencers back at the lab.

Tringe’s sampling has turned up some evidence that certain landscape characteristics influence microbial populations in ways that affect greenhouse gas emissions and carbon storage. Saltier wetland areas, for example, tend to attract microbial communities that give off less methane, as do areas with more active water flows. “We’re starting to be able to predict which sites might produce more or less methane,” Tringe says. “We might be able to say, ‘Right here, it would be better if there were lots of fresh water coming in.’ ” Tringe and her team initially thought wetland soil with lots of organic matter might attract methane-producing microbes, but they’ve since found that’s not usually the case — which means it could be highly suitable for restoration projects.

But that doesn’t mean wetlands shouldn’t be restored, she says. Tringe suspects these wetlands probably do not sustain high methane production for long. As initial rapid plant growth levels off, she believes, microbial communities’ methane production will also slow — and meanwhile, the wetlands are still storing massive amounts of carbon. “If for the next few centuries they’re carbon sinks, they’ll make up for those methane emissions we see in the first few years,” she says.

Data are still limited, so Tringe cannot definitively say how wetland restoration planners can best limit emissions while keeping carbon storage processes intact. She and her team are planning many more sampling missions to expand their genetic Rolodex.

Ultimately, Tringe wants to create computer simulations that would allow wetland experts to analyze the potential greenhouse gas effects of various restoration strategies, such as tweaking salinity, introducing moving water or adding plants. But what fires Tringe’s imagination even more than shaping wetlands’ environmental legacy is mapping a microbial universe that has long been shrouded in mystery.

“The analogy we use is the human genome. Most medical research today heavily depends on it, but people don’t think about the fact that it had to be generated,” she says. “If you have a better blueprint, you’re going to have a much better chance of really understanding the wetlands.”

This article originally appeared in print as "Small Wonders."