How to weigh dinosaurs with lasers 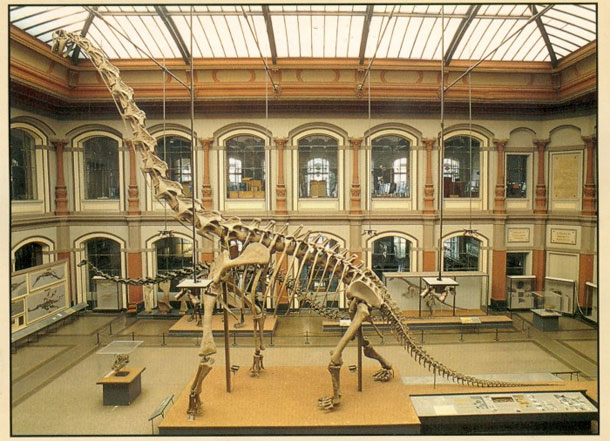 The largest mounted dinosaur skeleton in the world towers over visitors in the central hall of Berlin’s Museum of Natural History. It belongs to Giraffatitan

, an animal formerly known as Brachiosaurus (the big one from the opening act of Jurassic Park). From the bones, we can tell how long and tall Giraffatitan was, but how much did it weigh? The dinosaur’s flesh has long decayed, but Bill Sellers

from the University of Manchester has developed a new way of reconstructing its physique and estimating its weight. By laser-scanning the skeleton, and wrapping skin around its virtual bones, he calculated that this particular Giraffatitan weighs in at a hefty 23,200 kilograms, or 23.2 tonnes. And no matter what the university’s press office would like you to believe (more on this later), that’s virtually identical to the best current estimates. There are two typical approaches for estimating the weight of fossil animals. You can compare the lengths of certain bones with those of known animals, assume that its mass scales accordingly. This is the predictive regression approach, and it can be unreliable. Skeletal features can vary greatly and they may not relate to weight in the same way between different animal groups. The alternative is the volumetric approach: you draw an outline of its body, estimate how much volume it took up, and multiply that with its predicted density. It’s better, but drawing the outline is both subjective and laborious. Sellers has devised a third option. He scans an entire skeleton and his software automatically stretches a virtual skin over the outline as tightly as possible. This estimates the volume of the animal, albeit of an emaciated unrealistic individual. When Sellers tested this technique with 14 mammal skeletons, from a wild boar to an African elephant, he found that it underestimated the weight of all the species. You’d expect that – after all, the virtual reconstruction doesn’t include any muscles or organs. The point is that the technique consistently underestimated the animals’ weight by around 21 per cent. You can just take the former, multiply it by 1.21 and get the latter. The relationship between the predicted and actual weight is remarkable in its reliability. Sellers thinks that this is because most of the missing volume in the virtual models is from the limbs muscles, which make up a fairly fixed proportions of a mammal’s mass, regardless of its size. Sellers then applied his method to Berlin’s famous Giraffatitan and got a value of 23.2 tonnes. Obviously, it’s not clear if a technique that was calibrated against large mammals would apply to dinosaurs, or other groups like reptiles or birds. Sellers acknowledges this, and plans to test his technique in a wider range of animal groups. There are other potential issues. Mike Taylor from the University of Bristol and SV-POW

has estimated the weight of Giraffatitan before, and thinks that around 70 per cent of its volume comes from the torso. And reconstructing the torso is very difficult for large dinosaurs, because the ribs are often poorly preserved or distorted. Taylor also says that using a single density value isn’t that appropriate for brachiosaurs. “The very long neck likely had a density no more than half that of the legs,” he says. For the moment, it’s encouraging that the new estimate is very close to previous ones. You might not get that from the press release (and probably most of the resulting coverage). It leads with “Dinosaurs lighter than previously thought”, and follows with “Previous estimates of this Brachiosaur's [sic] weight have varied, with estimates as high as 80 tonnes, but the Manchester team's calculations – published in the journal Biology Letters – reduced that figure to just 23 tonnes.” While it is true that the weight of Giraffatitan and Brachiosaurus have varied wildly over the years, the most recent estimates have been nowhere near the cherry-picked 80-tonne figure. Indeed, in 2009, Taylor concluded that Giraffatitan weighed 23,377 kilograms

, or 23.3 tonnes. Sellers’ new estimate shaves off a mere 177 kg from that figure – around 2 humans from a dinosaur that weighed as much as 300. Taylor used the volumetric method to get his result. If his result was exactly the same as the new figure, one might question whether Sellers’ method adds anything new. It does, however, have several benefits. “It requires no irreproducible judgements on the part of the person using it, and it's ground-truthed on solid data from extant animals,” says Taylor. It’s also automated. If it truly works for dinosaurs, we can weigh these extinct beasts as quickly as the laser-scanner can be wheeled around a museum. Even with the caveats, Taylor says “It’s an important new method which I expect to see widely adopted.” Reference: Sellers, Hepworth-Bell, Falkingham, Bates, Brassey, Egerton & Manning. 2012. Minimum convex hull mass estimations of complete mounted skeletons. Biology Letters http://dx.doi.org/10.1098/rsbl.2012.0263

for the story tip More on sauropods