How to Deliver a Bouncing Baby Amoeba

Physicist Elisha Moses of Israel's Weizmann Institute of Science studies the molecular motors that drive cell division. One day a student in his lab noticed something odd. An amoebic "midwife" had barged into a dividing amoeba, splitting it into two daughter cells.

These amoebas— parasitic microbes that live in the guts of snakes— transmit chemical signals if they can't manage to pull themselves asunder, says Moses. He found that fluid from the furrows of dividing cells attracted fellow amoebas, presumably so they could lend a helping pseudopod. Understanding such microbial signaling, one of the most primitive forms of social behavior, might lead to better treatments for amoebic dysentery. 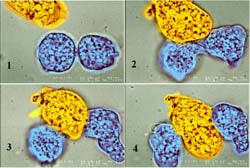 Courtesy of Weizmann Institute of Science