How These Birds Look So Incredibly Black 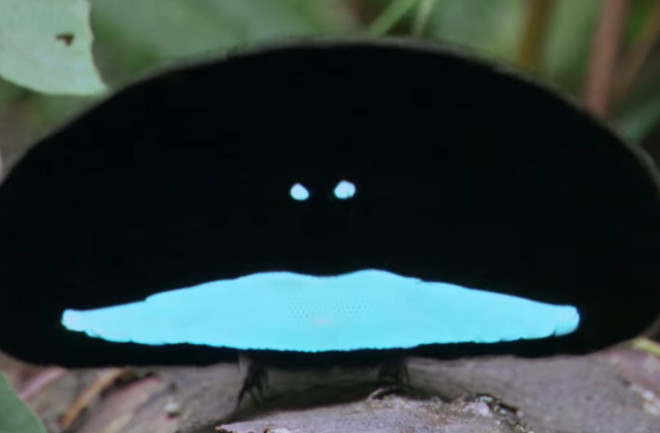 A bird of paradise spreads it feathers as it engages in a mating dance. (Credit: BBC/Youtube) Vantablack has been called the world's darkest substance. When it was unveiled in 2014, the material made headlines for the way it seemed to leach objects of their three-dimensionality; it was so black that every feature merged into a black hole. Darker than a black bear in a cave on a starless night, Vantablack looks downright otherworldly. But, humans are hardly alone when it comes to inky excess. Some birds, of a type normally associated with brilliant plumage, have feathers that rival the substance's light-stealing prowess, say a group of researchers in a paper published Tuesday in Nature Communications.

For male birds of paradise, the competition for a mate is fierce and deeply involved. The birds clear and decorate small areas in the forest to serve as wooing grounds, hop and twist about in an elaborate dance once a potential partner has arrived and puff themselves up to display intricate colored patterns to try and seal the deal. And for these patterns, having the deepest of blacks seems to be an advantage. Normal black feathers have a sheen to them that betrays the surface — these look like more like a void, and that makes the other colors shine all the brighter. Researchers from Harvard and Yale Universities looked at several bird of paradise species whose colorful patterns were surrounded by incredibly black feathers, an effect that likely serves to heighten the contrast between them. The effect could even give the plumage a luminous quality, they say, a bit of visual trickery that extreme contrasts between light and dark can bring. The end effect is to make the birds more noticeable, and thus more likely to land an interested female.

With a host of imaging techniques, the researchers examined feathers from the birds on a microscopic level and found that they were much more intricate than feathers from birds that were conventionally black. Where normal bird feathers have single spines that lay in the same plane as the main stem, the birds of paradise had feathers that branched into numerous tiny barbules that curved up and toward the feathers' tips. The tiny spikes form a complex array of deep cavities that serves to bounce incoming light around inside the structure, as opposed to reflecting it back out, the researchers say. The more light bounces, the more opportunities there are for it to be absorbed, and birds of paradise are so effective at bouncing light around that they suck up 99.95 percent of it. Vantablack, by contrast, absorbs a bit more than 99.96 percent of light — less than two tenths of a percent more. Coincidentally, Vantablack also absorbs light by bouncing it around a network of tiny nanotubes. Mother nature got to the solution long before us though, it seems.