How These Animals Stay Forever Young 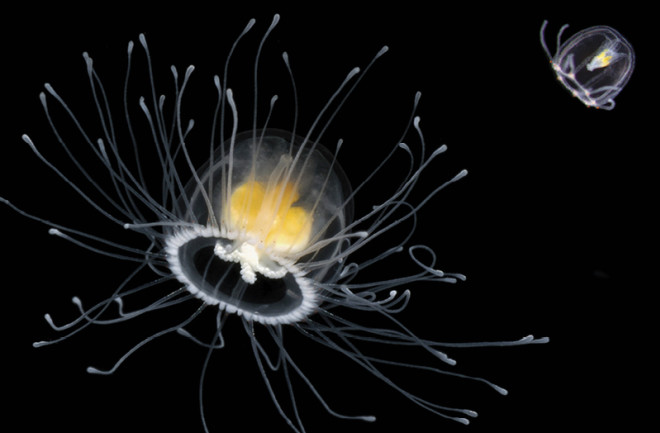 Once we turn 30, our odds of dying doubles every eight years. The formula that churns out that grim statistic is known as the Gompertz–Makeham law, named after the pair of nineteenth-century actuaries who worked it out, and those odds have remained about the same even as modern medicine has advanced.

Humans aren’t the only ones whose mortality can be summed up by the equation. Although that key age will differ if you’re a mosquito or a horse, nearly all animals see their likelihood of death rise sharply as they get older.

But it’s becoming clear that the Gompertz–Makeham law is not universal. A handful of remarkable creatures don’t appear to age—that is, they show no signs of deterioration as they advance in years. Though they will still perish one day from starvation or predation or freak accidents, their abilities to combat disease and produce offspring endure right up to the end.

How these species manage to dodge the aging process has long baffled scientists, but some are finally beginning to divulge their anti-aging secrets. They are also revealing that there’s more than one way to escape senescence.

Sipping from the Fountain of Youth

For naked mole rats, looks can be deceiving. With their bald, wrinkled bodies, they may appear to be aging poorly, but senior mole rats are actually the picture of good health. Rochelle Buffenstein should know. Her laboratory colony at the longevity-focused biotech Calico contains a 35-year-old mole rat—the oldest on record. What’s remarkable is not only that they can outlive other rodents of similar size by a factor of 10, but that they also remain in tip top shape throughout their long lives.

Buffenstein is trying to find out how the mole rats swing it. She initially suspected their cells were exceptionally well-armed against oxygen’s toxic effects, which are believed to induce aging. The oxygen that organisms consume gets transformed in the body into reactive oxygen species (ROS)—highly destructive molecules that rip electrons off of nearby proteins and DNA. Over time, damage builds up in the cells as a result.

Antioxidants act as a first line of defense against ROS by preventing their formation or neutralizing them. So, she initially thought that the mole rats were launching superior antioxidant defenses, but experiments refuted that hypothesis.

Next, she speculated that naked mole rats were skilled at repairing their cellular damage. Much to her surprise, she found that heavy damage accrued even in very young animals. Buffenstein surmises that the rodents have found alternative ways to cope with all that damage, as it doesn’t seem to hinder them. “Rather than waste a lot of energy keeping their room as pristine and clean as it can be, they tolerate a higher level of damage than a mouse would,” she says.

By contrast, age-defying sea urchins and quahog clams keep damage from building up in their cells in the first place. The longest-lived sea urchins rival the oldest humans, while quahog clams can survive an impressive 500 years or more. A steady lifelong supply of antioxidants likely has something to do with it, says Andrea Bodnar at the Gloucester Marine Genomics Institute. “The other part of the story is that some [sea urchin species] have a fairly low metabolic rate, especially compared to mammals.” By leaking out fewer ROS molecules, their sluggish metabolism ensures that their cells stay spick-and-span.

Determined to conquer aging, sea urchins have devised yet another strategy. Their extended youth may be partly down to their telomeres—stretches of DNA that shorten with age in most animals. Telomeres are like the sheaths that cover the tips of shoelaces. They cap the ends of chromosomes and protect them from degrading. Each time a cell divides, its telomeres shrink a little. When they get too short, the cell stops dividing altogether and enters an inactive state. Eventually, the gradual depletion of cells cripples the body’s ability to renew things like muscle and components of the immune system.

But sea urchins maintain their telomere length through time, says Bodnar. Because their telomeres don’t shorten, their cells never cease dividing and that ongoing cellular activity may prevent these creatures from declining.

It’s a strategy that’s likely employed by some bats as well. Recent research suggests that some bats — the longest-lived mammals relative to body size — also keep their cells happily proliferating by preserving their telomeres. Members of the Myotis genus have been known to stay alive and healthy for more than 40 years—a feat they likely accomplish with the help of their unfaltering telomeres.

Having your cells quit on you wouldn’t be so bad if you were constantly pumping out armies of fresh new ones to replace them. That’s just the ticket to agelessness for tiny aquatic flatworms called planaria and tube-shaped creatures known as hydra, says James Coffman at the MDI Biological Laboratory. “I think of hydra and planaria as basically forever young.” Planaria are composed of one-third pluripotent stem cells, he says, which can spawn a variety of body cell types to replenish the ones that have gone out of commission. Similarly, hydra are essentially small sacs of stem cells.

While most animals lose the ability to make stem cells as they age, hydra produce them throughout their lives. Thomas Bosch at Kiel University in Germany traced the hydra’s never-ending supply of stem cells to a gene called FOXO. Equivalent genes in humans have been linked to longevity; centenarians, for example, are likely to carry a specific variant of FOXO3. “We nearly fell off our chairs when we realized that one of the major transcription factors expressed in [hydra] stem cells is FOXO,” says Bosch.

He is discovering that stem cells are just one of the tools in the hydra’s arsenal. The same gene that controls their stem cells also seems to keep their microbiomes—the communities of microbes that inhabit their bodies—in check. Evidence is mounting that a healthy microbiome can help fight aging. For instance, the African killifish lives a fleeting life, expiring just a few months after birth. But when one of Bosch’s colleagues transplanted gut microbes from young African killifish into old ones, not only did it extend their lives, but it also boosted their activity levels; elderly fish began acting youthful again. Bosch believes hydra microbiomes serve a similar role in their mission to overcome aging.

The Jelly That Lives Forever

Ordinarily, jellyfish are born from eggs and grow into larvae, which morph into polyps before becoming free-swimming medusa. Turritopsis isn’t bound by that life cycle. If you skewer a medusa, it can turn back into a polyp. (Credit: Alison Mackey/Discover and Jay Smith)

Ordinarily, jellyfish are born from eggs and grow into larvae, which morph into polyps before becoming free-swimming medusa. Turritopsis isn’t bound by that life cycle. If you skewer a medusa, it can turn back into a polyp. (Credit: Alison Mackey/Discover and Jay Smith)

Arguably, the most unusual case is that of the immortal jellyfish, the Benjamin Buttons of the sea. This simple creature actually ages in reverse, transforming from an adult medusa back into a polyp. Hitting the rewind button is a nifty survival skill that Turritopsis dohrnii put into practice when they sustain an injury or risk starvation. During rejuvenation, certain genes are switched on in specialized skin or nerve cells, causing them to morph back into stem cells. This unique process, known as transdifferentiation, restores the animal’s ability to produce new cell types as it reboots its life cycle, again and again.

The team of ageless marvels includes several other members, though less is known about how they evade senescence. Rougheye rockfish can live 200 years without aging, and their delayed sexual maturation may help with that. A non-aging aquatic salamander, the olm, can reach an estimated upper limit of 100 years, which is triple the lifespan of closely related amphibians, but researchers have failed to find an adequate explanation. Blanding’s turtles survive well into their seventies and Eastern box turtles can live more than a century, both without waning, but how they manage it is largely a mystery.

As these seemingly age-defiant animals advance in years, it’s still possible that some will eventually betray signs of aging. For his part, gerontologist João Pedro de Magalhães at the University of Liverpool is skeptical about some of the claims. He believes all mammals, including naked mole rats and bats, are subject to aging. The onset may simply happen far later in life than in other animals, and with a faster decline. “It would take some strong evidence to prove otherwise,” he says.

Nonetheless, the diverse set of species for which he believes solid data do exist have convinced de Magalhães that “aging is neither universal nor inevitable.” The way forward for many scientists is to draw on these animals’ ingenious tactics to assist humans on their ultimate quest to live long and prosper.