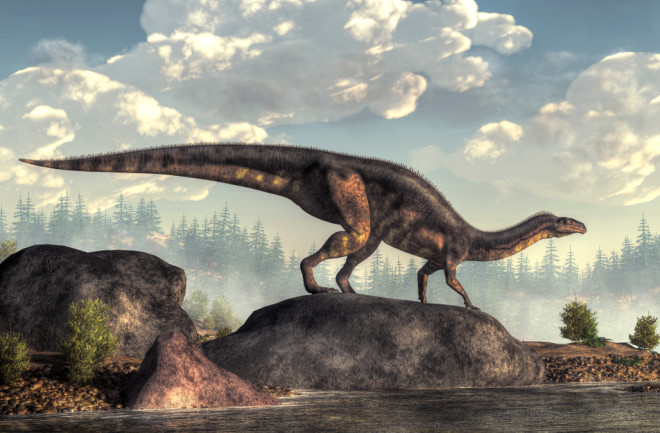 A plateosaurus stands on a large rock on the shore of an ancient lake. (Credit: Daniel Eskridge/Shutterstock)

Positioned between the worst mass extinction of all time and the one that finished off the dinosaurs, the Triassic extinction is, understandably, less notorious. But in its own way it was just as consequential. It’s the event that gave the dinosaurs dominion over the planet in the first place, as tremendous eruptions brought on a wave of climate change that swept away their competitors, not to mention three-fourths of all species.

At the end of the Triassic Period, just over 200 million years ago, the supercontinent Pangaea was breaking apart. In the wake of its dissolution, as Africa and the Americas separated, intense volcanic activity produced the Central Atlantic Magmatic Province, which experts often call by its acronym, CAMP. Paleontologist Paul Olsen describes this 4.3 million square mile lava field from his office at Columbia University’s Lamont-Doherty Earth Observatory. “The rock underneath me is part of the CAMP,” he explains.

Olsen explained it's the largest magmatic province on Earth. "It does look like the biggest part of the extinction happened during the interval of the largest number of eruptions,” he says. Volcanism is a frequent suspect in the “Big Five” mass extinctions of the past 500 million years, of which the Triassic is the fourth. Of course, timing is everything when determining cause and effect — if those eruptions spanned a million years, their impact would be too diluted to trigger a serious extinction. But Olsen and his colleagues have dated the worst of it to a short 40,000-year window, suggesting the finger-pointing is warranted.

The planet had only just recovered from the Permian extinction, or “Great Dying,” 50 million years earlier (the Triassic is the only geological period with the unfortunate distinction of being bookended by mass extinctions). Nevertheless, as the CAMP eruptions spewed huge quantities of carbon dioxide and other gases into the atmosphere, Earth was due for another climate catastrophe.

In the Triassic, the “terrible lizards” weren’t so terrible. They weren’t even widespread. The dinosaurs that would one day reign across the globe were, for the time, relatively small and insignificant creatures, relegated to a few high-latitude regions (though some, like plateosaurus, were large and common). “They’re wandering about on the planet for some 30 million years at least, but never in a dominant role,” says Jessica Whiteside, an associate professor of geochemistry at the University of Southampton.

“If you want a science joke,” she says, “why didn’t the dinosaurs cross the equator?” Because in the tropical regions they couldn’t compete with the pseudosuchians, a diverse group of crocodilian reptiles — some had sails, some were bipedal, one had a domed head and a third, pineal eye atop its skull — that held them at bay throughout the late Triassic. (At the time of story publication, researchers were still investigating better punchlines.)

The pseudosuchians were able to do this partially thanks to the climate, which was incredibly hot even before the CAMP volcanism. Dinosaurs had higher metabolic needs, and because wildfires regularly burned the vegetation around the equator, the thinking goes, there may not have been enough food to sustain them, especially in a contest with more metabolically efficient rivals.

When the extinction struck, however, the tables turned. Suddenly the crocodilians faltered, possibly because they lacked some crucial anatomical features that helped the dinosaurs adapt. With their light bones, insulating feathers, and bird-like lungs that constantly circulated air, they could withstand greater temperature fluctuations. As the crocs disappeared, the lowly dinos rose to fill the vacant ecological niches, Whiteside says. “It’s that story of the meek shall inherit the Earth.”

But what exactly decimated the pseudosuchians? “We have this intuitive idea that you’re going to have this big volcanic eruption, and that’s what kills things,” says Spencer Lucas, curator of paleontology at the New Mexico Museum of Natural History and Science. “If you’re living on the slopes of a volcano, you’re in trouble when it explodes. But what happens if you’re living on the other side of the planet?” Global warming gets you instead.

Those pulses of volcanic activity released enough carbon dioxide to raise the planet’s temperature by many degrees. This increase was exacerbated by the fact that the interior of a continent is far hotter than its coasts — with all the planet’s land combined in Pangaea, there was much more interior than coast. As for marine life, the surge of CO2 likely led to ocean acidification which dissolved calcium carbonate, an ingredient in coral and the shells of many creatures. Warmer temperatures also might have stimulated plankton growth, which is known to flood the oceans with nutrients and often leaves behind oxygen-deprived dead zones.

But CO2 may not have been the only problematic gas the eruptions unleashed. Sulfur dioxide could also have entered the atmosphere, combining with water to form sulfuric acid, an aerosol that blocks sunlight and chills the planet. So it’s possible the extinction’s ferocity came not from warming alone, but from a seesawing climate. “They worked in tandem,” Olsen says. “You’d have these intense volcanic winters that were followed by the extreme heat of global warming.”

Whatever happened, it rid the world of almost all the crocodilians. In the oceans, the extinction almost wiped out a group of shelled molluscs called ammonites, though a few survived and gave rise to modern cephalopods, like squid and octopus. Coral reef communities collapsed around the world as well, and eel-like conodonts went extinct altogether.

The story thus far is the standard, and somewhat simplified, narrative. But as with most extinctions, the Triassic remains mysterious, and some experts question fundamental notions about the event. Lucas, for example, argues it wasn’t a mass extinction at all, in contrast to many of his colleagues.

“We agree on who went extinct, on the significance of the extinctions, on the mechanism,” he says, but “we really disagree about the timing.” Essentially, Lucas argues that the Triassic Period didn’t end in a single, geologically brief cataclysm, which the term “mass extinction” implies. Rather, it ended in a series of minor extinctions spread across millions of years. Researchers conflate those minor extinctions, he says, setting them all at the Triassic-Jurassic boundary when they actually occurred at quite different times. Viewed in this context, the era was more an ecological upheaval than a mass extinction proper.

Many scientists remain unconvinced, though. Olsen (who attended graduate school at Yale University with Lucas in the 1980s) does acknowledge the challenge of “low temporal resolution,” described above. In scholarly literature, extinctions of species are typically classified by “age.” But those ages last millions of years, so it’s difficult to place the extinctions on a timeline with a higher temporal resolution of, say, tens of thousands of years. If 75 percent of the world’s species disappear in 10,000 years, it’s a mass extinction; if they die gradually over the course of 10 million, it isn’t. Under the current system of classification, Lucas has written, “extinctions are artificially concentrated at the boundaries of ages.”

At the end of the day, though, Olsen defends this event as a legitimate mass extinction. If you look over thousands of feet of rock strata above and below it, encompassing tens of millions of years on either side, he says, the end of the Triassic Period is still the single most radical transition from one set of species to another. That turnover is evident at multiple sites in Eastern America, Northern Africa and Europe, he says, and “it’s the biggest thing around.”