How the Transylvanian naked neck chicken got its naked neck 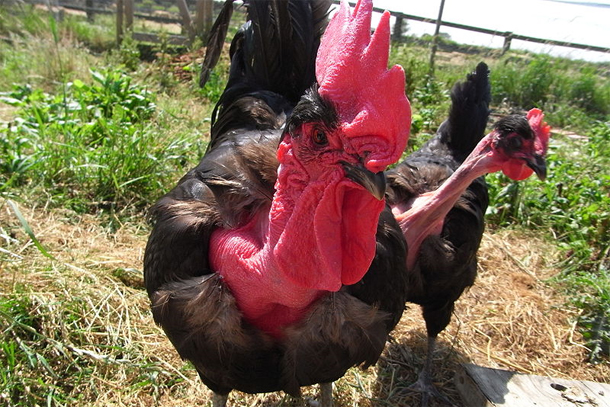 – you can understand how it got its name, and why it used to be called a “turken”. This unusual bird isn’t part-turkey; it’s a genuine chicken, albeit one with an unusual lack of feathers on its neck and sparser plumes on its body. Now, Chunyan Mou from the University of Edinburgh has discovered the single genetic tweak behind the chicken’s unusual appearance. In doing so, she revealed a hidden pattern that lurks in the skin of all birds. The pattern of feathers on a bird’s body is set early on in its life, when it’s still inside the egg. When bird embryos are seven days old, they develop stripes of cells down their body where feathers will eventually grow. Over the next week, the stripes broaden out. As they expand, they lay down rows of cells called placodes, which will eventually produce feathers. Two sets of chemicals – activators and inhibitors – set the pattern of the placodes. The activators promote the growth of feathers (as well as patterns in other animals

), while the inhibitors are feather-blockers. These opposing chemicals can produce many different patterns depending on how they react with one another, the balance between the two, and the speed with which they spread through the skin (see footnote). By tweaking these variables, birds can evolve countless different patterns of feathers. The naked neck chicken provides a great example of how this works. Denis Headon

, who led Mou’s study, had previously shown that the naked neck is caused by a genetic change somewhere on the bird’s third chromosome. Mou narrowed things down to a single gene called BMP12. The naked neck chickens have an extra chunk of DNA some distance away from this gene, which activates it to an unusually strong degree. BMP12 belongs to a group of proteins that act as inhibitors in animal skin pattenrs– they hold back the development of hair, feathers and more. In chickens, BMP12 affects the gaps between the placodes that feathers eventually develop from. If BMP12 levels rise, the placodes are spaced further and further apart, until they’re eliminated entirely. And this is what happens in the Transylvanian chicken’s neck. After all, when Mou blocked BMP12 in the embryonic chicks, they started growing normal neck feathers.

But the mystery wasn’t quite solved. BMP12 is strongly activated all over the chicken’s skin, not just on its neck. Despite that, the birds aren’t completely naked. Indeed, when Mou added extra BMP12 to the bodies of normal chicken embryos, they still only developed naked skin on their necks. This feather-blocking protein doesn’t work on its own. At the larger scale, there’s something about a chicken’s neck that makes it especially sensitive to BMP12. The sensitising force turned out to be retinoic acid, a chemical produced from vitamin A. Mou found that genes involved in producing retinoic acid are strongly activated in the necks of chickens, far more so than on their bodies. This only lasts for a few days, when the birds are still week-old embryos and when feathers start to form. But that’s enough - this temporary boost of retinoic acid gives BMP12 the edge it needs to repress the development of feathers for life. Retinoic acid also switches off the production of feathers but onlyin the presence of BMP12. The two chemicals cooperate with one another, and even low doses of retinoic acid can strongly boost BMP12’s ability to produce naked skin. Feathers only fail to form when both chemicals are present, and that only happens in the necks of the Transylvanian chickens. And to prove the point, Mou managed to restore feathers to the chickens’ necks by using Citral, a chemical that stops the skin from producing retinoic acid. So at a small scale, BMP12 interacts with other chemicals to create regular spaces between placodes. At a larger scale, retinoic acid in the neck tweaks this pattern so it becomes more extreme, and the result is a naked neck. Think of it like painting a canvas – at a small scale, you create effects by varying the width and spacing of your brushstrokes, and at a large scale, you decide which bits of the canvas to cover. Mou thinks that similar genetic tweaks have happened time and again in the evolution of birds. Many groups have lost their neck feathers independently, including vultures, the marabou stork, and large flightless birds like ostriches and emus. Naked necks allow vultures to stuff their heads into carcasses without soiling any feathers; in other cases, a naked neck probably helps its owner to keep cool in hot climates. Whatever the benefit, it seems that it’s particularly easy for birds to evolve a naked neck, rather than another part of their body. After all, Mou found that the necks of embryonic ducks, turkeys, quails and guinea fowl all have much higher levels of retinoic acid than the rest of the body. This pattern would normally be innocuous, completely hidden from natural selection. But it allows BMP-boosting mutations to denude the neck in one fell swoop, while keeping the rest of the body covered in feathers. As Mou writes, “An underlying map within the skin provides a one-step route to a bare neck.” Reference: Mou, Pitel, Gourichon, Vignoles, Tzika, Tato, Yu, Burt, Bed’hom, Tixier-Boichard, Painter & Headon. 2011. Cryptic Patterning of Avian Skin Confers a Developmental Facility for Loss of Neck Feathering. http://dx.doi.org/10.1371/journal.pbio.1001028

Footnote: The system of activators and inhibitors that produces a chicken’s feathers is an example of a “reaction-diffusion mechanism

”. Similar systems determine the patterns of many animals, including hair, stripes, spots and more. They are more complicated than I’ve described here. The activators and inhibitors don’t just counteract one another. The activators produce more of themselves as well as the inhibitors. Alan Turing, the English code-breaker who unravelled these complex patterns, explained this very well using a slightly imperialistic analogy. Turing told a story about cannibals and missionaries living on an island. The cannibals (activators) can produce more of themselves, but they can also be converted to missionaries (inhibitors). The missionaries, being celibate, can only make more missionaries by recruiting cannibals. On a small island, you’d eventually end up with a stable mix of the two. But the people on the island aren’t just standing still. They move about, and the missionaries can do so faster because they have bicycles. This changes things. Cannibals bolster their own numbers through sex, so in the immediate area, their populations grow. Some of these extra cannibals might get converted to missionaries, who would cycle off to further parts of the island. This means that the far reaches of the island become saturated with missionaries, who convert the cannibals there. Close by, cannibals increase their own numbers. Far away, they actually inhibit themselves by producing missionaries. More on reaction-diffusion and animal patterns: Spots plus spots equals maze: how animals create living patterns

More on weird chickens: Every cell in a chicken has its own male or female identity

and In which I set up a collaboration between a biologist, a farmer and a chimeric chicken