Geologic turmoil in the Earth's mantle has kept the Nile's course true for 30 million years. 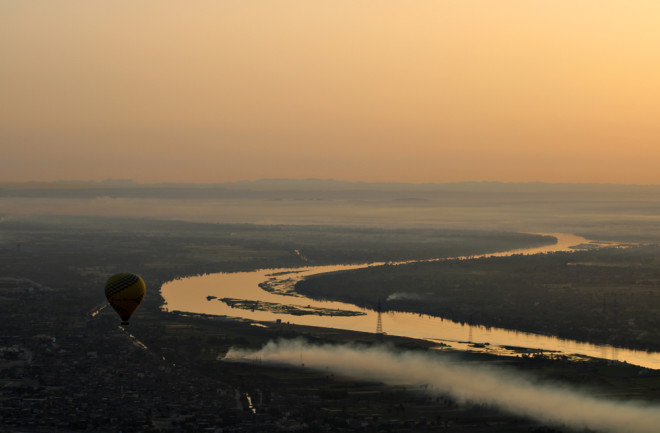 Thousands of years ago, ancient Egyptians built their agricultural systems around the dependable movement of the Nile. Those rhythms date back much further than any human relative has been alive, scientists now find.

New research shows that the Nile has kept about the same course for its entire 30-million-year existence. This is likely thanks to a reliable flow of rocky material just below the Earth’s surface, which continually pushes up the Ethiopian Highlands, where the river starts, says an international team of researchers.

The finding is a peek into how deeper layers of the Earth change our planet’s surface. It also suggests that rivers with similar origins might be due to other, geologic, currents moving beneath our feet, says study coauthor Claudio Faccenna, a geologist with the University of Texas at Austin and Roma Tre University in Italy.

One of the world’s longest rivers, the Nile starts in the Ethiopian Highlands and flows into the Nile delta in Egypt, where the water empties into the Mediterranean Sea. Other researchers have suggested that the Nile might have started carving this path 30 million years ago, but Faccenna and his team wanted to understand the physical mechanisms explaining this ancient and well-worn path.

“Our main interest was to try and understand if mantle convection might leave a sign on the Earth’s surface,” Faccenna says. The mantle, the middle layer of our planet — between the crust and the molten core — is made of rock, but it moves nonetheless (albeit very slowly). Its churns and currents, like the ones that move through the oceans, help create earthquakes and mountains.

Earlier research had already found that unique mineral varieties from millions of years ago showed up in the highlands as well as the delta. This connection helped prove that the two regions are linked geologically, Faccenna says. His research team built a computer model that simulated how the mantle moved in this region all the way back 40 million years ago, during the Cenozoic Era.

The model showed a current within the mantle is pushing up against the Ethiopian Highlands and pulling down and away from the delta, creating a conveyor belt motion. This cycle maintains the slight elevation gradient the Nile needs to keep running from the highlands to the delta, Faccenna says.

Many rivers start at higher elevations created when tectonic plates, or fragments of the Earth’s surface, crash into one another. But the Nile is somewhat unexpected, Faccenna says. There are no plate boundaries near the highlands.

If the gradient needed for the Nile is made by mantle currents, that might explain why other rivers, like the Yenisey in Eurasia, might start in seemingly undisturbed parts of the Earth’s surface. While other research teams dive into those possibilities, there’s more Faccenna would like to learn about the river he’s been focusing on for years. “There’s a whole group of people building up the story” of the Nile, he says. “It’s never finished — this is just one step.”