Thousands of miles of pathways through some of the most rugged land on earth form this six-country UNESCO World Heritage site. 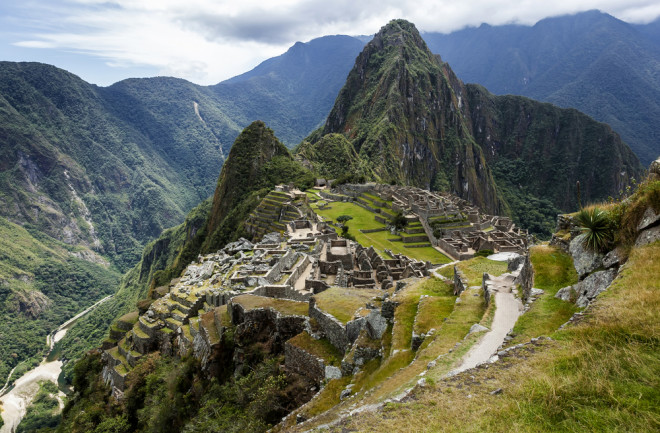 The giant interlocking stones form pathways and staircases over and across some of the most epic landscapes of the world, capturing the imaginations of travelers and dreamers for centuries. Its remains can be found along the coasts, cloud forests and mountains of six countries. Many of these ancient passageways are still used today, both by tourists climbing one of the most popular stretches to the ruins of Machu Picchu near Cusco and by local Andeans who travel lesser-known sections across South America.

The road facilitated message relays, allowing communication between a vast empire that lacked a writing system and practical use of the wheel. Stones from a sacred quarry near Cusco infused the pathway with the divine, and legitimized the rule of the Inca emperors. The fast travel and movement of goods helped rulers organize a complex economy across an area that today includes Colombia, Ecuador, Peru, Bolivia, Chile and Argentina — which lacked a shared monetary system.

“The immensity of it, this planning and the vision, were something not seen anywhere else in the Western Hemisphere until that time,” says Terence D’Altroy, an anthropologist at Columbia University who wrote The Incas, a popular book exploring the people who built and maintained the road.

While people often refer to the Inca Road, the network of trails was much more than a single, contiguous pathway. Rather, it could be compared to the U.S. road system, complete with Interstates, state highways and all manner of local roads or dirt pathways. Together, it represented the spine of the Inca Empire, operating roughly from 1450 to 1532 when the Spanish arrived.

Some parts of the road were referred to as the “Royal Road,” or Qhapaq Ñan in Quechua, the language of the Inca. There were two main veins running roughly parallel to the western coast of South America. The coastal road went from the northwestern border of Peru with Ecuador around Tumbes southward to modern-day Santiago, Chile. This road passed through areas like Nazca, famous for the geoglyphs carved into the landscape and visible from the air, and Pachacamac, an important spiritual center just south of Lima. It’s less well preserved since it wasn’t as formally set even in Inca times. Many stretches were only defined by markings on the relatively flat landscape, according to Giancarlo Marcone Flores, an anthropologist at the University of Engineering and Technology in Peru and author of a book in Spanish about the road system.

The highlands road is the better preserved of the two today and it holds more examples of monumental architecture and engineering. It ran roughly from modern day Colombia down to the modern day Argentine city of Mendoza, including important Inca capitals like Quito, Cuenca and La Paz, with its center sitting at the main capital of the empire in Cusco.

“The standing rule in so far as we can tell is that this was built to facilitate the movement of people on imperial business,” D’Altroy says.

The road’s relay system established stations every 20-25 kilometers which varied in size from small settlements to simpler huts. Runners would jog between these points, delivering messages or goods.

Troops, political administrators and workers on imperial business would have walked the road. The Inca collected taxes in the form of goods like maize and chuño, a type of freeze-dried, “mummified potato that ends up the size of a golf ball,” says Steve Wernke, an anthropologist at Vanderbilt University. These goods were distributed between storehouses around the empire. “That’s really the engine of a lot of the imperial economy,” Wernke says. “The road system is the ligature that ties all of that together.”

Between these two main roads are a number of important perpendicular paths traveling between the highlands and the coast like the Jauja-Pachacamac road, important for delivering highland goods like chuño to the coastal areas and fish and seafood up the mountains.

Perhaps just as important as the road system’s functional use was its symbolic and spiritual significance. The engineering necessary to carve paved paths complete with high walls, canals and bridges in certain areas would have represented a grand statement of power to the subjects of the empire.

The roads passed by spiritual centers like Pachacamac and sacred mountains and volcanoes where human offerings were sometimes made, Matos says. But many of the stones themselves carried spiritual significance. D’Altroy says that the stones were considered a type of fluid form, one they had to ask permission to work into a functional form from spiritual beings: “When the Incas built something they were basically negotiating the ability to do that with beings that were already there."

The Inca drew many of the stones themselves from a sacred quarry near Cusco. Stones from the quarry were “infused with the vitality of Cusco” and used for important projects, and many of the stones lining parts of the road itself came from this quarry. “There was this sense of vitality built into this that went far beyond a simple notion of crossing a landscape,” D’Altroy says.

While the whole system is often referred to today as the Inca Road, a fair amount of the pathways were already in place before the Inca Empire rose to prominence in the 13th century. Both the Wari and Tiwanaku states that preceded the Inca and roughly lasted until the 11th century built their own networks. And some paths came from even older empires or llama caravan routes that likely both preceded and succeeded those empires, according to Nicholas Tripcevich, an archaeologist at the University of California, Berkeley.

Just as the road helped tie the Inca Empire together, it also helped bring about their downfall. Francisco Pizarro and his soldiers used the imperial roads during the conquest. Some of the rope bridges were even strong enough for the Spaniards to cross on horseback at a gallop, D’Altroy says.

“The same structure that enabled Inca imperialism came to aid the Spanish imperials,” Wernke says. The new Spanish Empire proceeded to appropriate much of the Inca Road system for their own uses.

Many of those roads were eventually incorporated into modern-day highways since they often used the most convenient mountain passes. But some old pathways remain as they were, used daily by local people.

Marcone Flores says it’s a problem to separate the idea of the Inca Road from the roads still used today, as the distinction can separate modern-day indigenous people from their cultural heritage.

“There’s an expression ‘Inca yes, Indians no,’” he says. Focusing on past achievements while ignoring the culture of the indigenous people that descended from the Inca is a form of cultural dispossession that goes hand in hand with discrimination.

But indigenous people continue to use and update parts of these roads. One famous example is the Queswachaka, a rope bridge hanging over a river chasm in the southern highlands of Peru. The bridge, which has become a major landmark on the road system, is rebuilt each June and continues to be used by locals and a growing number of tourists.

“The Inca were great technicians and politicians who organized and reorganized the social and natural environment that they found in the Andean territory,” Matos says.