How the Inca Built Machu Picchu

The city’s longevity attests to the craftsmanship and practical prowess of its builders. 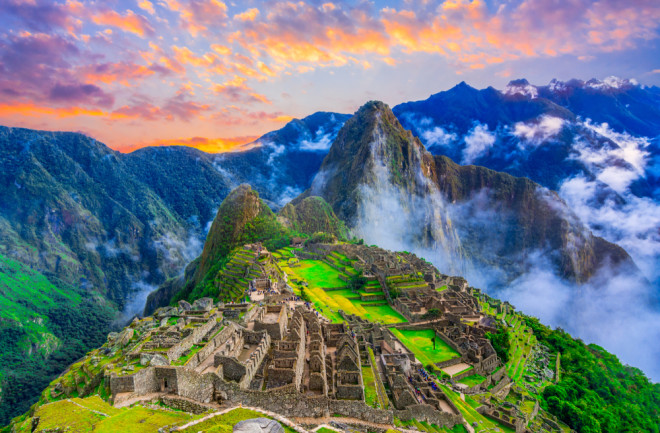 Hiram Bingham, the American explorer who introduced the world to Machu Picchu, reported that “the Inca were good engineers” in 1913. It's no wonder, then, that upwards of a million tourists visit the ruins of this mountain citadel perched among the peaks of southern Peru’s Eastern Cordillera every year to witness the handiwork that inspired his words. A thorough inspection of the site, however, leaves you with the feeling that Bingham’s remark was almost an understatement.

The ancient city — which flourished for just over a hundred years between the mid-15th and mid-16th centuries — is rightly famous for its intricate, masterful stonemasonry. But experts say most of the ingenuity is subtler, often invisible to the untrained eye: drainage infrastructure, slope stabilization, and above all, an overarching vision.

“We’ve scurried around, looked at every hole and every doorway, and the whole thing is beautifully planned,” says Ruth Wright, a historian, travel writer, and environmental activist who formerly served in the Colorado legislature. Ruth and her husband Ken Wright, a civil engineer, have studied Machu Picchu over some two dozen trips. It’s not a haphazard project, she says, but “a completely designed city.”

In light of its location, the achievement is even more impressive. As Ken put it, “they started out with a hostile environment.” The site receives up to 80 inches of rain annually, sits atop steep landslide-prone slopes, and lies upon active fault lines. Despite these obstacles, it has survived more than 500 years of weather and earthquakes and is in remarkable condition. To top it all off, the Inca lacked many of the tools you might think would be necessary for such an undertaking. “They did not have the wheel, they did not have iron or steel, and they did not have written language,” Ken says. “It would seem impossible that they could build something like this.”

Machu Picchu was not an ordinary city, but a royal estate. Constructed at the command of the ruler Pachacuti, who founded the Inca Empire, Ken says it marks “the pinnacle of Inca building.” Naturally, the monarch’s satisfaction was the foremost concern of the engineers, and they designed accordingly.

First, they located the city’s water source, a spring on the north slope of Machu Picchu Mountain — without which there wouldn’t have been a Machu Picchu. They built a stone canal to carry perhaps 26 gallons of water per minute toward the urban center. Where it landed, they built a fountain (which still functions today), then erected the emperor’s residence around it “so he’d have the first crack at the water,” Ken says. “From there on, everything fit together.”

Next door, they placed the Temple of the Sun, a solar observatory and religious center. The focal point of the city, it is also the only structure with curved walls, parts of which sit atop an enormous in situ boulder rather than a traditional foundation. The Inca often built to display and accentuate the natural landscape. “They could take the top off a mountain and it looks better than it did before,” says Vince Lee, an architect who has studied Inca cities for decades on more than 30 trips with his wife, Nancy. Similar to the Temple of the Sun, the walls of the Temple of the Condor rise above two wing-shaped rock outcrops.

The Temple of the Condor. (Credit: lu_sea/Shutterstock)

Besides these critical centerpieces, the walled-in urban sector included another 170 or so buildings. Although the Inca had no written language, the design of these structures seems to be laid out based on a set of rules. For example, the windows are typically the length of a forearm, and the space between them two forearms. “They standardized it,” Ruth says. “You can go into the forest and find a stone building and know it’s Inca because they’re all the same.”

Beyond the city walls, the agricultural sector produced food for the elites and provided work for commoners to pay off their “mita,” a sort of labor tax required of all citizens. The craftsmanship is less refined here, but the engineering is not. In particular, Ruth says, “their use of water was magnificent.” This is true on a purely aesthetic level, with Machu Picchu’s 16 fountains adding a refreshing allure to the area. “As in modern cities,” Ken writes in Machu Picchu: A Civil Engineering Marvel, “the sight and sound of jetting water is an attraction — especially on a hot summer day.”

But more important was their management of the water that, if left unmanaged, would have long since ravaged the site. “The reason that Machu Picchu has stood up over five centuries was because of good drainage,” Ken says. The terraces that line the hillsides below the city, besides adapting the slopes to agriculture, also protected them from runoff and erosion. They came complete with stone retaining walls and carefully layered soil to help water drain into the ground. They even have a high point at the center to prevent rain from collecting.

Back in the urban sector, granite stairways and walkways doubled as a network of runoff channels, all feeding water into a main drain that discharged into the rainforest below the city. Many buildings, especially important ones like the emperor’s residence, had specific drainage plans, which again empty into the main drain. “They were masters at sustainability,” Ruth says.

They had to be if they wanted to build on a precipitous mountain ridge, of course. But the ethic was baked into their worldview. Lee notes that “they cared about the planet,” calling it Pachamama, or Mother Earth. “They had this philosophy that if you’re going to mess with it, you better do it right.”

Much of the Inca's work on Machu Picchu, though impressive, is inconspicuous. Ken has estimated that 60 percent of the construction is underground. But what first strikes the visitor is the exquisite stonework of the city’s most elegant buildings. Without mortar, using a technique called ashlar, the Inca fit finely carved granite stones together with such precision that a piece of paper cannot be inserted between them. Bingham called one side of the Temple of the Sun, a long stretch of perfectly spaced rectangular rocks, “the most beautiful wall in South America.”

Remember that the Inca had no steel or iron tools. These blocks were hewn with bronze and stone, yet with such delicacy that you would never guess. Some recent research suggests they chose the site partially because, thanks to intersecting fault lines, the rocks were already fractured to suit their needs and that made them easier to carve. In other places, however, the Inca built in a polygonal style, in which the sides of the rocks are planar to ensure tight joints. Yet they are not shaped into easily stackable rectangles.

Many stones are not only painstakingly molded, but also massive. The carving was only half the task, and then came transportation and placement. Considering the Inca often handled weights of 10 to 15 tons, it’s no wonder many believe they had alien assistance. But experts have offered more realistic explanations, involving nothing more mysterious than the clever use of levers and ramps.

Read more: How the Inca Road System Tied Together an Empire and Facilitated Its Fall

For the lighter stones, tumbling would suffice. By rolling them end over end, Lee says, “you’re never dealing with the whole weight, only with half.” Heavier ones could be dragged over cobblestone beds, to reduce friction. Or, as Lee has field-tested, they could be placed on sleds and moved up an inclined plane along a ladder-like apparatus, levered from one wrung to the next. Researchers understand less about how they raised and lowered these behemoths into place, but the astonishing fact remains that they did. “They had a limited toolbox,” Lee says, “and they probably knew more about moving giant rocks than we could imagine in our wildest dreams.”

A man wanders through the ruins of Machu Picchu. (Credit: Russell Johnson/Shutterstock)

Equally impressive, apparently, were the roofs that once covered these edifices. All the straw thatching has disappeared, but a few early western visitors documented their sophistication. “If you read the Spanish chronicles,” Lee says, “they were as admiring of the roofs as they were of the stone walls.” One observer, describing a domed roof in a different city, said it was “very reminiscent of the Pantheon at Rome.” Lee has called these “the lost half of Inca architecture.”

Indeed, they are all gone, along with the empire that built them — within a century of its rise, this grand civilization crumbled amid the Spanish invasion of South America. Machu Picchu, on the other hand, still stands. Granted, Lee says, since Bingham arrived a century ago, archaeologists have done some mending. But today it looks almost as though the Inca could move right back in, given new roofs and furnishings. For how many of our modern cities could we say the same? “These guys were just as smart as we are,” Lee says. “They knew what they were doing.”