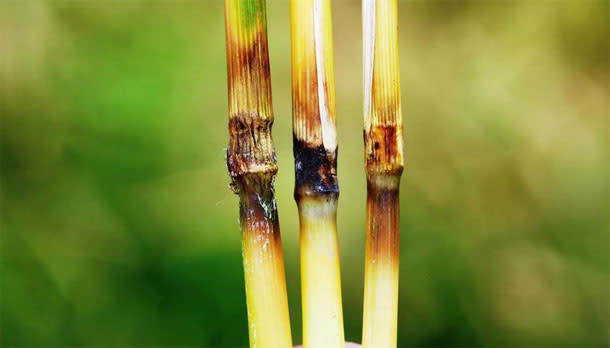 There’s a microscopic fungus that can starve nations and punch through Kevlar. It kills on such as scale that its effects can be seen from space. It’s called Magnaporthe oryzaeand it causes a disease known as rice blast. The fungus doesn’t infect humans, but it does kill rice. It kills a lot of rice, destroying up to 30 per cent of the world’s total crop every year – enough to feed 60 million people. Slowly, scientists have worked out how this cereal killer claims its victims. A rice plant’s woes begin when one of the fungal spores lands on its leaves. As soon as it is surrounded by water, the spore sprouts a dome-shaped structure called the appressorium. This is infection HQ – it’s what the fungus uses to break into the plant. Once inside, it reproduces, eventually causing lesions that kill the leaf. The appressorium produces glycerol as it grows, which lowers the relative amount of water inside the dome, and draws water in from outside. This builds up enormous pressure, around 40 times more than that within a car tyre. That pressure is directed into a narrow ‘penetration peg’ that travels through a pore at the bottom of the dome, and pierces the helpless plant. Nick Talbot from the University of Exeter has spent decades piecing together intricate molecular jig that allows the fungus to create its dome, build its pressure, and enter its host. He was, for example, the one who discovered the role of glycerol, back in 1997. Now, he has solved another mystery: how the appressorium channels its pressure down into its host. The pore at the appressorium’s base provides an opening for the penetration peg but it’s also a weakness. The rest of the dome is surrounded by a sturdy wall to resist the enormous pressure within, but the pore is not. The fungus solves this problem by reinforcing the pore with a ring of actin – a protein that forms long filaments, and acts as an internal skeleton for cells. Talbot’s student Yasin Dagdas saw these rings by using a glowing red marker that recognises actin. Down the microscope, he saw luminous red doughnuts that strengthen the region round the pore and make it more rigid (left panel in image below).

The actin filaments are organised by five proteins called septins, which also form rings around the pore (right panel in image above). The septins are crucially important – when Dagdas got rid of them, the fungus could no longer stab its way into rice. They act as a scaffold for the actin rings, and they anchor those rings to the appressorium’s walls. The septins also act as a fence. They corral other important infection-related proteins, keeping them at the pore where they are needed. These proteins cause the surface of the appressorium to curve outwards, creating a tiny nub that eventually blossoms into a full-blown penetration peg. So, the septin ring not only strengthens the pore, but marks it out as the place where the appressorium’s monstrous pressure will be released. And when that happens, it’s all over for the plant. “It might be possible to target septins,” says Talbot. “They are not present in plants, so they could be good targets for future fungicides or other control strategies.” Reference: Dagdas, Yoshino, Dagdas, Ryder, Bielska, Steinberg & Talbot. 2012. Septin-Mediated Plant Cell Invasion by the Rice Blast Fungus, Magnaporthe oryzae. Science http://dx.doi.org/10.1126/science.1222934Image: top by Donald Groth and bottom by Dagdas et al. More on fungi