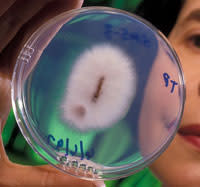 In Robert Louis Stevenson's classic story, Dr Henry Jekyll drinks a mysterious potion that transforms him from an upstanding citizen into the violent, murderous Edward Hyde. We might think that such an easy transformation would be confined to the pages of fiction, but a similar fate regularly befalls a common fungus called Fusarium oxysporum.

A team of scientists led by Li-Jun Ma and Charlotte van der Does have found that the fungus can swap four entire chromosomes form one individual to another. This package is the genetic equivalent of Stevenson's potion. It has everything a humble, Jekyll-like fungus needs to transform from a version that coexists harmlessly with plants into a Hyde-like agent of disease. In this guise, it infects so many plant species so virulently that it has earned the nickname of Agent Green and has been considered for use as a biological weapon. It can even infect humans.

These disease-making chromosomes came to light after Ma and van der Does sequenced the genome of a variety of F.oxysporum called lycopersici (or 'Fol'), which infects tomatoes. Its genome was unexpectedly massive, 44% bigger than its closest relative, the cereal-infecting F.verticillioides. Looking closer, Ma and van der Does found that most of this excess DNA lies within four extra chromosomes, which Fol has and its relative lacks. Together, they make up a quarter of Fol's genome.

Ma and van der Does demonstrated the power of this extraneous quartet by incubating a harmless strain of Fol with one that causes tomato wilt. Just by sharing the same space, the inoffensive strain managed to acquire two of the extra chromosomes found in the virulent one. And, suddenly, it too could infect tomatoes. In a single event, the fungus had been loaded with a mobile armoury and changed into a killer. It seems that the fungus needs just two of the four chromosomes to cause disease; the others probably act as accessories, boosting its new pestilent powers.

The extra chromosomes are loaded with a wide variety of jumping genes, parasitic sequences that can hop into new locations under their own steam. Their presence may explain why the fungus can swap large chunks of genetic material with such apparent ease.

Only a fifth of the DNA in these chromosomes consists of protein-encoding genes, but many of these are known players in the infection game. They produce enzymes that break down the tough cell walls of plants and destroy its tissues. But these weapons are very specific. Other varieties of F.oxysporum, which attack different plants, also have extra chromosomes but theirs are very different to those of Fol. While the core genomes of these varieties are 98% identical, most of Fol's extra sequences have no counterpart in other strains and vice versa.

This incredible genetic variety may explain why this particular fungus is so good at infecting different plants. Each variety is armed with its own unique stash of weapons, tailored to the defences of its particular host. Indeed, when Ma and van der Does incubated the innocuous fungus with varieties that infect melons or bananas, it never gained the ability to infect tomatoes. Only another tomato-killer could bestow those powers.

Where did these four chromosomes come from? Their sequences reveal that they are donations from other species of Fusarium. It's a magnificent example of horizontal gene transfer, where living things undercut the slow passage of genes from parent to offspring and simply trade them between individuals.

These genetic swaps are common in bacteria and they too can change from harmless microbes to deadly killers by trading chunks of DNA called "pathogenicity islands". One such package can convert Staphylococcus aureus from a harmless resident of our skin into the agent behind toxic shock syndrome.

We're becoming increasingly aware of similar genetic exchanges in more complex organisms like plants, fungi andevenanimals, but the transfer of four entire chromosomes - a massive bundle of DNA by anyone's standards - is completely unheard of. These sequences could trigger massive leaps in the evolution of these fungi and their hosts, suddenly triggering epidemics where previously there was harmony.

Random picks from the archive: