How ‘superspreader’ viruses invaded our genes 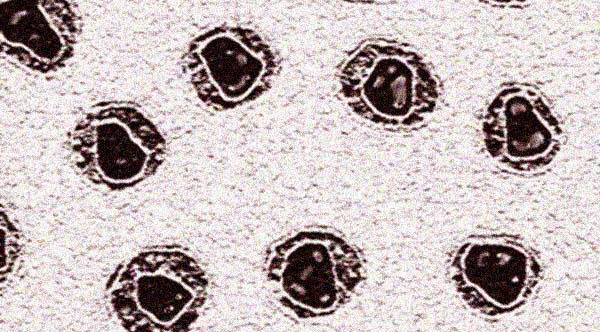 Around 8 to 10 per cent of your DNA comes from viral ancestors. These sequences are the remains of prehistoric viruses that inserted their DNA into the genes of our ancestors, hundreds of millions of years ago. Some of them became permanent residents, and were passed down from parent to child. These endogenous retroviruses, or ERVs, are a legacy of epidemics past. We understand how ERVs got into our DNA in the first place. But why have they been such successful invaders, to the point where they fill around a tenth of our genome? Gkikas Magiorkinis from the University of Oxford has an answer. By comparing the ERVs of 38 mammals, from humans to dolphins, he has found that the critical step in these invasions was the moment when the viruses hung up their coats. Retroviruses, such as HIV, can copy their genetic material by inserting it into the DNA of their host. That way, whenever the host copies its own genes, it also makes more viruses. But to get into a cell in the first place, the viruses need an 'envelope' of proteins, encoded by a gene called env. These act as little keys that allow the virus to penetrate a cell. Without env, retroviruses are stranded. They can copy-and-paste themselves within the genome they’re in (this is called retrotransposition), but they cannot infect anew. But this loss comes with a substantial gain. Magiorkinis found that these stranded viruses become “superspeaders” because the loss of env somehow super-charges their ability to hop around the genome. They may not be able to reach new lands, but they can conquer the one they’re stuck in. Magiorkinis first focused on a single family of ERVs known as IAPs, which invaded the genomes of rodents and other mammals a few million years ago (which makes them relatively young by ERV standards). Some of the IAPs still have env andcan spread to fresh cells, while others have lost the gene and are stuck. By looking at IAPs across 18 species, Magiorkinis found that those that lost their env were also far more abundant. This loss doesn’t just reflect the normal genetic wear-and-tear that happens with time. In many viruses, env broke down even though other viral genes were intact. And this process only goes in one direction. ERVs often lose env and spread like wildlife, but those without the gene never regain it. This trend isn’t restricted to IAPs. Magiorkinis searched for other ERVs among the genomes of 38 mammals, including mice, bats, elephants, and more. Of the many families he found, almost all the most abundant ones had lost or degraded their copies of env. The viruses had repeatedly invaded genomes, lost the ability to spread across them, and become many times better at spreading within them. You can think of the rise of ERVs as an epidemic that’s confined within a single genome, and plays out over millions of years. This isn’t just a cute metaphor. Magiorkinis found that the biggest 20 per cent of the ERV families accounted for 80 per cent of the total sequences. This distribution is remarkably similar to the 20/80 rule in epidemics, where the most infectious 20 per cent of infected individuals account for 80 per cent of transmissions. Why should the loss of a single gene make so much difference? It’s possible that env might harm the health of the virus’s host, either by allowing the virus to infect more cells, or by directly weakening the immune system. By losing the gene, the virus might get a longer-lived carrier, and more chances to be passed on to future generations. Alternatively, spreading within a genome might just be a more efficient way for the virus to copy itself. It doesn’t need adaptations that allow it to survive outside of cells, or avoid defences that target its coat proteins. By hanging up its coat, it might get an easier lifestyle. Whatever the reason, it’s clear that this shift is a successful strategy. ERVs have been found in every mammal genome, and they have been our passengers for millions of years. By losing the ability to infect, they could truly go viral.

Image by PhD DreMore on ERVs