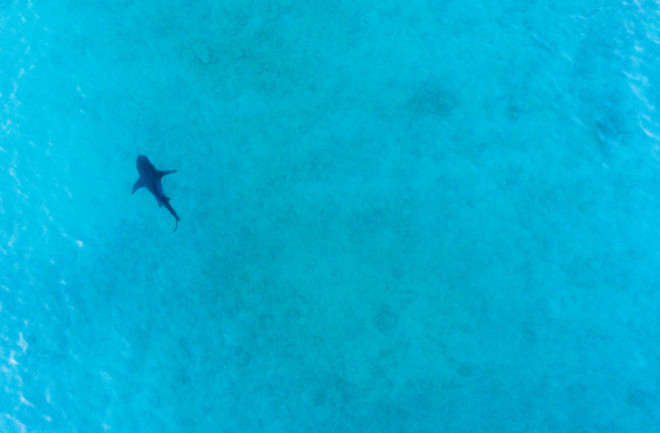 Having been on Earth for more than 400 million years, sharks have learned how to survive natural disasters. Along with hurricanes, tornadoes and volcanic eruptions that ravage our planet today, sharks have also survived the Big Five— the series of mass extinction events that wiped out swathes of animals and plants over millions of years.

The most catastrophic of them all, the Permian-Triassic extinction of 252 million years ago, is named the Great Dying for good reason: It wiped out a staggering 90 percent of marine life and 70 percent of land wildlife, and took 10 million years for the planet to recover.

And yet, sharks remained.

While studying sites that had once been an ocean floor during the Cretaceous period, palaeontologists discovered fossilised teeth of the tiny Cladodontomorph shark, according to research published in 2013. Until this point, researchers believed this shark was a victim of the Great Dying. But they had survived by leaving their natural shallow waters for "deep-sea refuge environments," the study concludes.

Modern sharks still possess this innate instinct. Researchers at the Center for Shark Research (CSR) at Mote Marine Laboratory recorded that all 13 juvenile blacktip sharks left the shallows of their nursery in Terra Ceia Bay, Fla., and disappeared before Tropical Storm Gabrielle arrived in 2001.

Natural disasters have profound effects on the waters they hit. Storms create desalination, or the removal of salts or minerals, as well as anoxia, or the decrease in oxygen levels. Storms also and can churn up the seabed, damage reefs, increase run-off contamination from the shore, and create pollution from washing debris into the sea, or from sunken boats. In addition, disasters can hurt sharks through buffeting from high winds and raised currents.

Evacuation from nearshore areas can mean the difference between life and death for sharks, according to a Florida International University (FIU) study of juvenile bull sharks during Hurricane Irma. They presumed three young sharks were killed from remaining in the shallow waters for too long, probably due to fear of swimming out into open water.

Bull, great hammerhead and nurse sharks also swam to deeper waters during Hurricane Irma, according to another study at the University of Miami. All but two nurse sharks left the shallow waters of the Biscayne Bay for deeper, safer waters to avoid surface chop and lower saline and oxygenation levels. Researchers believe two nurse sharks took refuge under coral ledges.

Getting Ahead of the Disaster

Sharks also know to leave before storms arrive. The "highly directed movement out of the bay, synchronicity of departures, and narrow time frame of the phenomenon indicate this change in behaviour was a response to an environmental cue associated with the storm," according to the CSR in the Journal of Fish Biology.

By accident, the University of Massachusetts Amherst observed nurse, lemon, Caribbean reef and tiger sharks leaving the area of Hurricane Maria two hours before it arrived. The FIU study also recorded three bull sharks leaving a week ahead of the storm.

By uncovering what modern sharks are detecting, researchers could explain how their ancient ancestors survived. The CSR observed the environmental factors of Tropical Storm Gabrielle and found the amount of rainfall, windspeed, tidal level and tidal flow made little difference. In fact, wind speeds were not as high as the area had previously experienced and salinity had not yet declined to levels that were uncomfortable.

Instead, the fall in barometric pressure provides a warning. Sharks can detect this using both the vestibular hair cells in their inner ear, and their sensory organ called the lateral line, according to another study at Aberdeen University. Research has shown that it only takes a pressure decrease of 0.005 bar for sharks to react and respond within 10 seconds of the change.

Sharks also apply early warning systems to living in the vicinity of submarine volcanoes. Rather than barometric pressure, sharks are detecting the Earth’s magnetic field or tectonic movement.

"They might sense vibrations in the water or detect some of the sounds that come before an eruption," Michael Heithaus of FIU explains in Newsweek on how sharks are able to escape impending disasters before they strike.

Some sharks have different responses, though. Not only did tiger sharks in the Bahamas stay for the duration of Hurricane Matthew, but their numbers doubled in the immediate aftermath, according to the University of Miami’s study.

"It was as if they didn’t even flinch," said Neil Hammerschlag a research associate professor and the study’s co-author, in the study summary. He believes the abundance of post-storm casualties enticed sharks to stay. These sharks adapted to the dangers of the storm, and thrived in its aftermath.

While most sharks gradually returned to shallow waters after the end-Permian mass extinction, some species permanently adapted to deeper waters, concludes the Cladodontomorph study.

When studying the extremely active Kavachi volcano near the Solomon Islands, a team of volcanologists recorded scalloped hammerhead and silky sharks happily thriving in the murky orange waters inside the caldera. Kavachi regularly spews out rock fragments and the water is laden with sulphur, carbon dioxide and methane, making it too dangerous for divers to explore. Yet, sharks have adapted to the boiling, toxic waters, and are thriving in the cloudy, hunter-free waters, safe from human contact.

In the apocalyptic world of the Big Five, that same ability to adapt to the darkened, deoxygenated, acidic waters ensured that sharks survived.

Sharks now face their sixth mass extinction event, the Holocene. Human activity will cause this extinction and this time, they will need more than their own instincts to save them. They will need action on our part, or this may be the one they don’t survive.