These giant carnivores roamed Earth long before tyrannosaurs — and held on where those tyrants didn’t reach. 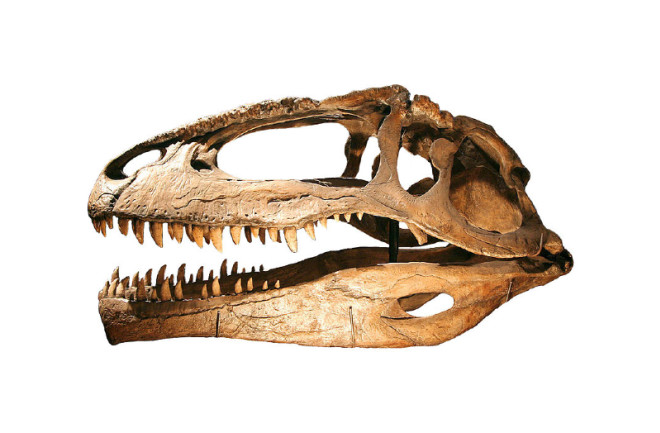 For years, paleontologists and dinosaur aficionados alike have debated what is the largest land-dwelling carnivore of all time. In the one corner, there’s Tyrannosaurus rex, the terror of prehistoric North America. In the other, Giganotosaurus — an equally large dinosaur that stalked ancient Patagonia, and one of the last of an impressive lineage that ruled for tens of millions of years before tyrannosaurs rose to prominence.

To paleontologists, Giganotosaurus and its relatives are classified as carcharodontosaurs. Their name means “shark-toothed lizard,” established by the discovery of Carcharodontosaurus itself in 1931. But even as experts name new species from the U.S., Europe, South America, Africa, and Asia, these momentous meat-eaters can never quite seem to step out of the shadow of tyrannosaurs. That’s a shame. For millions of years, the situation was the other way around.

On the surface, one giant, big-toothed dinosaur might seem the same as another. “If you just glance at a Carcharodontosaurus, you might think it’s a T. rex,” says University of Edinburgh paleontologist Stephen Brusatte. Both walked on two legs, had small arms and were equipped with powerful jaws full of menacing teeth. But, inspected more closely, these carnivores are very different.

The teeth of T. rex, for example, are relatively thick. Brusatte calls them “banana-shaped pegs.” But carcharodontosaurs got their name from teeth that were thinner from side-to-side and came to a sharper point, better for cutting flesh than pulverizing bone. Likewise, notes paleontologist Elena Cuesta, the skulls of carcharodontosaurs don’t have as many air pockets inside — the shark-tooths’ skulls seem to be a little stronger, letting them deliver powerful bites.

Some differences in the neck vertebrae, too, indicate that the shark-toothed hunters had a little more neck agility than T. rex, perhaps using powerful neck muscles to help put extra power behind their chomps. This difference in agility extends to the general build of each dinosaur, too. T. rex is a bulkier, heavier dinosaur that probably wasn’t able to move quite so fast, while carcharodontosaurs have skulls and body proportions that are a little more svelte and less burly.

And while T. rex was a dinosaur suited to deliver bone-crushing bites and totally take apart carcasses, carcharodontosaurs may have been specialists in taking down and tearing apart the long-necked dinosaurs they lived alongside. These different carnivorous habits are on display among animals even today, such as those between spotted hyenas and lions.

Concavenator corcovatus using its hump as a thermoregulatory device, absorbing sunlight in the warmth of a morning sunrise. (Credit: Emily Willoughby/Wikimedia Commons)

Over time, both tyrannosaurs and carcharodontosaurs thrived in the Mesozoic world, but in a back-and-forth dance that played out over time and space. The earliest tyrannosaurs were small, raptorlike animals that evolved around 160 million years ago. They lived under the feet of larger carnivores like Allosaurus, a stand-in for what the ancestors of carcharodontosaurs were like. The shark-toothed dinosaurs, by contrast, continued the trend of their allosaur ancestors and became the dominant carnivores over much of the planet during the Early Cretaceous.

To date, the earliest trace of the carcharodontosaurs comes from southeastern Romania. It’s a tooth estimated to be more than 132 million years old, from the earliest part of the Cretaceous, and had previously been misidentified as that of a different carnivorous dinosaur. The same happened to a more complete find in Inner Mongolia. Paleontologists had uncovered the bones of a large carnivore that had something of an identity crisis — some experts saw it as an allosaur, others as a tyrannosaur, and some thought it was a raptor. But in 2009, Brusatte and colleagues redescribed the fossil as the oldest definitive carcharodontosaur, which they called Shaochilong.

Other finds have stacked up in recent years. Some of these carnivores were absolutely enormous, with Giganotosaurus and Carcharodontosaurus being comparable to Tyrannosaurus in size. Some were smaller but bore bizarre ornaments. Acrocanthosaurus from the U.S., and Concavenator from Spain, bore elevated spines along their backs that supported sail-like structures. No one is quite sure why these ornaments evolved. But one thing is clear: These dinosaurs lived large at a time when the ancestors of T. rex were meek and small, and they may have greatly influenced the history of other carnivores.

“There was nothing inevitable about the rise of tyrannosaurs,” Brusatte says. In fact, it seems that the carcharodontosaurs held them back. Consider some recent finds from the desert of eastern Utah. Paleontologists recently found a human-sized tyrannosaur named Moros from these rocks. At around the same time, there roamed Siats — a carcharodontosaur about the size of a school bus. Here, and in other places around the world, the shark-toothed hunters took over the giant apex predator niche first and kept other hunters out.

“It seems like tyrannosaurs exploded to huge size only after the carcharodontosaurs went extinct, or became much less common,” Brusatte says.

The dominance of the carcharodontosaurs may have also limited the expansion of tyrannosaurs into the Southern Hemisphere. To date, the only evidence of these tyrants below the equator is a questionable fossil from Australia. It may be, Cuesta says, that carcharodontosaurs and other large predators — such as the strange, horned abelisaurids — may have prevented tyrannosaurs from gaining a claw hold. The picture may change with new finds. “The fossil record is annoyingly patchy and incomplete,” Cuesta says, but the current pattern indicates that tyrannosaurs required other large carnivores to get out of the way before they could take over that role between 80 million and 66 million years ago.

Despite their importance to ancient food webs, though, paleontologists are really just getting to know these titanic hunters. They must have hunted and fed in a different way than tyrannosaurs — their skeletons make that clear. But, Brusatte notes, “I’d love to know if carcharodontosaurs really did hunt the colossal titanosaurian sauropods,” or immense long-necked dinosaurs that occupied the same habitats.

Even the large size of these animals raises a mystery: If carcharodontosaurs, tyrannosaurs, and some other theropods maxed out around the 40-foot mark, does this represent some kind of biological limit to how big giant carnivores can be? The story remains in the bones, which tell the tale of some of the most monstrous predators of all time.