Rabbits are often misunderstood. But scientists are unraveling new research about our how our bunny companions were domesticated. 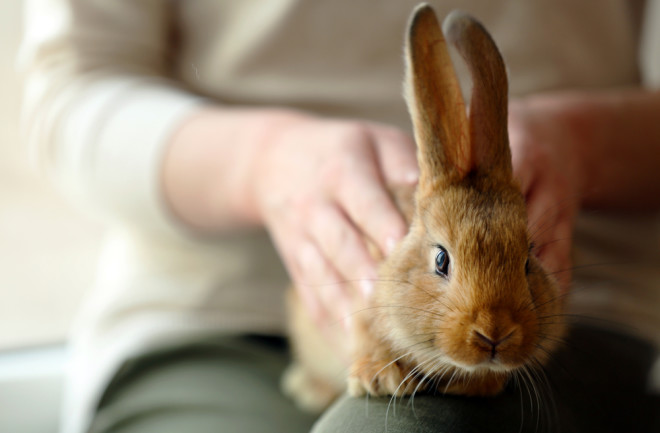 It’s no secret that we love our pets — especially dogs and cats. According to a 2011 poll, more than 90 percent of Americans think of their canine and feline friends as family members. But what about pet rabbits? After dogs and cats, they’re the third most popular pet in the U.S. In 2012, a survey by the American Pet Product Association found that 2.5 million households now share space with domestic rabbits.

Despite their ubiquity, there’s still plenty that may surprise you about the cuddly couch potatoes. For one, when properly cared for, they can live as long as 10 to 12 years. And while their long teeth and affinity for gnawing might make you think they're rodents, rabbits are actually in the order Lagomorpha, which includes rabbits, hares and the lesser-known pikas, small mountain-dwellers found in Africa and North America.

Even beyond these bunny basics, there's lots that veterinarians and scientists are still learning, too. “Science doesn’t know that much about rabbits,” says Dan O’Neill, a veterinary researcher and epidemiologist at the Royal Veterinary College in London. “The world is geared up to do research on dogs and learn about them — and cats, to a lesser degree. With rabbits, it’s really only in the last decade or two that people have started to do much work on them.”

For the most part, my pet rabbit, Amber, likes to lay contentedly flopped on the floor. When someone new walks in, though, she rushes forward to sniff the intruder curiously or just demand pets. But why do domestic rabbits stick around for affection when a person approaches while their wild relatives are more likely to flee in terror? Leif Andersson, an animal geneticist at Sweden's Uppsala University and Texas A&M University, explains that as rabbits were domesticated, humans needed to handle the animals and keep them constrained. In turn, this allowed them to become less agitated around people. “What I’ve learned from people handling wild rabbits is that they have an extremely strong fear response,” he says. “Rabbits are hunted by different cats, minks, eagles, hawks and everything — and humans, of course. So they are really cautious. They run down in their dens when they feel fear.” He points to an observation by Charles Darwin: “No animal is more difficult to tame than the young of the wild rabbit; scarcely any animal is tamer than the young of the tame rabbit.”

In 2014, Andersson and his colleagues published a study examining the genetic basis for rabbits’ domestication. The research team performed whole-genome sequencing of several population samples from wild rabbits in southern France and the Iberian Peninsula, plus samples from multiple breeds of domestic rabbits. They found that the animals adapted through polygenic selection — a process where a population adapts through small variations in genes located at different areas on different chromosomes rather than as the result of a single, fixed change. Beyond that, the study authors theorized that these changes may have actually altered the rabbits’ brain architecture.

In a study published in 2018, the scientists took a closer look to see if these genetic changes had indeed reshaped the bunnies’ brains. Using high-resolution MRI imaging, they scanned the brains of both wild and domestic rabbits to pinpoint differences that could explain their behavior. They found that in the eight pet rabbits they scanned, the amygdala, a part of the brain that processes fear, was 10 percent smaller than in their wild counterparts. At the same time, the medial prefrontal cortex — the area that controls responses to fear — was 11 percent bigger in pet rabbits. The scientists also discovered that the brains of domesticated rabbits have less white matter than their wild relatives, making them less able to process information — and dampening that primal instinct to flee.

Andersson notes that it’s still hard to say whether there’s a direct causal relationship between the animals' different brains and their different personalities. “It’s a correlation,” he adds. “But I would also say that the difference makes a lot of sense. The data is very compelling that we see these reductions in brain regions.”

But if the process of domestication has in fact made wild rabbits more docile, what happens in reverse? Andersson says that if you release pet rabbits into the wild, they’ll start acting more and more like their feral cousins. “They have to survive and keep away from cats and foxes and so-on,” he says. “You could think that they’ll become more cautious, again. One of the projects we’re working on is whether they [actually] revert to wild-type in some of these genes.”

Whether we’re talking about The Big Bang or Superman, we all love a good origin story. When it comes to pet rabbits, the tale goes like this: Around 600 A.D., Pope Gregory the Great issued an edict proclaiming that rabbit fetuses, or laurices, were not considered a form of meat, but fish. Therefore, it was okay for Christians to eat them during Lent. “That provided a significant incentive [to breed rabbits],” says Greger Larson, an evolutionary biologist at the University of Oxford. “Because everybody hated fasting.” So, naturally, monks in Southern France rushed from their monasteries, captured a bunch of wild rabbits and bred them within their walls. Eventually, they grew into the cuddly critters we all know and love.

It’s a satisfying, simple story — one that wraps up rabbit domestication in a tidy bow. There’s just one problem: It might not actually be true. For decades, the tale had been regarded as general knowledge, even commonly cited in scientific papers. “When you hear this story, there are so many elements that are intriguing that you don’t really bother to question its veracity,” says Larson. “I swallowed it, too.”

Since the story suggested that rabbit domestication had a definitive starting point, 600 A.D., Larson wanted to run the animal’s genome through his lab’s molecular clock analysis to independently confirm that date.

So Larson tasked graduate student Evan Irving-Pease with tracking down the papal decree from Pope Gregory. “I didn’t want to just go off hearsay,” he says. “If everybody’s saying it’s true, there must be some kind of basis for it being true.” But when Irving-Pease came back to Laron’s lab three weeks later, he had found no evidence that the story was true — not even a whiff.

In a study published in 2018 in Trends in Ecology & Evolution, Larson, Irving-Pease and their colleagues set out to unravel the hidden history of rabbit domestication. First, Irving-Pease pored over the historical record, tracking down every reference to the story he could find in chronological order. Larson says his student was rewarded with a crisscrossed chain of embellishment and inaccuracy. Two authors in particular, H. Nachtsteim and F.E. Zeuner, bungled their citations regarding a Latin manuscript written by St. Gregory of Tours, a 6th century historian who had nothing to do with Pope Gregory. “They weren’t even closely related,” says Larson. “He did mention fetal rabbits [as a delicacy], but never mentioned anything to do with domestication and certainly didn’t mention anything to do with Lent or monks.” From that one reference, says Larson, the story snowballed until it became accepted as scientific gospel.

In the study, the scientists used other methods to try and tease out the real story. But truth tends to be more complicated than fiction. Archeological evidence told the scientists that people in Spain and France have been dining on rabbits since roughly 10,000 to 20,0000 years ago. Later, during the Middle Ages, they were regarded as a high-status food and transported across Europe. These rabbits were mostly indistinguishable from their wild relatives, since skeletal changes between pet and domestic rabbits didn’t appear until the 18th century. The researchers also looked at present-day genetic analyses of wild and domestic French rabbit populations, but those didn’t reveal crystal-clear answers, either. That data suggested that the animals may have split sometime between 12,000 and 18,000 years ago.

Ultimately, Larson and his colleagues concluded that domestication is a process — not a single event with a fixed marker on a timeline. “As a species, we are just very bad at considering long-term change,” he says. “Stories work because they have a beginning, middle and an end, where you’ve got a direct arrow going through time. When we arrive somewhere, it’s very satisfying. Whereas with anything that takes a long period of time, like speciation or technology change, we’re much more prone to believe stories that end with someone yelling ‘Eureka!’ in a bathtub or getting hit on the head with an apple.” Or, perhaps, with a papal decree and a band of hungry monks.

This belief can have some serious consequences. O’Neill lists some of the top disorders that plague pet rabbits: overgrown nails, overgrown teeth, obesity and ileus, also known as gut stasis, a life-threatening condition where the normal movement of food through the bowels stops working. “Every single one of them is associated with management and husbandry,” he says. “This is the big difference between rabbits and cats and dogs.”

In a 2019 study, O’Neill and colleagues from the Royal Veterinary College looked at the vet records of more than 6,000 pet rabbits in the U.K. The scientists note that, until recently, rabbits have indeed traditionally been treated as children’s pets, kept outside in a hutch and fed a concentrate-based diet. And while those trends are shifting, with recent studies reporting more and more rabbits are owned by adults, issues like improper housing, a lack of companionship and poor diet are still wreaking havoc on their health. For example, the average lifespan among the animals in the study was only around 4 years.

O’Neill notes that the drive to create cuter and cuter pet bunnies can also contribute to health issues. “The more we breed to improve rabbits, the worse we’re making their health,” he says. “And when I say improve, I mean bigger eyes and flatter faces and loppy ears. The more we do that, the less healthy they are.”

Yet there’s still plenty that current — and prospective — bunny owners can do to treat their rabbits right. Even before making the decision to get a rabbit, O’Neill suggests considering who’s going to care for the new pet. Once you’ve decided, he continues, try to find a rabbit that looks as close to their wild relatives as possible. “Try to fight your urge to buy what you think is cute,” he says. In addition, since rabbits are social creatures, you might want to get a second one as a companion.

“This is a whole process that you walk people through,” he adds. “You have to imagine life with this rabbit.”