How Our Sleeping Habits Helped to Make Us Human

Efficient slumber may be a hallmark of humanity. 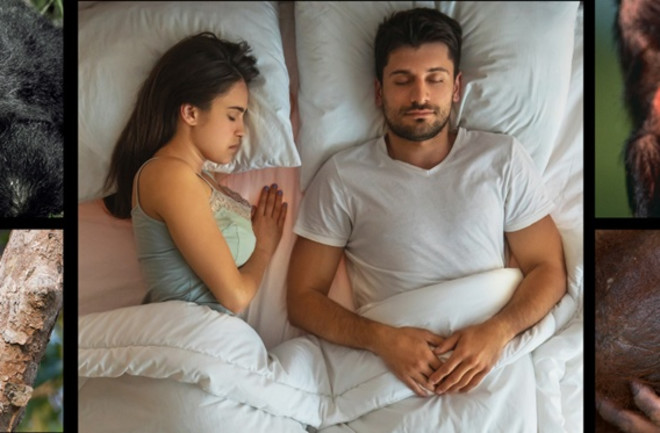 Our evolutionary success is usually attributed to our ancestors’ flashiest achievements: upright walking, control of fire, tool use and social cooperation.

“Sleep isn’t generally listed,” says David Samson, an anthropologist at the University of Toronto, Mississauga. “But my bias is it should be ... because it is expressed so uniquely in humans.”

Roughly 8 million years ago in Africa, hominins — the evolutionary branch that includes humans and our extinct ancestors — diverged from other primates. Since that split, hominins evolved distinctive sleep habits still with us today.

First off, we sleep less. While humans average seven hours, other primates range from just under nine hours (blue-eyed black lemurs) to 17 (owl monkeys). Chimps, our closest living evolutionary relatives, average about nine and a half hours. And although humans doze for less time, a greater proportion is rapid eye movement sleep (REM), the deepest phase, when vivid dreams unfold.

These differences were first noticed in the 1960s, when scientists recorded monkey sleep phases using electroencephalogram (EEG) machines. But only recently have anthropologists begun to consider the role of sleep in human evolution. “Which is kind of wild to me because it’s something we spend a third of our lives doing,” Samson says.

Thanks to a surge of new research, Samson and his colleagues are finding that our unique sleep habits may have been as essential to hominins’ success as walking on two feet — even though scientists aren’t sure why we sleep at all.

Most primates, like these rhesus macaque monkeys, sleep in trees to avoid predators. Our ancestors may have evolved a shorter, more efficient sleep pattern to stay safe on the ground. Florian Möllers/naturepl.com

Some animals do sleep with one or two eyes open, but others tend to go for the full shut-eye. Within that state, they cycle through degrees of consciousness. During non-REM stages, heart rate and breathing slow, muscles relax and awareness of external stimuli fades. Brain activity settles into comalike, low-frequency electrical waves, detectable by EEG. Next comes REM sleep, characterized by quick brain waves and dreams.

The deepest stage of REM “is as dead to the world as you’ll ever be. You’re pretty much out for the count, and you’re not taking stock of what’s going on in your environment,” says Samson.

While the costs of sleep are obvious — an animal is vulnerable to predators and other threats, and loses opportunities to find food and mates — the benefits are not. Different hypotheses about why we need sleep include neural development and upkeep, memory processing and immune defense, but there’s no consensus.

Sleep habits also differ drastically among species. Elephants get by with two hours of shut-eye, while armadillos need 20. Researchers have found several factors that influence these variations in sleep patterns. For example, animals with high metabolisms sleep less — presumably because they spend more time awake and eating. And animals with bigger brains spend a greater portion of sleep in REM.

As a result, different species need different amounts of sleep based on their diets, brain size and other variables: An armadillo-hour does not equal an elephant-hour when it comes to catching Zs.

In a 2018 study in the American Journal of Physical Anthropology, Samson and colleague Charles Nunn, an anthropologist at Duke University, employed a sophisticated statistical method to compare the sleep patterns found in 30 primate species, including our own. They found, says Samson, that humans are significant “evolutionary outliers.” We sleep less but spend about 10 percent more of our total sleep time in REM than expected. Human sleep is shorter and deeper — in other words, more efficient — than that of our closest relatives.

The finding supports a hypothesis proposed by the duo in 2015: Efficient sleep gave our hominin ancestors an evolutionary edge. By shortening total duration, hominins reduced their time as unconscious targets for predators, and added waking hours to complete essential tasks, like learning, securing resources and maintaining social bonds.

It’s also still unknown when our ancestors evolved this unusual sleep pattern. Samson speculates it may have emerged when they became too large to sleep in trees, roughly 2 million years ago with Homo erectus. While other apes avoid predators by building arboreal nests, it’s possible that hominins sleeping on the ground evolved more efficient sleep to allow them to spend more time awake — and on the alert for potential threats.

A single bout of nightly sleep, now typical in industrialized societies, is a relatively recent adaptation. Historians and anthropologists alike have documented non-industrialized cultures past and present where two or more bouts of sleep in a 24-hour period are the norm. Alison Mackey/Discover

Based on nearly 70 studies across cultures, including those without electricity or 9-to-5 workdays, Samson and Nunn determined that humans sleep an average of seven hours out of every 24. But, says Samson, “where it gets tricky is that when you look across cultures, the way those seven hours are expressed can be pretty flexible.”

In contemporary industrialized societies, people typically sleep for one continuous bout. But other cultures divide sleep over multiple sessions, through daytime napping or two nighttime episodes, separated by about an hour of wakefulness.

The latter was the norm for humans before the Industrial Revolution, according to research by historian Roger Ekirch. In preindustrial documents, Ekirch identified over a thousand mentions of so-called first and second sleep, and activities done between, such as chores, prayers, even visiting neighbors. Found in newspapers, court records, diaries and literature, from Homer’s Odyssey to Leo Tolstoy’s War and Peace, the references permeate more than 2,000 years of recorded culture.

The habit of segmented sleep was shed by the early 1900s, likely due to artificial lighting and changing societal views that equated single-bout sleep with productivity and prosperity. Yet Ekirch believes it persists, among Westerners who spontaneously wake in the middle of the night, “a persistent echo of a pattern of sleep ... dominant for literally thousands of years.”

Within any culture, people also prefer to rest and rise at different times: In most populations, individuals range from night owls to morning larks in a near bell curve distribution. Where someone falls along this continuum often depends on sex (women tend to rise earlier) and age (young adults tend to be night owls, while children and older adults typically go to bed before the wee hours).

Genes matter, too. Recent studies have identified about a dozen genetic variations that predict sleep habits, some of which are located in genes known to influence circadian rhythms.

While this variation can cause conflict today — between, say, late-rising teens and early bird parents — it may be the vestige of a crucial adaptation. According to the sentinel hypothesis, staggered sleep evolved to ensure that there was always some portion of a group awake and able to detect threats.

First proposed in 1966 by psychologist Frederick Snyder, the idea has gained some recent support. In a 2017 study in Proceedings of the Royal Society B, Samson gave activity trackers, which can approximate sleep time, to a community of Hadza hunter-gatherers in Tanzania. Over 20 nights, there were only 18 one-minute periods when everyone was asleep. Most of the time, about 40 percent of the group was active.

The study “suggested there’s some type of mechanism set in place where there’s individuals alert, protecting everyone, while most everyone is asleep,” says Samson. This could explain how our ancestors avoided danger while enjoying deep, REM-packed sleep.

It also fits the idea that the pattern emerged around 2 million years ago, when ancestors like H. erectus abandoned the safety of trees for a fully terrestrial life. Efficient, sentinel-style sleep may have then spurred advances in brain power, technology and social cooperation seen in later hominins.

While logical, the hypothesis must remain untested. As Samson puts it, “We’ll never have a Homo erectus to hook up to an EEG.”