There are lots of ways to determine an age for rocks and minerals. So, just how old is the oldest stuff we've been able to date? 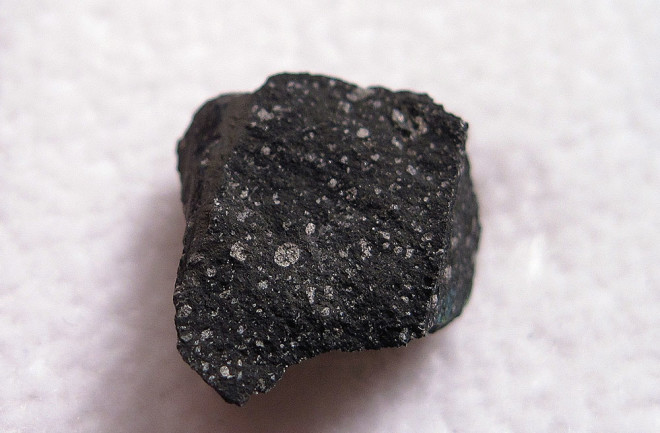 A fragment of the Murchinson meteorite that fell in Australia in 1969. Credit: Wikimedia Commons.

The Earth is old. Real old. Sometimes it is hard to truly grasp just how old it is compared to human lifespans, but if we say time represented in a century is the same as the length of a football field (100 yards or 91 meters), then all of Earth's history would get us to the Moon and back over five times! So, when Earth scientists talk about the oldest stuff on the planet or in the solar system, they're talking about rocks and minerals that reach that far back (or more) into Earth's past.

When we talk about the age of the Earth, we're really thinking about the age of the solar system as well. The Earth formed from the spinning cloud of dust and gas that formed our Sun and all the solid debris around it. If we want to know how old the planet is, we need to think about what we would date (usually using radioactive elements and their decay) to get us back that far.

How Old Is the Earth?

One idea might be the Earth's oldest rocks. A good guess, but a tricky one because Earth's surface is so dynamic. The processes of plate tectonics have altered and recycled the Earth so much over its history that the oldest-known whole rock on the surface gets us to 4.28 billion years. That is really far back, but these rocks in Canada don't get us all the way back to where it all began.

The dates for these Canadian rocks are somewhat controversial, but there are a number other rocks that are around 4 billion years old. Rocks on the Moon likely formed not long after the Earth during a massive collision with another early solar system object, and date back to around 4.4 to 4.5 billion years ago.

So what about individual minerals? A whole package of rocks might not survive all the trials and tribulations of plate tectonics, but minerals that get recycled into younger rocks (especially sedimentary rocks) might preserve something even older than the Canadian rocks.

The quartz conglomerate from the Jack Hills in Australia. Zircon from this rock are the oldest crystals on Earth. Credit: Wikimedia Commons.

These minerals end up being zircon, one of the most resilient and persistent minerals on the planet. They are also chock full of uranium, so they can be accurately dated. The Jack Hills zircon, named after the low hills in western Australia where they are found, date as far back as nearly 4.375 billion years ago.

Space Rocks Are Even Older

But can we push it even further back? We might not have the record on the Earth, but certain meteorites are likely remnants of the first solid stuff to form from the solar nebula. The Allende meteorite that fell in Mexico in 1969 has been dated to 4.567 billion years ago. It is a type of meteorite called a carbonaceous chondrite, just the sort of primeval material we think formed during the start of our solar system.

So, Allende gives us a good age for the Earth, or at least the first materials that began to coalesce to form the planet. Getting at the timing of how long we went from debris in the nebula to a proper planet is still being actively researched, but studies looking at extinct isotopes (elements whose decay rate means they don't exist in our solar system anymore) suggest that it might have only taken a few tens of millions of years — pretty short compared to the age of the solar system.

What about stuff that might be even older than that? A recent study from the Proceedings of the National Academy of Sciences looked at dust particles in a meteorite that fell in Australia in 1969. This Murchinson meteorite takes us back even before the solar system may have formed.

Looking at how isotopes of certain elements like neon formed on this dust, this new work by Philipp Heck and others determine that the dust in the Murchinson meteorite might be up to 3.9 billion years older than our solar system. That makes them potentially 7 billion years old! This dust is the remnants of other stars that pre-date our sun, but they are some of the first evidence of the material that was around our neck of the galaxy long before the sun started to shine.

How far back can we conceivably get? This is a question without an answer at this time. Astronomers, looking at stars in other galaxies to peer back into the history of the universe, suggest that our galaxy is around 13.6 billion years old. This isn't the same kind of date as Earth scientists have collected — there is no solid material that we're examining and measuring. However, it does leave the window open for the discovery of stuff even older than the 7 billion-year-old dust of the Murchinson meteorite.