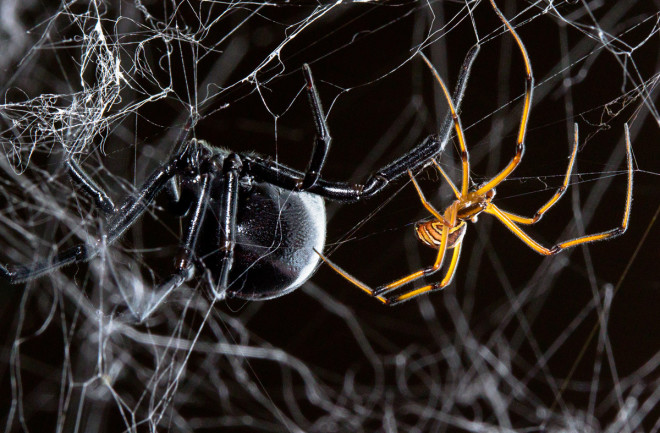 Along the coastal sand dunes of Vancouver Island, British Columbia, seduction on the log-strewn beaches can be dangerous. A male can end up as lunch instead of lover if he doesn’t read a female’s signals correctly.

A male western black widow spider, that is.

Catherine Scott has spent the past several summers trying to untangle the nuances of courtship communication in these spiders, which are found across much of western North America. A doctoral student at the University of Toronto, she works in the laboratory of behavioral ecologist Maydianne Andrade, who has spent decades studying these spiders and their relatives. Now, Scott’s work is revealing some of the secrets of spider sex.

Dating on the Web

The black widow female is a sit-and-wait predator that builds a messy-stranded cobweb as a trap for crawling and flying insects. She stays on this web until she’s fully mature. Then she reaches out for company.

Like so many 21st-century humans looking for love, a female black widow in the mood puts a want ad on the web. She’ll perfume her web’s silk with pheromones, chemicals that attract the attention of males within smelling distance. This scent stimulates the males’ built-in GPS, which allows them to home in on her web.

A mad dash to the advertising female ensues. Up to 21 males may show up within a few hours, though around seven is more typical, explains Scott. A female’s pheromone scent “provides information to males — at a distance — like whether she’s mated before, and whether or not she’s hungry,” says Scott. Clues about a female’s hunger are critical because in this species, the risk of males being cannibalized by females is, contrary to popular belief, highest not after sex, but before.

Once on a lady widow’s web, males cautiously communicate not only through their own chemical signals, but through dance moves. In research published in 2014, Scott’s colleague Samantha Vibert figured out that a male’s slow “whisper dance,” in which he vibrates the web’s strings, is a careful demonstration to his poorly sighted potential mate that “I’m here, but I’m not a prey.”

Without that communication, “if a male enters the web of a hungry female, he might get eaten before he ever gets a chance to mate,” says Scott.

And the dangers of a male’s mating quest extend beyond hungry partners. “Lots of things eat spiders,” says Scott, including birds, wasps, ants and other spiders. Exactly what eats them at her field site on the Pacific coast is unclear — it’s rare to witness actual predation — but more than 80 percent die during their searches for females.

Besides not wanting to be eaten, males have another incentive to traverse risky terrain as fast as they can, vying for first place in the beach race: If he’s the first to mate with a female, he can block off her reproductive tract, thus thwarting mating attempts by rivals.

A male black widow will use pedipalps, odd sperm-transfer organs, to mate with a female. He finds his lady’s web via the pheromones she emits. (Credit: Sean McCann)

Understanding how this works requires some spider sex ed. “Black widow spider genitalia are ridiculous and amazing,” says Scott, referring to a male’s bizarre sperm transfer organs. Unconnected to his gonads, these two “pedipalps” stick out like bulbous boxing gloves in front of his face. When ready to mate, he deposits his sperm-containing fluid onto a special web, then uses his pedipalps to suck it up. Both sexes have pedipalps, but only the male’s function like turkey basters.

If a female consents and copulation occurs, the pedipalp’s corkscrew-shaped tip breaks off inside her reproductive tract, forming a plug. Placed well, that plug prevents additional males from mating with her.

Males can pull another sneaky stunt that could stack the paternity odds in their favor. After arriving at a female’s web (provided she doesn’t eat him), males begin cutting out pieces, bundling them up with their own silk. Until recently, it wasn’t clear why they did this.

Scott designed an experiment, which appeared in Animal Behaviour in 2015, to see what these males were up to. At Island View Beach and Cordova Spit, where the Tsawout First Nation allows Scott land access for her work, every square yard of driftwood-covered sand hosts two to three adult females. There, Scott and her colleagues set up cages along the beach to test how males would respond to intact versus altered webs.

Some cages had no webs in them at all. These were the controls, to see how many males would randomly stumble across them. In the rest of the cages, the researchers allowed females to build webs, then removed the spiders.

The researchers left some of these caged webs untouched. They placed males inside others, and gave them an hour to make alterations before taking them back out. In still others, the researchers snipped the webs themselves, with scissors. After all the different cages were set up on the beach, the ecologists counted how many wild males living nearby showed up in sticky traps beside each treatment.

Scott found the intact and human-snipped webs were equally attractive to males. But the webs that male spiders had altered attracted significantly fewer rivals — a third as many as the other webs. This suggests that this odd dismantling and bundling behavior seems to reduce how attractive a female’s web is to the competition.

Not all widow spider scientists think these radical web renovations constitute sabotage, though. Yael Lubin, a professor emeritus at Ben-Gurion University of the Negev in Israel, has a different take. “I regard [web reduction] as part of the courtship behavior, but the function is still under discussion,” she says.

Scott also suspects that vandalism is not the only purpose of this web cutting and bundling. It’s likely part of the overall chemical conversation, she says, noting that males have sex pheromones, too.

The Tools of Seduction

While the function of the male-female web interplay is still debated, the potency of female pheromones is unquestioned. Lubin, who has studied spiders since the 1970s, observed in Middle Eastern desert widow spiders something Scott and others have seen in their black widows, too: One of the pheromones females apply to their web is so powerful that, upon touching it, males often initiate a full courtship display even when their prospective partner isn’t there.

It’s been tricky for biologists to figure out which specific compounds make up the black widow pheromones so they can tap into those chemical conversations. It was only through some innovation and some guessing, that Scott, working with a Simon Fraser University team, figured out one influential chemical in the pheromone cocktail.

Since some of the pheromones of the redback spider, a cousin to the black widow, were already known, the researchers wondered if the species would have any pheromones in common. They found that one compound in particular might overlap between the two.

A female western black widow, marked in light blue by researchers, is courted by an unmarked male. (Credit: Sean McCann)

In a test, they presented male western black widows with the compound found on the silk of both species to see if it elicited a response. It worked — the spiders responded almost as strongly to the redback compound as they did to silk from females of their own species. This compound was the first ingredient of the pheromone cocktail discovered: a chemical called N-3-methylbutanoyl-O-methylpropanoyl-L-serine methyl ester, or MB-MP-S. They published their work in the Journal of Chemical Ecology in 2015.

Knowing the chemical recipe for western black widow pheromones may have practical applications. Occasionally, western black widow spiders end up in vineyards, alarming workers or consumers who reach in for a grape and get a black widow surprise. Once known, the secrets of spider sexual chemistry could be used to lure the unwelcome critters into a trap for removal.

Scott continues to be fascinated by exactly what, why and how western black widows communicate on and off their webs, navigating what she calls a “sensory storm” of information to find one another. It’s just one part of the tangled black widow mysteries she’s still trying to unravel.

Lesley Evans Ogden is a freelance journalist in Vancouver, British Columbia. Follow her on Twitter: @ljevanso. This story originally appeared in print as "Sex on the Beach."