How Nature Can Preserve a Brain for Hundreds of Years 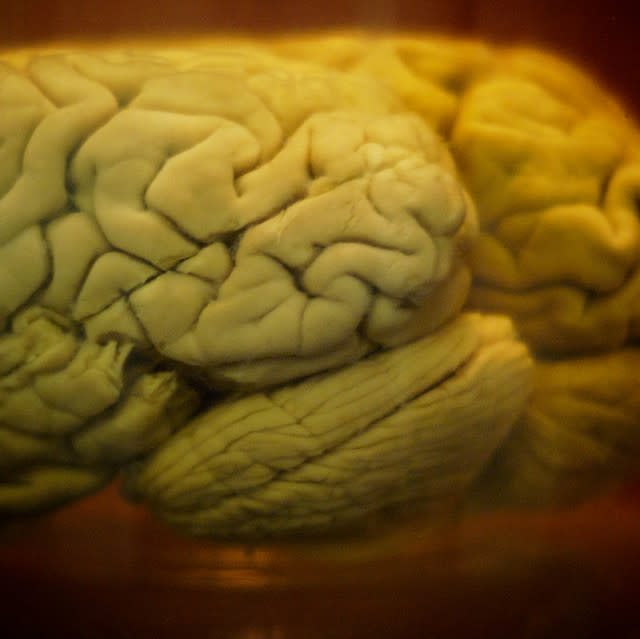 Brain tissue is very soft and full of water, and through autolysis it usually begins to decompose rapidly after death. Nevertheless, it can sometimes be preserved. In 1998, archaeologists excavated the fossilized remains of an 18-month-old infant from a burial site near Quimper in France. The child had died about 700 years previously, and its body was found wrapped in leather and placed in a wooden coffin with a pillow under its head. The skull had a large fracture, suggesting a brain hemorrhage as the probable cause of death – and still contained the shriveled remnants of the left-brain hemisphere. The brain tissue had lost about 80 percent of its original volume but was otherwise extremely well preserved. The frontal, temporal and parietal lobes retained their original shape, and other brain structures, such as the characteristic grooves and ridges of the cerebral cortex, were visible to the naked eye. Furthermore, the researchers could easily distinguish between grey and white matter in CT and MRI brain scans. Microscopic examination of the tissue revealed that it even contained intact cells. Last year, a team of Russian researchers reported another remarkable find – the partial carcass of a 39,000-year-old woolly mammoth, excavated from permafrost in the Sakha Republic, Russia, complete with a well-preserved brain.

Such finds are extremely rare because brain tissue is only preserved when human or animal remains are buried in very specific environmental conditions. The child’s skeletonized remains were found in an area containing both fresh and salt water, and their continuous immersion in water – combined with the absence of oxygen – is probably why the brain was so well preserved. Conditions like this favor the formation of adipocere (which is sometimes called "grave wax" or "mortuary wax") through a process known as saponification. Adipocere is a soapy, wax-like substance formed when anaerobic bacteria break down a person’s body fat. It consists mostly of saturated fatty acids, and its formation produces a firm and very stable cast of the soft tissues that would otherwise undergo putrefaction.

If conditions are right, adipocere formation begins between two weeks and two months after death – and it can sometimes help crime scene investigators to determine the cause of death. Several years ago, the body of a middle-aged woman was found wrapped in a plastic bag and dumped in a shallow pond in the Gokulpuri area of Delhi. The woman’s remains had been submerged for about three months, because of a concrete block tied to the neck with cable wire, and her body was badly decomposed. Because it had been left submerged in water during the rainy season, however, adipose had formed all over it. This had preserved the woman’s fatal injury: a large cut in her throat was still visible, and this, investigators concluded, is what killed her. In another case, lumps of adipocere formed inside the gunshot wounds of a murder victim. Investigators recovered a bullet from one of the lumps and identified the murder weapon from it, leading to a confession from the culprit.

This article originally appeared at Mosaic.