How Monarchs Migrate Without a Map

A clock in the antennae and a "sun compass" in the brain help guide these butterflies on their 2,000-mile trek to Mexico. 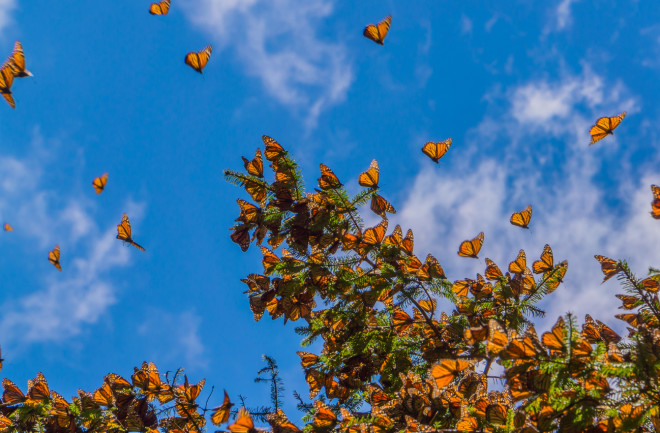 Right about now, millions of monarch butterflies are transforming the forests of Michoacán, Mexico into a swirling sea of orange and black. As temperatures dip, they’ll limit their movements and eventually settle into large, dense clusters to wait out the winter. They deserve the rest. After all, each butterfly started out somewhere in the northern U.S. or Canada and traveled as far as 3,000 miles to reach this temperate home away from home.

Even more impressively, the monarchs embark on this annual migration without a GPS to guide them — or even an old-fashioned map. And they can’t ask their parents for the best route; because of their short lifespans, only about one out of every five generations of monarchs migrate. It’s no wonder they’re the only butterfly species known to make a two-way migration, just as birds do.

Unfortunately, climate change and deforestation are now raising concerns about the potential loss of this unique phenomenon. According to a recent report from the Mexican government and the World Wildlife Fund, the amount of forest occupied by hibernating monarchs in Mexico has been on a steady decline for decades. It dwindled from nearly 15 acres in the winter of 2018 to seven acres the following winter. Last year, the butterflies occupied only about five acres.

All of this begs the question: How do they find their way during the arduous trek? Scientists have been hard at work unraveling the internal navigation techniques that help guide these incredible insects. And the more we understand about how monarchs make their annual migration south, the more we might uncover about the numerous hurdles they face along the way.

As one might expect, the Sun plays a pretty big role in navigation — both for humans and monarchs. But the Sun is a moving target, and its position in the sky doesn’t mean a whole lot unless you also know the time of day. Whereas we’ve developed useful tools like wristwatches and cell phones to do just this, monarch butterflies must keep track of time using other means.

Read more: Animals Can Find Their Way Home, But We Aren’t Sure Exactly How

Researchers recently discovered that most monarchs take to the skies when the Sun is about 57 degrees above the horizon, regardless of whether they're flying out of Winnipeg, Canada, or Lawrence, Kansas. The team further determined that there's a window of opportunity for flight (when the noon Sun is between 57° and 48°), according to their study published in Frontiers in Ecology and Evolution in 2019.

Scientists had long assumed a mysterious internal clock was ticking somewhere in the monarchs’ brains, alongside the rest of their navigational circuitry. But that theory was debunked in 2009 when a team of neurobiologists at the University of Massachusetts Chan Medical School discovered it in another part of the insect's body: the antennae.

In their study, the researchers clipped off the antennae of Mexico-bound monarchs and were surprised when they lost their way in a flight simulator — a large cylindrical vessel with a bar stretched across the top, from which the butterflies were tethered. Rather than flying toward the south, they each flew in an utterly random (yet still steady) direction. The researchers repeated the experiment, this time painting the insects’ antennae to block any sunlight rather than clipping them off, and saw similar results. Their internal clocks were still ticking, but they were misaligned because they hadn’t been reset by the Sun. If you’ve ever forgotten to shift your clocks in accordance with daylight savings, you have a rough sense of what that feels like.

“This is the first evidence that antennal clocks could directly regulate a brain function," lead author Steven Reppert told Nature in 2009. It was also a clue that the butterfly’s migratory ability is more complex than originally thought — visual information sent from the insect's eyes, along with information sent from its antennal clock, enable its brain to act as a time-compensated "sun compass." In this way, monarchs cleverly integrate the time of day with the Sun's position on the horizon to navigate their way in the world.

As it turns out, that time-compensated sun compass isn’t always functional. According to a team of researchers led by Jerome Beetz and Basil el Jundi from the Biocentre at Julius-Maximilians-Universität Würzburg in Germany, it’s only established at the moment the butterfly begins flying. In a study published last month, the researchers tethered monarchs to a flight simulator and mimicked the location of the Sun with a green spot of light. During flight, they monitored the monarchs’ brain activity with ultra-fine microelectrodes; previous studies like this had only been done on restrained butterflies.

“Surprisingly, the nerve cells change their coding strategy during flight, so that the neural network represents the heading direction of the butterflies relative to the Sun in a similar way to a compass,” Beetz said in a recent press release. “This only happens when the animals can control their own direction of flight." Until now, it was assumed that the sun compass was always at work, regardless of whether the insects were at rest, walking or flying.

“Our publication uniquely demonstrates that even a brain with the size of a grain of rice is a highly complex organ that enables insects to perform such amazing behaviors,” Beetz said. “Such a long-distance migration without using modern navigation devices is hard to imagine for us humans and this is one major reason that drives my fascination for these enigmatic butterflies.”

Alana Wilcox, a conservation biologist who studied monarchs at the University of Guelph in Canada, shares this fascination. Earlier this year, she and her colleagues published research that indicates the development of a sun compass isn't dependent on how the butterflies have been raised. Rather, it's built into their nature. According to their study, even butterflies raised entirely in a laboratory setting can find their way south when released in the wild.

To test this, the researchers equipped a group of lab-reared monarchs (the offspring of wild-caught parents) with tiny radio transmitters, released them into the wild and tracked them using an array of over 100 automated telemetry towers. “It was great to see the monarchs fly with the transmitters attached, but I was filled with even more anticipation waiting for the data to be returned,” Wilcox says. That data showed that all but one of the 29 reliably detected butterflies flew in the expected south to southeast direction from their release sites and were detected at distances of up to 125 miles away.

It also showed that monarchs raised in captivity are able to survive being released into the wild. Previous research warned that captive-reared monarchs have lower migratory success than their wild counterparts — but Wilcox disagrees. Although being held in captivity may temporarily disorient the butterflies, she says, they likely reestablish their navigation systems after being exposed to environmental clues like natural sunlight.

That's good news for hobbyists and educators across North America, thousands of whom collect monarch eggs or caterpillars from the wild to raise indoors each year. It's become an increasingly popular activity, in fact, and can have numerous benefits: Although it likely does little to directly supplement wild populations, it arguably goes a long way toward raising awareness of monarch conservation efforts.