How Many Words Can Dogs Learn?

Depending on the canine in question, some can learn many — others very few. 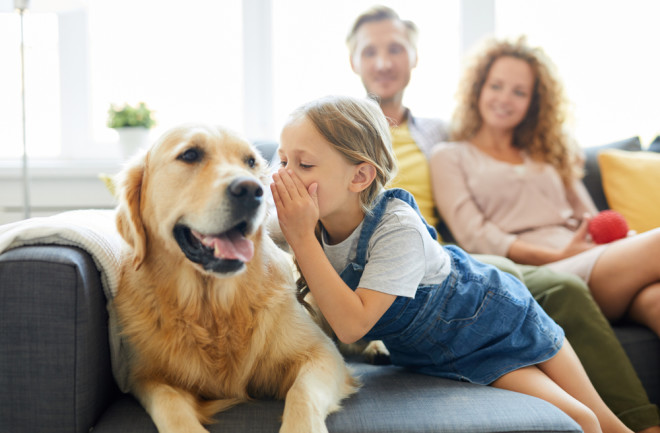 Dogs can apparently understand enough of the English language to have full-on conversations with their owners. At least, that appears to be the case on TikTok and Instagram, where dogs can be seen “talking” by tapping buttons that sound out particular words. Most of the words selected by these internet-famous canines tend to be something a dog might want or need such as “thirsty,” “hungry” or “toilet.”

But some interactions appear more profound than simple requests. Take Bunny, for example. She’s a sheepadoodle — a cross between an old English sheepdog and a poodle — with over a million followers on Instagram. This breed is recognized as particularly intelligent, but Bunny seems to have reached a whole other level: Her repertoire of buttons includes more advanced concepts like “different,” “happy” and “stranger.”

In some videos, she seems to tell her owner that she loves her. In others, they discuss whether Bunny enjoyed a new kind of food that her owner gave her for dinner that night. Heart-warming stuff, sure, but do these clips indicate that Bunny can actually hold a sophisticated conversation?

“You can easily teach a dog to ring a bell if he needs to go out and do his business or for food or for play. That I don’t doubt,” says Claudia Fugazza, a dog trainer who studies the animals’ cognitive abilities at Eötvös Loránd University in Hungary. “But when it comes to the more complicated stuff, I think humans are just good at making sense of whatever it is the dogs end up pressing.”

In reality, dogs may just press buttons at random because every time they do, they receive some sort of attention from their owner (which is what most pups desire).

While genuine chats are unlikely between us and our canine friends, that doesn’t mean dogs are necessarily clueless. Some exceptionally gifted dogs can easily learn the names of new objects, as Fugazza has shown in her own research. She has verified the word-learning capacity of six “knowledgeable” dogs whose owners said they knew the names of at least 15 of their own toys.

Fugazza tested the dogs by introducing them to new toys and playing with them. During the play, the owner says the name of the new toy four times. The same was then repeated with another new toy. “After just hearing the names of the two objects just four times each, it’s enough for them to tell the difference between the new toys,” she says. But there’s a caveat: the memory fades just as quickly as it was created. “After just ten minutes, they forget,” says Fugazza. “So, we thought they must need more exposure for longer term memory.”

That’s why Fugazza and her colleagues then conducted a follow-up study. This time they looked at more intensive exposures over a period of five months. “The dogs trained every day with their owners and once a week with a dog trainer. Then we tested them once a month,” she says. “They could learn multiple new toys. It was impressive.”

In another subsequent study, the researchers had the dogs learn new toy names in a similarly involved way and then put the toys in a box for one month — during this period, the dogs couldn’t see or play with them anymore. Later, they tested the dogs to see if their memories had held up. “They could still remember, it was enough to consolidate the memory of the toy names,” Fugazza says.

Comparable experiments with regular dogs, however, did not yield significant results, which suggests that this kind of word recognition may be unique to a select few dogs.

So if you feel you have an intelligent dog who enjoys playing with things, then they might be able to learn the names of those objects. But as far as conversational buttons go, if you’re looking to use them for interactions with your dog beyond “I need to pee” or “please feed me,” then you’re likely to be left disappointed.