How Life Got Complicated

In China's Guizhou Province, a thin band of rock crowded with fossils smaller than poppy seeds may reveal the origin of all the animals that ever lived. 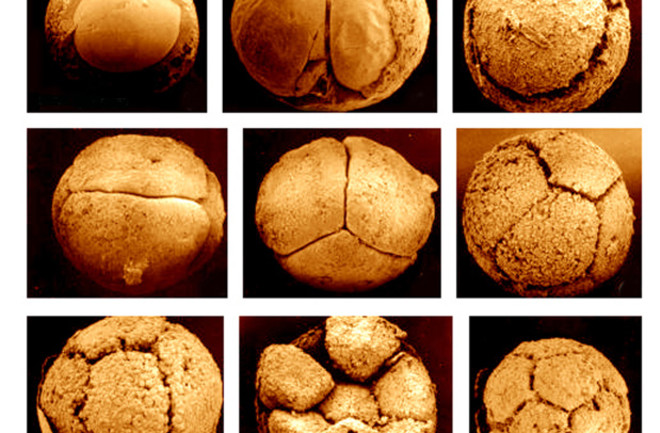 For decades the Chinese mined a phosphorus-rich layer of rock that winds through the hillsides of Guizhou Province and used it to make fertilizer for rice paddies. Then, in the 1980s, several geologists noticed fossils embedded in that layer, which they called the Doushantuo Formation. Viewed under a microscope, the fossils were exquisite—spherical and segmented on their surface, like a blackberry. Most people believed they were ancient algae.

Entranced by the forms, a paleontology student named Shuhai Xiao brought several hundred pounds of the rock to Harvard while working on his Ph.D. there in the 1990s. He noticed that the fossils, though all the same size, consisted of different numbers of cells: one, two, four, eight, and so on, up to around 1,000, roughly doubling with each increase. Xiao knew that it was unusual for a mature organism to stay the same size while undergoing successive rounds of cell division. Animal embryos, however, do so regularly. Xiao compared the fossils with modern embryos and concluded that he was looking not at algae but at something far more breathtaking: embryos of some of the first animals on Earth.

Xiao’s discovery illuminated a long-standing mystery. All major groups of animals—an entire kingdom of multicellular life that today includes insects, worms, shellfish, starfish, sea anemones, coral, jellyfish, and vertebrates like us—bloomed suddenly in the fossil record during an evolutionary extravaganza known as the Cambrian explosion, which occurred 530 million years ago. But genetic studies of modern animals had suggested that all of these creatures evolved from a single-celled ancestor that lived at least 100 million years before that, leaving a huge gap between the estimated origin of animals and the appearance of the earliest known animal fossils. Xiao’s embryos helped fill that gap.

One Mystery Leads to Another The fossils also raised new questions. Why had adult specimens of the creatures never been discovered? And was it valid to compare decayed, fossilized tissue with living embryos? Philip Donoghue, a colleague of Xiao’s at the University of Bristol in England, worried that the comparison might be misleading, since decay can affect the structure of organic remains. In 2005 he decided to find out whether modern embryos decay into something resembling what Xiao had found. He took brine shrimp embryos, asphyxiated them, and watched for 18 months as they broke down in tubes of seawater. The results looked exactly like the Doushantuo fossils. “That told us the animal embryo hypothesis was a good one,” Donoghue says.

But the fossils’ identity was not settled yet. A few years later, in 2011, Donoghue’s postdoc John Cunningham inadvertently raised new questions about them. One day Cunningham subjected a Doushantuo fossil to X-ray tomography ?(a 3-D scan) and obtained a beautiful image of its interior. This particular fossil was slightly different from most of the others, peanut-shaped instead of spherical. People had seen such oddly shaped fossils before and assumed they were embryos that been crushed before fossilizing. But Cunningham was stunned by what the X-ray revealed. On its inside the fossil wasn’t crushed at all. It was magnificently preserved, just like Xiao’s embryos—but instead of fewer than 1,000 cells, it contained half a million. In one stroke, this peanut-shaped fossil overturned Donoghue’s thinking. Despite the encouraging brine shrimp studies, he conjectured, the Doushantuo fossils weren’t embryos after all.

In an embryo, Donoghue explains, you’d expect tissues, even organs, to develop by the time you have that many cells.” But the numerous cells in the peanut-shaped fossil were not differentiated into organs; they all looked alike. Donoghue now believes the fossils represent a more primitive ancestor of animals. To him they resemble spore sacs formed by modern single-celled organisms called mesomycetozoeans, which sit between animals and fungi on the tree of life. Mesomycetozoeans reproduce by multiplying inside a sac that eventually ruptures, releasing thousands of individuals. If the Doushantuo fossils are more like spore sacs than like animal embryos, that would explain why no adult animal fossils have turned up.

Did a Sac of Spores Launch the Animal Kingdom Xiao, now at Virginia Tech, stands by his original interpretation. He still believes the spheres he studied in 1993 are the embryos of early animals and argues that the peanut-shaped fossils represent a different, unrelated organism. There may be some truth to both men’s viewpoints: The first animals may well have looked more like a sac of mesomycetozoeans than like any modern multicellular creature.

Regardless of how the Doushantuo fossils end up being classified, Donoghue’s observation about their similarity to mesomycetozoeans may tell a lot about ancient animal evolution. The genomes of several mesomycetozoeans have been sequenced, with surprising results. These single-celled organisms possess genes once thought to be a unique evolutionary invention of animals. Some of the genes control receptors called integrins, which help cells attach to and communicate with one another, allowing formation of specialized organs and complex body plans. Iñaki Ruiz-Trillo, a biologist at the Institute for Biological Evolution in Barcelona, believes that in these simpler organisms, integrin genes may contribute to the formation of spore sacs.

What is emerging from this work is a fascinating possible scenario for the humble beginnings of the mighty animal kingdom: A few thousand spore cells in the ocean, poised to scatter like dandelion seeds, may have decided to stick together and continue their experiment in group living for a little while longer. If so, insects, starfish, and even humans may owe their existence to a dust-size spore sac that wouldn’t explode.

Douglas Fox is a freelance science writer based in California. His work is featured in The Best American Science Writing 2012.