Since the first living things appeared on the planet, the biggest among them have become increasingly bigger. Over 3.6 billion years of evolution, life's maximum size has shot up by 16 orders of magnitude - about 10 quadrillion times - from single cells to the massive sequoias of today (below right). And no matter what people say, size does matter. 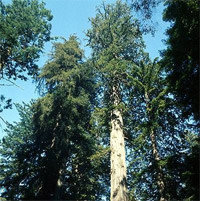 The largest of creatures, from the blue whale to the sauropod dinosaurs, are powerful captors of the imagination, but they are big draws for scientists too. Jonathan Payne from Stamford University is one of them, and together with a large team, he ambitiously set out to understand how the maximum size of living things has evolved throughout the entire history of life on Earth.

Taking each geological era and period in turn, the team scoured the literature for examples of the largest species alive at the time and recorded their size by volume. They also interviewed experts in the field of classification to get their side of the story. Payne's full database is available online and it showed that the massive increase in life's maximum size wasn't a gradual process.

Instead, it happened in two main bursts, which took place in just 20% of the history of life but accounted for 75% of the increase in maximum size. On both occasions, the largest living things became about a million times larger. The first followed the evolution of more complex, compartmentalised cells and the second came after the advent of multi-celled creatures, and both coincided with dramatically rising levels of oxygen in the air. It was a case of environmental changes unlocking pre-existing evolutionary potential. 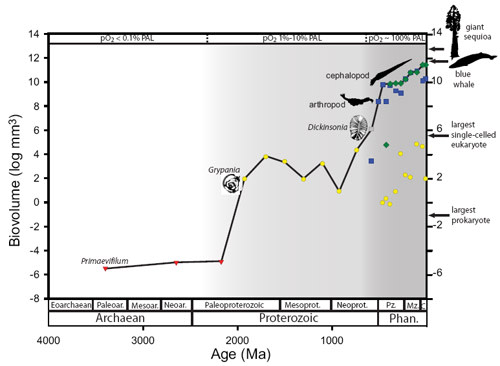 The first jump took place about 1.9 billion years ago, when the first eukaryotic cells came on the scene. Today, these cells make up the bodies of animals, plants and fungi. They all have a nucleus that contain their DNA, along with many other compartments with their own specific functions. It's this internal complexity that sets the eukaryotes apart from prokaryotic cells like bacteria, which lack a nucleus and other such compartments. With its internal division of labour, the eukaryotic cell doesn't have to rely on simple diffusion to carry nutrients into and around its borders, and can therefore afford to be much larger than those following the prokaryotic blueprint.

During this great leap for cell-kind, maximum size shot up by a million times, but stayed pretty much constant for about a billion years. The next big innovation in size happened place between 600 and 450 million years ago, during the Ediacaran, Cambrian and Ordovician Periods. Within a very short span of time, geologically speaking, life on Earth went through an explosion of diversity that saw single-celled species eclipsed by substantially larger multi-celled creatures.

In the 450 million years since the Ordovician, relatively little has happened in the size department. Compared to the largest orthocone, the mighty blue whale is only about 30 times larger and the superlative giant sequoia, the largest living individual organism, is a thousand times larger.

There will obviously be controversies over any analysis of this scope, but Payne is well aware of them. For example, much of the data to support the first jump in size comes from set of thin, tube-shaped fossils called Grypania spiralis, each just over a centimetre long. Its identity has been hotly debated - some think that the fossils are colonies of bacteria (prokaryotes), but others believe them to be among the earliest known eukaryotes.

Payne believes that the evidence weighs in on the second theory - the fossils are regular in both shape and size and bear signs of an complex internal structure. And even if Grypania was actually a conglomerate of bacteria, there are other large fossilised eukaryotic cells; excluding Grypania would just shift the date of the first size jump forward in time by a few hundred million years.

Payne also asserts that his database is an accurate reflection of the fossil record and of history itself. For a start, the task of finding the largest species in history was helped by the fact that palaeontologists are an excitable bunch and get even more excited when they discover an unusually large fossil. The upshot is that the names of unusually large fossil species tend to bear Latin or Greek roots that mean "large", "giant" and so on.

Even if the largest species just haven't been found yet (or indeed, if the fossils that have been found were unusually small individuals for their species), it's unlikely that the final result would be greatly affected. The jumps in size that Payne is considering are huge and as he says, "It's unlikely that dinosaurs, whales or cephalopods 10 times the size of the largest known specimens have ever existed."

Payne also considers, and rules out, the possibility that the second size jump is only apparent because later larger animals were better preserved than earlier ones. For a start, the size of fossil tracks and other signs of animal life generally match the size of the fossils themselves. Also, some groups of early animals, like the bizarre anomalocarids, are only very rarely well-preserved but even they have left behind the odd large-bodied remnants.

All you need is oxygen

It's clear that increases in complexity - from prokaryote to eukaryote, and from single cell to many cells - allowed life to become much bigger. But they weren't necessarily responsible.  Certainly, there seemed to be delays between the big innovations and the size increases they enabled - the first multi-celled fossil eukaryote dates back to 600 million years before the Ediacaran size explosion. Why the gap?

Payne's data can't tell us, but he thinks that it's no coincidence that both size jumps coincide very closely with periods in Earth's history when the concentration of oxygen in the air skyrocketed, from less than a thousandth of modern levels to about 1-10%, and then again to the current standard.

It's a sensible theory - rising oxygen concentrations and body sizes have been linked before and scientists have suggested that increasingly oxygenated atmospheres were triggers for both the origin of eukaryotes, and explosion of animal diversity during the Cambrian Period. Eukaryotes need oxygen to respire and complex multi-celled eukaryotes like the largest animals and plants have an even greater demand for it.

Payne thinks that early species had structural innovations that gave them the potential to get bigger, but increasingly plentiful oxygen was the shot that started the race to become truly enormous. It was the trigger that allowed early life to fulfil the evolutionary potential it already had.

The SciencesWhat Gives Your Favorite Whiskey Its Unique Flavor?
Recommendations From Our Store