For millions of years, these spotted cats have collected and scarred bones. Now we’re learning to read those remnants and see how they reframe early human civilization. 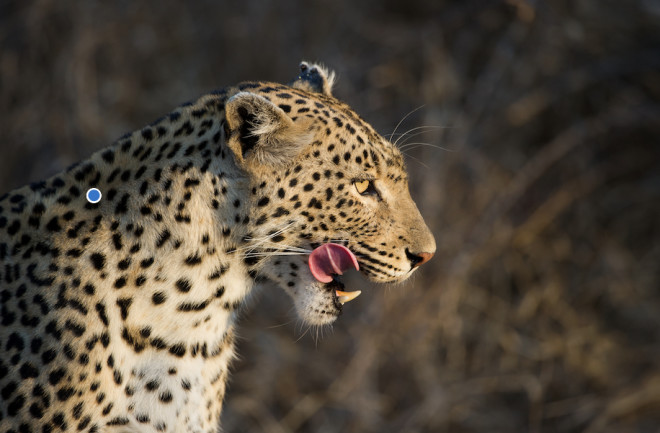 The teenager probably didn’t see it coming. One moment, they were carrying on with life as usual in South Africa circa 1.8 million years ago. The next, blinding pain, a crunch, and then darkness — dead at the paws of one of prehistory’s greatest carnivores.

We know the story because of a single fossil, uncovered and collected by Robert Broom and J.T. Robinson at a fossil-filled cave called Swartkrans. The specimen, SK-54, is nothing more than a skull roof from an early human Paranthropus — an evolutionary cousin who was characterized by deep jaws and broad teeth. What makes the fossil special, and horrific, are two punctures in the skull.

The holes line up with the conical lower canines of a leopard. The longer upper canines of the cat’s maw likely stabbed through the hominin’s forehead or eyes — perhaps as the leopard carried its dinner to the recesses of the cave.

A leopard jaw and teeth from 1.5 million years ago differ somewhat from today, but these killer tools helped create the fossil record. (Credit: Javier Trueba/MSF/Science Source)

SK-54’s fate likely wasn’t unique. Leopards have acted as bone collectors for millions of years, helping to create the fossil record. This might seem strange for a cat. Large or small, cats can be categorized as hypercarnivores — they primarily eat meat, and often focus on soft parts like muscle and viscera. Saber-toothed cats were once thought to take these dining preferences to the extreme, avoiding bone to preserve their gleaming canine teeth.

But some cats aren’t as averse to bones as previously thought, and these dining habits have proven to be a benefit to paleontologists. Big cats can leave their marks on bones while feasting on flesh. And thank goodness they do — through bite marks and broken bones, leopards have left a trail of fossilized “breadcrumbs” for paleontologists to follow.

What those shards, fragments and collections of bones meant, however, has been a matter of changing interpretation. The discovery of Australopithecus, Paranthropus and other human fossils in South Africa during the first half of the 20th century fascinated anthropologists such as Raymond Dart and Robert Broom. Even more intriguing, many of these bones showed signs of deliberate damage. What happened to these people? Early theories, buttressed by the horrific memory of World War I and the destruction of World War II, suggested these early humans were rapacious murderers.

“The narrative that emerged from those discoveries of Australopithecus in the early to mid-20th century was the hominins were carnivorous, violent, bloodthirsty and even cannibalistic creatures,” says Smithsonian National Museum of Natural History (NMNH) paleoanthropologist Briana Pobiner. In fact, Dart proposed that these early humans had an “osteodontokeratic” culture with tools and weapons made of bone, teeth and horns, explaining the lack of chipped stone tools in the caves.

As Dart wrote in the article “The Predatory Transition from Ape to Man” in 1953, “the blood-bespattered, slaughter-gutted archives of human history” was apparent, from early records of humanity through the atrocities of World War II. We’d been violent from the beginning, Dart believed, with our “bloodlust” and “predaceous habit” making us deadlier than any lion or hyena.

In this view, the australopithecines turned on each other and made the most of the fresh meat, perhaps during some disputes or when there weren’t enough herbivores like antelope to hunt. Other early human sites, such as Beijing’s Dragon Bone Hill in China, were interpreted in similar ways — damaged hominin bones seen as signs of habitual cannibalism.

As anthropologists and archaeologists went back to the fossil record, however, the idea that early humans were predisposed to violence and cannibalism faded away. By the 1980s, the next generation of experts grew skeptical of the “blood-bespattered” history Dart laid out. Anthropologists such as C.K. “Bob” Brain went back to the caves with an eye toward taphonomy — an emerging field of study concerned with how fossils become fossils, or, as practitioners often summarize it, “what happens between death and discovery.” Brain and others didn’t find evidence of early humans bashing each other. Instead, “they recognized that the patterns of bone breakage that were presumed to be created by hominins were the same as bone breakage patterns created by non-human predators,” says Pobiner. And among the culprits were leopards.

Modern leopards are often thought of as ghosts of the savanna — and sometimes cities — that stealthily ambush prey. “Leopards are solitary, drag their kills into trees to avoid competition with terrestrial-bound predators like lions and hyenas, and tend to leave the kills unguarded for long periods of time and come back to eat from them periodically,” Pobiner says. Some leopards may have done this in trees near or above cave openings. Sometimes, they may have used the caves themselves.

“The image of leopards perching high in the trees to protect [kills] from their competitors is very typical,” says Víctor Sauqué, a paleontologist at Spain’s University of Zaragoza. But observations of living leopards indicate that the recesses of a cave can suit the cats as well as an elevated branch. When the cats make themselves at home, leopards leave signs of their presence both through what they eat and how they eat it.

While it’s true that leopards and other big cats don’t include as much bone in their diet as wolves and hyenas, says University of California, Berkeley, paleontologist Jack Tseng, the cats are more skilled at disassembling skeletons than we give them credit for. Big cats can easily break and consume thin bones like toes or the ends of ribs, especially when there’s competition. When leopards face a competing carnivore taking over their hard-won meal, Tseng says, “leopards would be motivated to consume their prey more rapidly, thereby increasing the chance of consuming smaller pieces of bone that they can chew off during a frantic bite.” This would leave a literal mark in the fossil record.

In Racó del Duc Cave in Spain, for example, Sauqué and colleagues explored a collection of bones made by a leopard during the Ice Age. The patterns of damage on the ancient bones tell a story. Leopards usually don’t leave as many toothmarks on bones as other bone-accumulating carnivores, such as prehistoric hyenas. (In fact, recent research has proposed that giant hyenas — rather than cannibalistic Homo erectus — were responsible for the carnage found at Dragon Bone Hill.) Sauqué also says that “when leopards do leave marks on the bones, they usually do so on the cervical vertebrae, which is where they catch prey.” Sometimes the bones of the cats themselves turn up, too, if the location served as a den or place to shelter offspring from other deadly jaws and claws.

In the case of Racó del Duc, the only prey found in the cave was a species of horned ungulate called an ibex. But each cave inhabited by leopards has its own unique collection of feline table scraps. Sites like Swartkrans show that humans were on the menu, too. Each puncture and scratch on bone documents an ecosystem both strange and familiar. The sly, messy or even distressed habits of leopards and other carnivores left a record we would have otherwise missed. Tseng says the diversity and number of carnivores roaming the prehistoric landscape may have also created more pressure for animals to find hideaways to eat. “Such behavior serendipitously provides bone accumulation for paleontologists to find and learn about prehistoric predators and their local ecological community at the same time,” he says.

Paleontologists are still learning to read the bones left behind. While poring over the bone collection at the Smithsonian NMNH, Radford University student Sadie Friend noticed strange marks on a chimpanzee skull. She had found a “chomped chimp,” says NMNH anthropologist Andrea Eller. But what was munching on this primate?

“As far as we know, no one had documented these marks on this skull before,” Eller says. The skull had been sitting in collections for years before the remarkable punctures were recognized. While it’s difficult to say what carnivore bit into the skull, a leopard is the top suspect, based on the marks and the region where the specimen was found.

The chimpanzee may have suffered a similar fate to SK-54. The toothmarks don’t seem to indicate feeding, or even trying to crush the skull. The cat, Eller says, was likely dragging the body, using its canine teeth to grip the skull. Such a moment is an echo of prehistory when our own relatives and ancestors were apparently upright sources of sustenance to leopards. Our predecessors couldn’t have known that we’d one day learn to read such marks, reminders of a time when we were prey.

Then as now, leopards dragged their kills into trees — but sometimes used caves as well. (Credit: NWDPH/Shutterstock)

Riley Black is the author of Skeleton Keys and My Beloved Brontosaurus.