How Ice Cores from Antarctica Can Make or Break Mystery Eruptions 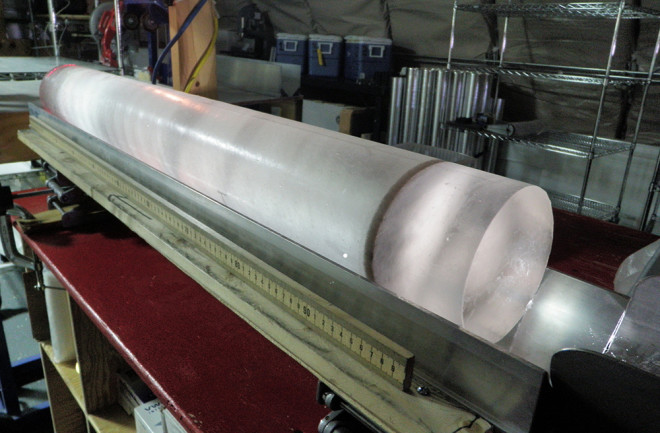 The Earth’s ice caps, in Greenland and Antarctica, are an invaluable record of climate over the past hundreds of thousands of years. As each annual layer of snow falls, gets buried and eventually becomes glacial ice, it traps particles and gases from the time it fell. We use that record to examine how the atmosphere has changed.

These cores turn out to be one of the most important pieces of evidence we have that global carbon dioxide levels in the atmosphere have been rising significantly. However, ice cores can also capture brief moments in time where massive events leave their mark on the planet.

When a very large volcanic eruption occurs, it throws ash and volcanic gasesfar into the atmosphere, sometimes topping 20 kilometers (65,000 feet). This means that the material can be transported widely by stratospheric winds and, depending a bit on the location of the volcano, eventually get incorporated into the snow and ice at the poles.

Usually, the record of these eruptions is a change in sulfur concentrations in the ice. Volcanic eruptions are one of the only events that can inject huge amounts of sulfur into the atmosphere causing the climate to cool. The sulfur eventually rains out, becoming part of the ice core record. There are many large eruptions correlated with spikes in the sulfur record in the ice caps. That is part of the evidence we have to assess just how big volcanic eruptions thousands of years ago might have been.

Yet, even though we think that massive eruptions should leave a clear record on the landscape, the ice core record has a number of “orphan” sulfur spikes. These spikes have not been correlated with any known volcano and include some of the largest spikes in the past few thousand years. One notable missing eruption is a spike in sulfur levels from around 1450 AD. There was clearly a massive geologic event at this time, though no culprits have yet been identified.

So what’s going on? How can we be “missing” giant eruptions in the geologic record?

It really comes down to one thing: location, location, location. Not only do we need to find a volcano somewhere that had a big eruption, but we need to hope that the eruption was in the right place to spread sulfur throughout the stratosphere effectively and that the deposits from the eruption have been preserved and remained exposed (i.e., not buried by subsequent eruptions).

The volcanic eruptions that pack the most climatic punch are located in the tropics. This is because the materials they throw into the atmosphere can get spread globally most effectively. Eruptions at high latitudes might only change things in one hemisphere, but the impacts of volcanoes closer to the equator can be felt around the planet.

Once you have an ice core with sulfur spikes, you need to start trying to match it with potential source volcanoes. One way to do this is just by correlation: I have a spike at ~1452 AD and we know volcanoes X had a significant eruption around then. The dates of many eruptions have some error to them, so we think volcano X had it’s big eruptions in 1430 +/- 40 years, so it could be the culprit.

Now, that might be a good start, but it’s still a correlation. What you ideally want to find is fragments of volcanic ash that record the composition of the magma that erupted. This is a great way to match the spike layer with a specific volcano because the ash composition functions as a volcanic fingerprint.

One volcano that has been eyed as the culprit of the large sulfur spike seen in the ice cores in the 1450s is Kuwae, a remote volcano in Vanuatu. The sulfur spike times with a brief climate cooling around 1453 and it is thought that Kuwae may have had a large eruption somewhere around 1430 (plus or minus a few decades).

Kuwae in Vanuatu, located under the Pacific Ocean between Episode (top) and Tongoa (south). The small island of Laika (middle) is part of a potential caldera for Kuwae. (Credit: Image: ESA/Sentinel-1.)

However, there isn’t a lot of evidence for a truly massive eruption near the volcano. This is complicated by the fact that Kuwae is submerged in the Pacific Ocean between two island (above), so many of the deposits we might seek as evidence are undersea or gone.

A new study in Nature Scientific Reports tries to put this controversy to bed. By looking at rare, tiny fragments of volcanic ash (known as “cryptotephra“) from an Antarctic ice core, Laura Hartman and others show that Kuwae isn’t likely to be the culprit for the 1450s sulfur spike.

They used a scanning electron microscope to analyze the composition of a handful of volcanic ash fragments from the ice core. They found ash far too rich in silica and too poor in iron and calcium to be from Kuwae.

If anything, the ash most closely resembles the composition of ash from the Kaharoa eruption from Tarawera in New Zealand. Is it a smoking gun? Unfortunately, that eruption happened ~150 years before the spike, so no luck there.

Reclus in southern Chile, a potential candidate for the 1450s sulfur spike. Can you spot the volcano buried under ice? (Credit: Image: NASA/ISS)

Another close match is ice-covered Reclus in southern Chile (above). We don’t know a lot about this volcano — heck, it was only recognized as a separate volcanic system about 30 years ago! We know it has produced some large explosive eruptions but its eruptive history before the mid-1800s has not been explored in much detail. However, based on the type of lava it erupts, it could clearly be capable of producing a massive eruption in the past.

So, the mystery of the 1450s sulfur spike remains. Occasionally, these mystery eruptions can be conclusively identified, like Samalas in Indonesia and the ~1257-8 A.D. spike or Ilopango in El Salvador for a spike in ~539-540 A.D.

Now that some potential candidates for the 1450s spike have been identified, researchers can go back and check or expand their eruptive chronologies at Reclus or Tarawera to see if maybe they unleashed the eruption that was captured in the ice core record. Even today, trying to track down the source of giant eruptions can be a real challenge.