How Humans’ Unique Cooking Abilities Might Have Altered Our Fate

While the rest of the animal kingdom subsists on raw food, we Homo sapiens cook our chow. 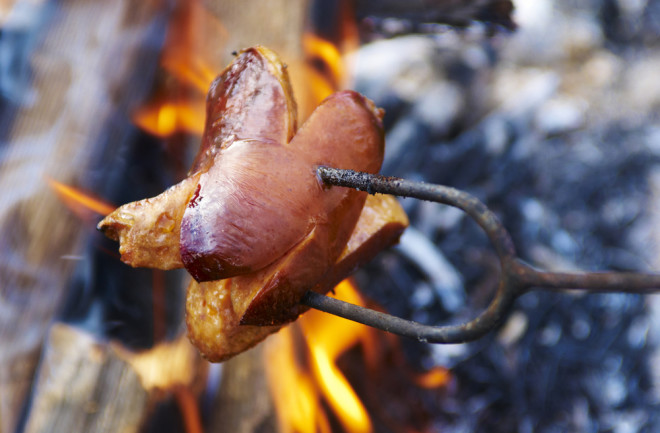 If you cooked dinner today — even a Cup O Noodles — you did something extraordinary and uniquely human. While the rest of the animal kingdom subsists on raw food, we Homo sapiens cook our chow.

And according to some researchers, this distinction made all the difference: When our ancestors mastered cooking roughly 2 million years ago it changed the course of human evolution, they say. Because cooked food provides more energy, the habit led to substantial increases in body and brain size, which set our ancestors apart from other apes. We gained the cognitive prowess to organize society, invent new tools and spread across the planet.

The “cooking hypothesis” was provocative when first proposed two decades ago by biological anthropologist Richard Wrangham and colleagues. But over the years, it’s gained support from an eclectic array of research, including feeding experiments on pythons and studies of the menstrual cycles of raw foodists.

Today, most anthropologists agree that cooking was critical in human evolution. What remains contested is its timing. Some see the practice as a more recent development, perhaps within the past 400,000 years, after which there is clear archaeological evidence for control of fire. Others maintain the original claim: Thermal processing (i.e. cooking) of food dates back ~2 million years ago to the ancestral species Homo erectus.

The cooking hypothesis begins with the observation that food is cooked in every known human society. And it’s not just as a matter of taste — people seem to be physically dependent on heated meals. In natural conditions, we cannot survive and reproduce on raw diets.

What about raw foodists? Those partaking in this fad diet are not in natural conditions; that is, they aren’t limited to seasonal, local wild resources. Raw foodists rely on agricultural products shipped across the world. They also eat energy-rich nut butters, cold pressed oils and other foods, which have been prepared by non-thermal means like crushing and fermenting. These processes achieve some of the same benefits as cooking, without the heat.

Still, upon switching to a raw diet, many people experience dramatic weight loss. While shed pounds may be desirable today, it surely would have weakened our early ancestors.

But more importantly — from an evolutionary perspective — women on raw food diets can lose their periods and fertility. This condition, known as amenorrhea, develops when the body is too energy deprived to sustain a pregnancy. One study surveyed 572 German raw foodists and found approximately half the female participants on entirely raw diets were amenorrheic.

Obviously, not being able to reproduce is very bad for evolutionary success.

The Boons of Cooking

There are several reasons cooked food is so beneficial. First, heat physically and chemically breaks down food molecules, making them easier to digest. That means we waste less energy chewing and metabolizing, and gain more energy overall. Next, cooked foods are safer, as heat neutralizes the plant toxins and pathogens that infest raw meat. Over the long term we can invest less in our immune defenses when eating a cooked diet. And lastly, cooking allows us to consume tough plants that otherwise would be inedible, like certain tubers and roots. Cooking broadens our dietary horizons.

Some of these points have been proven in animal studies. Mice were given cooked or raw beef, sweet potatoes or peanuts; those eating raw food grew smaller than their cooked-diet peers. In another experiment, Burmese pythons fed cooked and/or ground beef expended less energy on digestion than snakes given raw meat slabs.

But, while animals enjoy the benefits of cooked food, only Homo sapiens need it to survive.

There’s reason to think our dependency on cooked food may stretch back around 2 million years. Conspicuous changes in the human fossil record at this time suggest hominin diets improved.

Between 1.8 and 2 million years ago, our ancestors evolved from 3 to 4 foot tall Australopiths (like Lucy) to lanky Homo erectus, who were as tall as living people. Skulls nearly doubled in volume, from chimpanzee-sized to three quarters our present-day noggins. Not only did bodies and brains enlarge, but at the same time the teeth, jaws and chewing muscles got smaller, indicating that we were eating softer foods. Digestive organs of the gastrointestinal tract also seem to have shrunk, based on reconstructions from the size and shape of the ribcage, suggesting our food also got easier to digest.

Somehow, our food got easier to process, and we were getting more energy to fuel our enlarging brains. Cooking could be the answer.

The main critique of this hypothesis is that cooking requires fire, and evidence for fire use is scarce before 300,000 to 400,000 years ago. Yes, there are a few older sites where archaeologists have recovered burned animal bones, heated stone tools and ash, such as the ~1 million year old layers of Wonderwerk Cave in South Africa. But some scientists argue these cases resulted from accidental, natural fires that charred artifacts and bone scraps. They say the intentional production of fire did not occur until obvious hearths consistently appear at archaeological sites, which is after 400,000 years ago.

But defenders of the cooking hypothesis point out that the earliest barbecues were likely small outdoor campfires. Their ashy traces would have blown away in days — and certainly not survived 2 million years.

Other scientists propose that more meat consumption as well as fire-free food processing explains our ancestors’ improved diets. For example, a 2016 Nature paper measured the force required for participants to chew raw sliced goat and pounded tubers (yams, carrots and beets) compared to the unprocessed meat and veggies. Based on those measurements, the researchers estimated that, on a diet of one-third meat, early Homo would have reduced chewing time by 17 percent and force by 26 percent, simply by slicing and pounding the food with stone tools. No fire or cooking required.

20 years since its formulation, the cooking hypothesis continues to be debated and investigated. But regardless of when cooking became a human adaptation, you’re a special animal today because of it.