When bacteria merge - two species are turning into one

Humans have been blamed for the disappearance of species before but never quite like this. Scientists at the University of Oxford have found evidence that two species of bacteria are merging into one. The two species are swapping genetic material at such a high rate that they are on the road to sharing a single, common genome. Their genetic merger is probably the result of being thrust into a new environment - the intestines of heavily farmed chickens, cattle and other domesticated livestock. 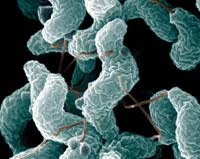 The two bacteria in question - Campylobacter jejuni and Campylobacter coli - are two of the most common causes of gastroenteritis, or food poisoning, in the world. They infect a broad range of animals including mammals, birds and even insects. The two shared a common ancestor and their housekeeping genes - essential genes that are always switched on - are about 87% identical. They are currently recognised as separate species but it looks like some populations are headed back towards a unified direction.

To swap or not to swap

Classifying bacterial species and building family trees for them is never straightforward. Unlike multi-celled creatures, which must content themselves with passing genes on to their offspring, bacteria can happily trade genetic material with their neighbours through a process called conjugation.

Earlier experiments from the lab of Martin Maiden showed that C.jejuni and C.coli are indeed exchanging genetic material. Samuel Sheppard, working in Maiden's lab, carried on the work by comparing the sequences of seven housekeeping genes in almost 3,000 samples from the two species, taken from a wide range of locations. 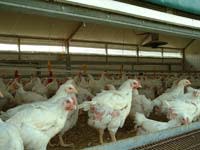 Sheppard found that the two bacteria do still maintain a reasonably distinct identity. Most of the combinations of sequences could be assigned to one or the other, although 11% of those classified as C.coli contained genes that were donated from C.jejuni. Clearly, the genes of the two bacteria are clearly mingling, and more often than not, it was a one-way swap, with C.jejuni donating genes and C.coli receiving them.

The analysis also revealed that C.coli has split into three distinct genetic lineages and the first and largest group was the heaviest importer of C.jejuni genes. Almost 19% of its genes came from C.jejuni and unlike the other two groups, it donated a fair few genes in return.

Sheppard suggests that this swapping is a recent development. The fact that the other two C.coli groups participate in the exchange to a much lesser extent suggests that it started happening after the three lineages split. The imported genes were almost all identical to their counterparts in C.jejuni suggesting that they hadn't had time to change in their new hosts.

The analysis showed that the first lineage of C.coli is converging with C.jejuni at high speed, about four times faster than the rate of change that separated the two species in the first place. Unless some strong evolutionary pressure prevents C.jejuni sequences from taking hold in C.coli, Sheppard thinks that the two species will inevitably converge into a single entity - a case of "despeciation" in progress.

The two species originally split as they came to colonise different and physically separated habitats. For example, C.jejuni is the dominant species in wild birds while C.coli rules the guts of pigs. However, certain hosts provide them with a chance to mingle and these include the chickens and cattle that are so intensely reared by humans. The digestive systems of our livestock brought the physical barriers that separated the two species crashing down, allowing them to trade genes after millions of years of separation.

The genetic sequences of a C.jejuni sample can give away the identity of the host animal it came from. And when Sheppard analysed the genes that had found their way into C.coli, he found that they were indistinguishable from those hailing from farm animals. However, he cautions that the theory still needs to be tested more carefully and we will need an even wider range of samples to do it.

Sheppard suggests that these hybrids may become more and more common as human activity degrades environments that have acted as barriers between closely related species. At the same time, we create new habitats like intensive farms and the drainage areas from mines, that could provide new opportunities for hybrids to exploit.

Images: Chickens by Martin Maiden and Campylobacter by De Wood and Chris Pooley