How Humans Are Helping Ravens and Hurting Hawks 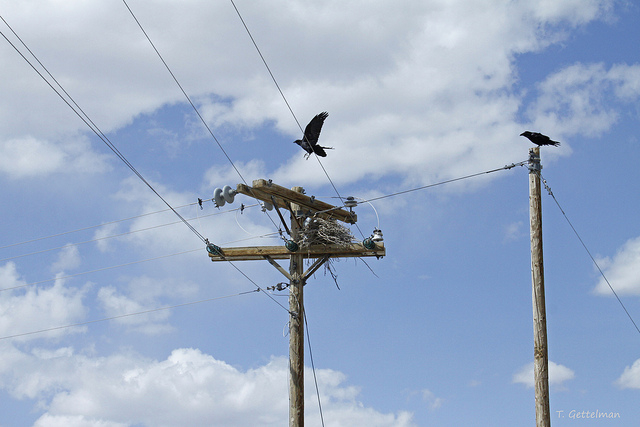 You've already picked a side in the bird wars, whether or not you know it. As humans carve up formerly empty expanses of the western United States with our roads, electrical towers, and power lines, we're inadvertently giving a boost to ravens. Meanwhile, the birds of prey that once ruled the land are being left in the dust. "The ecology of the sagebrush steppe is changing," says Idaho State University biologist David Delehanty. He means a type of dry, scrubby grassland that's found in the western part of the country. Raptors used to be the dominant predators here—specifically the buteos, a genus that includes certain hawks and buzzards (and is pronounced "beauty-ohs," like a very lovely breakfast cereal). These birds have traditionally lorded over the big expanses of arid land. But in recent decades, raptors have become rarer. Taking their place are common ravens. These resourceful birds are generalists, not strict predators like the buteos—they're just as happy gnawing roadkill or garbage as they are swooping down on a live rodent. And now they're the most common predatory birds in the region. To learn what's behind this change in bird demographics, Delehanty and colleagues at the U.S. Geological Survey set out to to see where birds are nesting. Researchers scoured the area surrounding the Idaho National Laboratory—more than 259,800 hectares, or about a thousand square miles, of desert—for nests. From 2007 to 2009, they systematically searched cliffs, rock faces, buttes, caves, live trees, dead trees, and shrubs for raven and buteo nests. They also checked artificial structures: billboards, power lines, cell towers, cooling towers, silos, and so on. Over the three years of the study, the researchers found 212 nests belonging to Swainson's hawks, red-tailed hawks, ferruginous hawks, or ravens. They looked for nesting patterns among each species: Did some birds prefer land near farms? Areas with more grassland? The best predictor of what nests they found was the presence of a human-built structure. It turns out that not only do ravens tolerate our intrusions, but they prefer them. Nearly three-quarters of raven nests were on artificial structures. "Ravens are an intelligent, adaptable, and fascinating bird," Delehanty says, and they're "taking advantage of and benefitting from human landscape alterations." As a result, they've commandeered the West. Raven nests were 4 to 9 times as dense in the study site as any of the hawk species' nests. Among the buteos, red-tailed hawks seem to be the most tolerant of having humans nearby. They like to build their nests with the highest possible vantage point, and sometimes choose electrical towers instead of trees or cliff faces. Ferruginous hawks are the least tolerant of humans, preferring remote, undisturbed stretches of sagebrush (which are becoming harder to find). Buteos like to keep a good distance from each other, but as human activity cuts their land into fragments, this gets more difficult. Ravens, which seem not to mind being closer together, can squeeze in anyplace. If there isn't enough live prey to go around, they'll scavenge or find other sources of food. And ravens have one more advantage over the buteos, Delehanty says: they're "adept nest predators" that will seek out the nests of other birds and eat their eggs. The more ravens there are, the harder it is for other birds of prey to survive. These findings may serve as a warning to hawk conservationists. "At one time, it was argued that power lines and towers would benefit hawks," Delehanty says, by giving them new nesting spots. But it now seems the opposite is true. Our structures are helping ravens, and indirectly hurting hawks by fragmenting the land and allowing ravens to push them out. If humans want to help hawks stick around, we'll first have to acknowledge that we're not on their side.

Image: Ravens in eastern Nevada by Tatiana Gettelman (via Flickr)