Returning or tossing unwanted items can have substantial effects on surrounding ecosystems, but you can always rethink your present strategy. 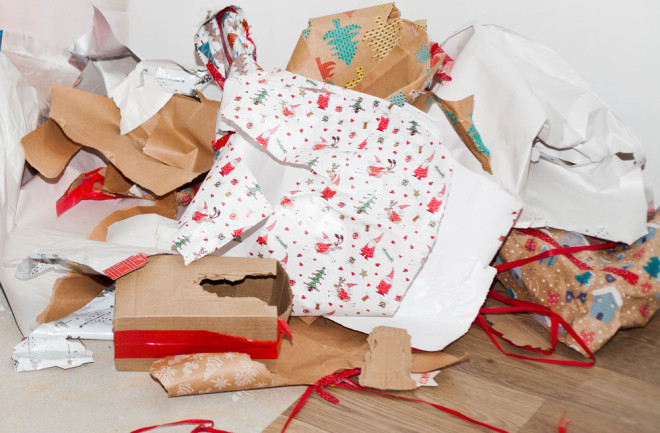 Whether it’s a hideous sweater, a book you’ve already read, or an odd little knickknack, you’ve probably received at least one holiday gift that you just didn’t want. You might try to regift or donate these items, but chances are you’ll end up throwing them away.

Americans spent around $15.2 billion on unwanted holiday gifts in 2019, and 4% of them ended up in the trash, according to a survey by finder.com and Pureprofile. This year, even more presents might end up in a landfill this year, as the National Retail Federation predicts a record-breaking holiday shopping season: Sales could jump 8.5 to 10% higher than last year and potentially rake in $859 billion. Not only is this trend bad for our bank accounts, but the environment is also worse off.

“We definitely see an influx of waste throughout the holidays,” says Jeremy Walters, community relations manager for recycling and waste disposal company Republic Services. Between Thanksgiving and New Year’s, household waste usually increases by about 25% and equates to about 1,000 extra pounds of trash, according to the U.S. Environmental Protection Agency. It’s safe to assume a significant chunk of that rubbish is gift waste.

“In general, people give gifts and they're unwanted, and people don't think about the most sustainable option, which is to donate those items,” he says. “They may not want them but keeping things out of the waste stream is always the most sustainable thing you can do.”

The Environmental Impact of Unwanted Presents

Everything you buy affects surrounding ecosystems: To manufacture products, it takes energy, natural resources including water and chemicals, and raw materials such as trees or fossil fuels, explains Darby Hoover, senior resource specialist at the Natural Resources Defense Council (NRDC).

“If you waste something, you’re wasting all those embedded resources that go with it,” she says. Instead of tossing out unwanted goods, try to regift, repurpose or donate what you can. Try giving away presents using local buy-nothing groups — there, you can post items on social media and someone in your neighborhood can claim them for free.

It’s best to keep things in use in their original form for as long as possible — and out of landfills, Hoover adds.

Once in a landfill, organic materials like paper or food emit the greenhouse gas methane as they decompose. Plastics can take generations to biodegrade and can release dangerous chemicals. Textile waste also emits harmful greenhouse gases and can leach toxins and dyes into the surrounding soil or groundwater.

Can You Recycle Gift Wrap?

There aren’t many components of typical gifts that you can recycle through traditional methods, Walters says. Take the packaging, for example: Cardboard shipping boxes or product packages are recyclable, unlike plastic packaging.

“You buy a kid’s toy and it’s in a cardboard box, but then has some sort of form-fitted plastic shell — that’s not recyclable,” he explains. Instead, plastic bottles, jugs and tubs labeled No. 1 or 2 are the plastics most widely accepted by recycling companies.

Wrapping paper isn’t always recyclable, either, especially if it’s shiny, glittery, laminated or contains a foil print. But printed matte wrapping paper is fair game, Walters adds. Bows, ribbons and gift bags also aren’t viable. When these materials end up in curbside bins, they can get tangled in recycling equipment and pose a risk to workers.

To cut down on waste, you can reuse or repurpose gift wrap. Walters says his family puts someone on “bow duty” to collect and save them during present exchanges: “I'm sure some of the bows that we have on our gifts have been circulated for the last 15 years.” Hoover says using magazines, newspapers, catalogs and old calendars as wrapping paper is a creative, sustainable option.

Returning items may seem like a logical way to deal with unwanted holiday offerings, but this option is associated with significant environmental consequences. This shipping process emits around 16 million metric tons of carbon dioxide a year, and e-commerce returns produce 14% more waste than in-store ones, according to research by reverse-logistics company Optoro and Environmental Capital Group. What’s more, 5.8 billion pounds of returned inventory ends up in a landfill each year.

“You think, ‘I'm returning something to this retailer that I didn't use, so of course, it should just get resold,’” says Meagan Knowlton, Optoro's director of sustainability. “There are a number of reasons why products don't end up getting resold or even donated.”

Processing returns can be time-consuming and labor-intensive, she explains. Employees have to open boxes of returned goods, check the condition of products and decide whether they can be restocked. Many products, especially damaged or seasonal items, end up being sold in bulk to liquidators or thrown away because of the extensive resources required to process them. Plus, certain product types, like home health items, can’t be resold for regulatory reasons.

While it’s difficult for consumers to know for sure what happens to a returned item, Knowlton suggests sending items back as quickly as possible or doing the process in-store, which increases the likelihood that they’ll be resold. By grouping errands to the store and post office, you can cut down on gas emissions. Additionally, consolidated return programs, such as Amazon drop-off locations, allow you to return multiple items at once.

Reducing the likelihood of unwanted, garbage-bound gifts starts with assessing how you exchange them in the first place. You can come to an agreement with family and friends not to gift, for example. Other options include donating to the recipient’s favorite charity, or gifting experiences such as dinners, concerts or online classes.

“There’s value in experiences because it’s a memory that you guys will keep, and you won’t outgrow a memory, but you may outgrow a shirt,” Walters says.

If you do exchange presents, buy what you’re sure the receiver will actually use, and always provide a gift receipt, Knowlton says. When you receive something you don’t love, don’t throw it in the trash — do your best to keep the item in use for as long as possible via regifting or donating.

“That is a really great way for us to try to lessen our impact on the environment, and it all goes toward the goal of leaving this planet better for our future generations, leaving it safe and full of resources for our kids and their kids,” Knowlton says.