How Getting #Engaged Changes Your Tweets 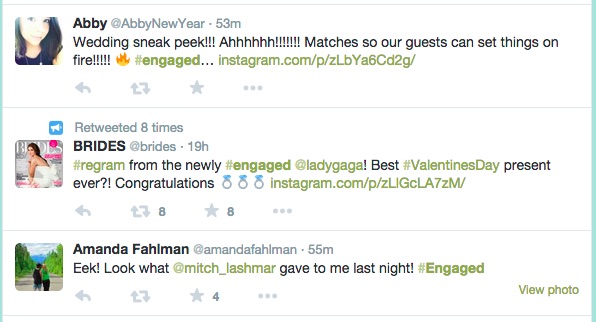 "Opinions are my own," declare countless Twitter profiles. Users want to make it clear that they aren't speaking for an employer. Yet even when we think our words are our own, our circumstances may speak for us more than we realize. Microsoft Research scientists Munmun De Choudhury and Michael Massimi studied how Twitter users' language changes after they get engaged to be married. Actually, the researchers only studied a certain group of engaged people: those who announced their engagement in a public post on Twitter with the hashtag #engaged. Combining data from Twitter with the sharp eyes of Mechanical Turk workers, the researchers found 923 Twitter users who got engaged (and #engaged) between May and December of 2011. Next, they collected these users' tweets from before and after they were engaged. Drawing from the 9 months prior to each engagement and 12 months after, they ended up with more than 2 million tweets. The authors also needed a control group to compare to their engaged tweeters. For this, they sampled tweets from 50 random Twitter users on each day of the study period (spanning both the pre-engagement and post-engagement months of the engaged subjects). This added more than 12 million tweets from more than 11,000 users. There were striking linguistic differences in people's tweets before and after getting engaged. De Choudhury and Massimi summarized these differences in a paper they'll present at a March conference. For starters, pronouns. How often did people's tweets include the first-person singular pronouns "I" or "me" versus the plural "we" or "us"? After getting engaged, subjects tweeted 51% more first-person plural pronouns. Meanwhile, their first-person singular pronouns decreased by a whopping 69%. The researchers think this means people identified more with couple-hood after getting engaged. (During the same time period, the control group ticked up a few percentage points in singular pronouns and down a few in plurals. Changes in the control group's numbers were similarly small for the other results listed below.) The researchers also looked at verb tenses. They found that engaged tweeters talked more about the present and the future, and less about the past. People used 41% fewer past-tense verbs after getting engaged. But present- and future-tense verbs increased by 52% and 62%, respectively. And as long as they were talking about the future, engaged people were likely to mention their wedding plans. When the tweets were sorted into topic categories, "wedding planning" was the most common. People's wedding-planning tweets began to climb three or four months after their engagement, then steadily increased over the rest of the year.

Some #examples. They also tweeted more often about their loved ones. Words relating to friends increased 68% after users got engaged. And words about family members—sisters, in-laws, etc.—rocketed up by 219%. The researchers wanted to know how well their results agreed with Twitter users' own perceptions. So they recruited another group of subjects who had tweeted about their engagements. (For privacy reasons, they couldn't use the subjects from the first part of the experiment.) In surveys, they asked these engaged tweeters why they'd chosen to share the news on Twitter. "Generally," the authors write, "they were excited and wanted to share the news with as many people as possible and as quickly as possible." De Choudhury and Massimi's study didn't include non-English speakers, of course. Or people who don't follow Western engagement and marriage traditions. Or people who prefer Facebook or Instagram. Or even people who tweeted about their engagement without using the #engaged hashtag. But within this limited population, the results seem to show that Twitter users' voices change after they're engaged. They tweet more about their families and their significant others, and less about themselves as individuals. They talk less about the past and more about planning and the future. These changes fit with the idea that engagement is a transitional time marked by rituals, the authors write. But the results could also mean that Twitter users are "carefully crafting their self-presentation" to appear the way they think an engaged person should. Their opinions may be their own, but their #engagements are Twitter's. Images: Top, screenshot from Twitter by me. Bottom from De Choudhury & Massimi.