How Europeans Got to Europe 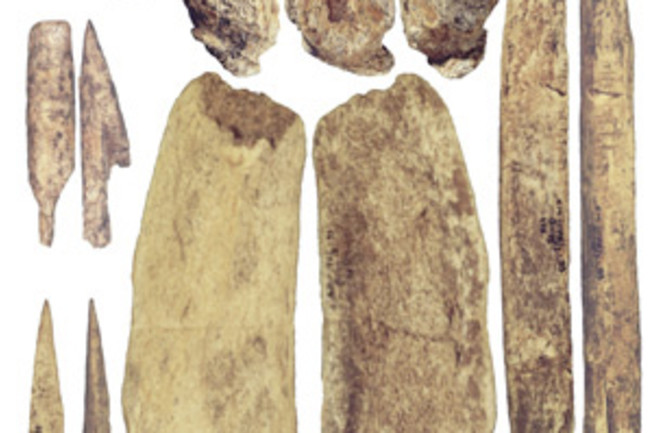 Carved bone and ivory tools, excavated in Russia, made by early humans more than 40,000 years ago. | (Courtesy of A.A. Sinitsyn)

It has been widely assumed that modern humans—Homo sapiens—first traveled out of Africa and settled in central and Western Europe before heading to Eastern Europe. That may not be the case. Recent finds from a site in Russia about 250 miles south of Moscow suggest that the first humans in Europe were Eastern European.The discoveries include bone and carved ivory artifacts. Researchers calculated the date they were made by determining that the ash surrounding the artifacts came from an eruption that occurred 40,000 years ago in southern Italy. “Some of the artifacts found right under the ash were almost certainly made by modern humans,” says John Hoffecker, a University of Colorado archaeologist working at the site. Among them is an ivory piece that appears to be the head of a partially complete human figurine. Radiocarbon and other dating methods also helped establish that the artifacts—stone blade fragments, scrapers, shell ornaments, a bone awl, and various digging and carving tools—are an astonishing 42,000 to 45,000 years old.

The artifacts are most likely remnants from H. sapiens, not Neanderthals. “The shells came from the Mediterranean basin, a minimum of 300 miles away,” Hoffecker says. “One of the things you see when modern humans show up is a big leap in the distances over which materials move.” The carved piece of mammoth ivory is further proof of modern humans at work. “Carving ivory is confined to modern humans,” Hoffecker says. “So whether it’s a human figurine or not doesn’t matter. A modern human carved it, and that human is older by a considerable amount than any previously found in Eastern Europe.”