From bleached coral reefs to migrating wildlife, here's four ways that climate change is already impacting biodiversity across the globe. 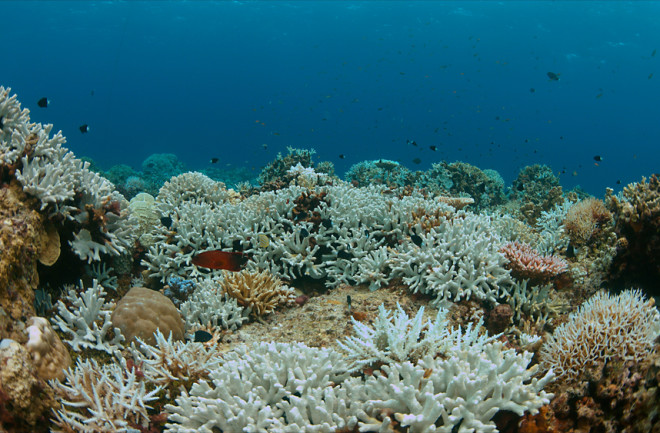 The consequences of climate change are becoming clearer and clearer: Earlier this year, a report by the International Panel on Climate Change warned that now that we've surpassed 1.1 degrees Celsius of warming, impacts are already being felt across the globe, from still-smoldering wildfires to historic droughts.

‘Rainforests of the Sea’ Under Pressure

Rising temperatures and ocean acidification can cause stress to coral reefs, increasing so-called "bleaching events." When exposed, corals expel the life-giving algae that live within them, leaving them a ghostly white.

By 2050, 90 percent of the world’s coral reefs could undergo annual bleaching, according to the conservation NGO Coral Reef Alliance. Such events can cause a knock-on effect for the numerous species that rely upon reefs — up to 25 percent of known marine species — potentially triggering long-lasting losses. One estimate states that around 50 percent of reefs are already degraded due to climate change and other pressures such as overfishing and pollution. The good news is that research suggests reefs can (and will) adapt to moderate warming, if given the chance to do so.

A changing climate also elicits changes in the behavior of wildlife. A meta-analysis of around 100 species — including fish, insects, amphibians, birds and mammals — published in the journal Oikos noted that human-induced environmental change is already doing just that. Climate change prompted the strongest response among species, researchers found, including increases in boldness and exploration.

There were other changes, too. In the Arctic, the researchers found that calves are being born earlier in Spring than usual, “roughly tracking rates of warming,” according to a press release. Birds, too, are nesting earlier than usual. The effects of climate change, combined with other changes such as habitat loss, also mean that some bird species, such as the redstart, are having more offspring than usual, while others, like the garden warbler, are having fewer.

Meanwhile, in the Pacific Ocean, leatherback sea turtles are migrating further to find cool areas to feed after nesting. Researchers in French Guiana, supported by Greenpeace, tracked ten turtles and found that the animals covered as much as twice their usual distance when migrating north. Other marine species are also on the move, including iconic sharks such as the Great White. And these migratory shifts don't happen in isolation, but instead send ripples across entire ecosystems: The unprecedented arrival of young Great White sharks along the central California coast, for example, is placing endangered species (like the California otter) at even greater risk.

The Bramble Cay melomys lived solely on a small island at the northern tip of the Great Barrier Reef. It was wiped out in 2016 by sea-level rise. (Credit: Ian Bell/EHP/State of Queensland/Wikimedia Commons)

Species that live exclusively on islands are particularly at risk of being snuffed out by climate change. Islands hold many of the world’s most spectacular flora and fauna, but researchers warn the same conditions that give rise to these wonders leaves them vulnerable. Many island-dwellers survive by exploiting specific niches and the capacity to live within restricted ranges, which also makes them more exposed to habitat loss, rising sea levels, and increasingly violent — and more frequent — storms.

In 2015, the effects of sea-level rise on the tiny island habitat of the Bramble Cay melomyses, a small rodent, led to its extinction, making it one of the first species-wide casualties of climate change.

Plant Life on the Move

The relationship between plants climate change is a complex one. Increasing Co2 can drive greater growth, but as water availability fluctuates, temperatures change, and extreme weather hits, plants can also be left vulnerable. The result is a shift in global plant life. Some species are moving uphill, or poleward, while those that don’t mind the warmth, are moving downslope.

In the United Kingdom, climate change is driving wildflowers to relocate. In 2020, citizen scientists spotted bushels of plants popping up in new areas, migrations that have been linked to drought-like conditions in the country. Wild orchids, such as the Southern Marsh-orchid, once restricted to southern England, can now be found further north. Meanwhile, bee orchids, whose flowers resemble a bee's backside, were spotted for the first time in Scotland.

Like J.R.R. Tolkien’s mythical Ents, trees are also on the move. Perhaps the most visibly-dramatic effect on forests right now is raging wildfires. In the United States, climate change is “projected to increase the extent, intensity, and frequency of wildfires,” across certain parts of the country, according to the Environmental Protection Agency. These fires, research suggests, are contributing to a shift of some tree species in the Western states towards cooler and wetter areas. Drought, too, is fueling this change in the Earth’s mosaic of forests: Satellite imagery shows that conifer forests are shifting northwards and white spruce, another boreal species, have begun sprouting in the Arctic, far earlier than predicted.