How Do Animals Know What Their Predators Are? 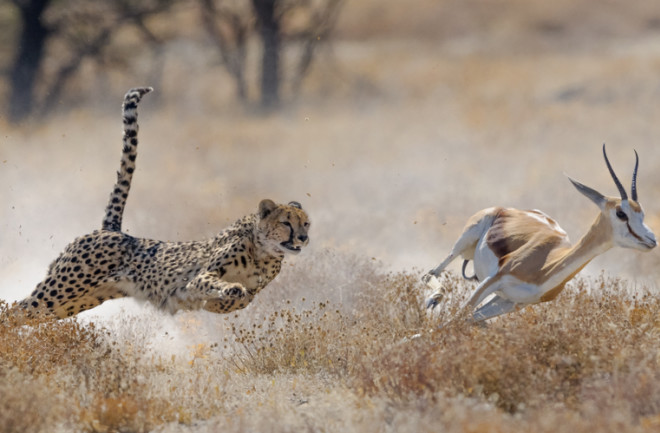 It’s a quintessential nature documentary scene: An unsuspecting animal — say, a zebra, a lizard or a seal — is spotted by a hungry lion, hawk or shark. Suddenly, the predator attacks, and off they go into a high-speed chase. But how does the prey recognize its foe and understand that it poses a risk?

Animals can identify their predators based on a mix of instinct and experience. By studying these interactions between predator and prey, scientists can reveal strategies for conservation and invasive species management.

Many species rely on sensory cues to let them know a predator is around. These signals fall into four broad categories: visual, tactile, auditory and chemical cues, according to an article in Nature Education.

In general, different prey animals might react to the sight of a looming object, a new presence or sudden movement, all of which could signal a threat. Some spiders and caterpillars can sense the vibrations of a nearby predator’s steps. And Antarctic limpets, or Nacella concinna, a species of aquatic snail, can distinguish the touch and chemical signature of a predatory sea star from the less-threatening touch of a different sea star species.

But these cues don’t just come from the predator itself: “Interestingly, sometimes it's got nothing to do with the predator at all,” says Tracy Langkilde, an evolutionary ecologist at Penn State University’s Eberly College of Science and co-author of the article. For example, alarm calls of other prey can trigger protective behavior, such as with birds. Chemical signals released by a recently attacked tadpole can alert others to danger, Langkilde says. And in a 2012 study, juvenile orange clownfish identified non-predators as threats when they were fed a diet of fish, suggesting clownfish use scent-based cues to see what a potential predator has been eating.

These cues can be learned, as well. In captive breeding programs, animals are sometimes intentionally exposed to these cues to try and increase their chance of survival once they’re released into the wild.

For some animals, though, it takes more practice to recognize a predator. If animals don’t share space with a large carnivore, they don’t fear it as much, according to research by Joel Berger, a senior scientist with the Wildlife Conservation Society.

Berger recalls watching a group of elk encounter a wolf for the first time in 1998, about a year after wolves were reintroduced to Grand Teton National Park in Wyoming. “This wolf just walked right up to this, like, 250-pound elk. And that was that,” Berger says. His colleague at the time speculated that the unfortunate animal had thought the wolf was a large coyote, which were common in the area and not a threat to adult elk, he says. “But then, after a time, the behavior of elk totally changed. They were learning what was dangerous and what was not.”

Berger studied how elk, caribou, moose and bison react to sounds of predators in three different site types: areas where carnivores were present, regions where they’d gone locally extinct and places where they had been repatriated.

Overall, he found that prey species at sites without predators didn’t react as much to the sounds: They showed less vigilance, less clustering for safety and a lower likelihood to move to a different place. His findings, published in Conservation Biology in 2007, demonstrated that recognizing a predator isn’t always instinctive.

Experience matters, too. Berger says moose mothers that had lost calves to wolf attacks were more vigilant upon hearing recorded wolf sounds than those that had lost calves to other things, such as car collisions or starvation. In Alaska, female moose that had experienced calf predation responded by moving nearly five miles to give birth the next year. Those examples, Berger says, show that animals have the capacity to learn when a predator is introduced. “It may be a little bit naive to think that these prey species do not have the adaptive capacity to adjust their behavior,” he adds.

While some animals Berger studied learned to identify their predators, those were creatures they’d historically evolved alongside. Can animals still learn to identify and fend off a completely unknown threat, such as an invasive species they’ve never seen before?

Sometimes, that answer is no. On islands, for example, an invasive predator might simply take over too quickly for native populations to keep up. In a 2013 analysis of 41 Pacific islands, researchers found that two-thirds of land bird species, excluding songbirds, went extinct between their first contact with humans and European colonization. Today, introduced species such as mongoose on the Hawaiian islands or the brown tree snake in Guam threaten native wildlife.

But in certain cases, evidence suggests that with time, species can learn to thwart new threats. Eastern fence lizards, for example, typically face visually hunting predators such as birds. But invasive fire ants pose a danger the lizards aren’t equipped to avoid. “Most of the time, they rely on their innate defense response, which is to close their eyes and lie really still and blend into the background,” Langkilde says. “That does not work with ants.” As few as 20 fire ants can kill one of these small lizards in a minute, she says.

Slowly, though, the lizards are learning to react differently. Now, they twitch and scratch the ants off their bodies. For a whole population to adapt this way, it takes a long time —about 40 generations, Langkilde says. That’s because by moving around to fend off ants, the lizards also alert predatory birds to their presence. “It’s this kind of trade-off,” she adds.

Predator-prey relations are complicated, especially when human activity introduces creatures that never should have been in an area. But by studying these interactions, researchers are creating a bit of hope. Learning how animals identify a threat could help scientists deal with non-native predators, Langkilde says: “It can give us some ability to predict the types of invasive species that are most likely to have the biggest impact and figure out where we should focus our efforts and management.”