How Big Is Your Water Footprint?

Calculating how much water is used to make consumer products is a complicated but crucial task. 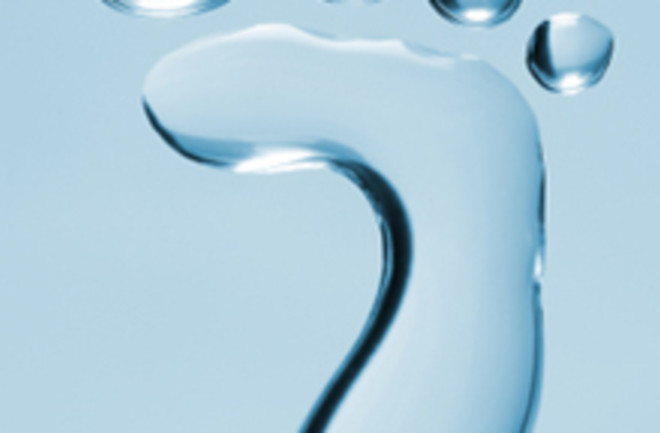 If you think your morning cup of coffee only has 12 ounces of water in it, you're sorely mistaken—it has closer to 40 gallons. Conservation scientists say it's time we think about how much water goes into growing, manufacturing, and shipping our food, and about where exactly that water originated.

Concerns over greenhouse gas emissions have vaulted the term "carbon footprint" into the mainstream vernacular. Now, by promoting the concept of a "water footprint" with the goal of including it on product labels, researchers are hoping to draw similar attention to how drastically we're draining our most precious resource. As the water footprint gains popularity, however, researchers are struggling to reach a consensus on how best to measure that footprint so the public understands its full impact.

As currently defined, a product's water footprint is an inventory of the total amount of water that goes into its manufacture. For that cup of coffee, for instance, most of the 40 gallons go into watering coffee plants and cooling the roasters during processing.

"Most people have no idea how much fresh water they're consuming," says Brad Ridoutt, a water conservation specialist from Australia's Commonwealth Scientific and Industrial Research Organisation. According to Ridoutt, food and energy production account for nearly 90 percent of the world's fresh water consumption.

The water footprint is designed to help consumers and businesses understand just how much water is required to make products like a cotton T-shirt or a can of corn. But according to Ridoutt, just counting up the gallons of water isn't enough, because consumers should also know where that water came from. Corn grown in Minnesota, for example, depends on rainwater, which is abundant and not otherwise useful to people. But in Arizona, corn crops depend on scarce reservoir water. The current definition of the water footprint doesn't address these discrepancies.

In a study published in the February issue of the journal Global Environmental Change, Ridoutt proposed a strategy that takes the original location of the water into account in evaluating the environmental impact of its use in product manufacturing.

To illustrate his ideas, Ridoutt chose two common household food items: an 18-ounce jar of Dolmio pasta sauce and a small bag of Peanut M&M's. For the pasta sauce, the volume of water needed to grow the tomatoes, sugar, garlic and onions added up to 52 gallons. For the M&M's, the total volume of water going into all the ingredients was a whopping 300 gallons.

Comparing these conventional water footprint values would lead people to think the bag of M&M's takes a far worse toll on our water resources. But that isn't the complete picture, says Ridoutt.

Because tomato plants are typically grown in hot, dry climates, they are watered using irrigation systems that draw from the same locations as human drinking water. On the other hand, the cocoa and peanuts in the M&M's are grown in more temperate regions, where they don't need irrigation because they pull water directly from the ground. Taking location into account, Ridoutt says, drastically changes how you think about the water going into your food. According to his calculations, the pasta sauce is about ten times more likely than the M&M's to contribute to water scarcity.

Ridoutt is not the only one trying to redefine the water footprint. Conservationists around the world are trying to figure out how to best include environmental impact in water footprints so they can be incorporated into food labels. The International Organization for Standardization now has a project underway to tackle this problem using methods similar to Ridoutt's.

While many researchers support Ridoutt's work, others say we don't yet know enough about the Earth's water cycles to accurately measure environmental impact. Organizations such as the Water Footprint Network and the World Wildlife Fund still believe that simply reporting the total volume of water is currently the best and clearest way to communicate a water footprint.

"The paper Brad has written has quite a high value, but there is a long way to go," says the World Wildlife Fund's Ashok Chapagain, who has been studying water footprint methods for over five years. Without an agreed-upon standard, reporting water footprints simply as volumes is the easiest for consumers and businesses to understand, he says.

Ridoutt, on the other hand, believes his method will be more useful for consumers, and he hopes that when water footprints are applied to food products in the future, they won't be just a sum of all the water going into them. He says, "If you want to communicate something to the public in a simple way, you have to express it in a way that gives the [environmental] impact."

This article is provided by Scienceline, a project of New York University's Science, Health and Environmental Reporting Program.