How Beer Bears Witness: Your Hair Shows Where You've Been Drinking 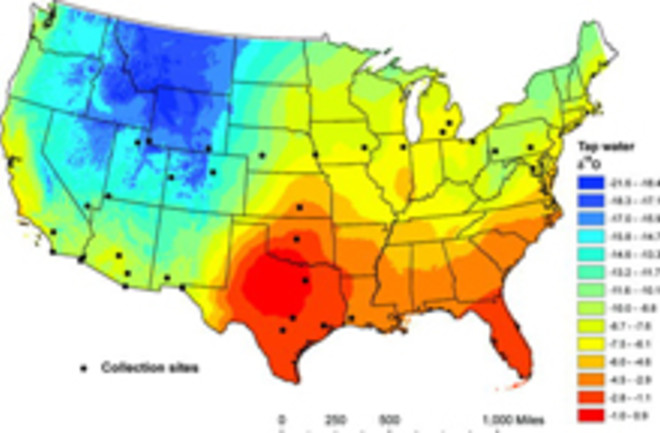 I know, I know—after the flawless execution of the perfect crime, all you want to do is put your feet up at a bar with a patio and savor a cold one. However, a new study out in the Journal of Agricultural and Food Chemistry says that the bottle of Budweiser is just filling your body with incriminating evidence. It's no secret that traces of what you consume can end up in your hair (hence hair-based drug tests). The researchers wanted to know if they could find a signature in those traces that would show not just what you've been using, but also where it came from. So they traveled to a bunch of different U.S. cities and tested out a few of America's favorite beverage products—Budweiser, Coke, and bottled water—to see if their chemical fingerprints matched up with the fingerprint of the local water supply.

Researchers found that water samples from 33 cities across the United States could be reliably traced back to their origin based on their isotope ratios. And because the human body breaks down water's constituent atoms of hydrogen and oxygen to construct the proteins that make hair cells, those cells can preserve the record of a person's travels [ScienceNOW].

Scientifically, this is pretty cool. And Scientific American notes

that a similar method is being used to trace the origins of unidentified murder victims. But to suggest that the finding is going to set up CSI: Coke Bottle anytime soon would be going a bit too far.

This won't help with local criminals too much—it's difficult to distinguish Chicago from Milwaukee, for example—and a stray bottle of true Fiji Water—or a bottle of Bud trucked across the state of Texas, for that matter—could throw the whole trail off. And that's before an accomplished criminal takes the savvy step of shaving his or her head [Scientific American].

The best you could really do with this is pin down a region. Take Bud's main American competitor, MillerCoors: The conglomerate boasts 10 breweries

around the country to manufacture all the High Life and Coors Light its customers crave. But no matter where in the Western U.S. you've been sipping their watery American macrobrew, it probably came from either Irwindale, California, or Golden, Colorado. Processing may also change the ratios present in water. If scientists had been able to do this back before nationwide distribution, when most people drank locally made beer, this method of tracking might have been really successful. It seems, though, that in the age of constant connectedness, there are probably easier ways to figure out where you've been. So enjoy that cold one. If you're evading the law, you probably have more pressing worries than the isotopic ratios in your hair. Related Content: 80beats: CSI Canine: Dog DNA Can Help Cops Nab Dog-Fight Criminals

80beats: Could Forensic Scientists ID You Based on Your "Bacterial Fingerprint?"

80beats: Verdict on Forensic Science: It's Quite Bad