How Ants and Plants Forged A Lasting Partnership 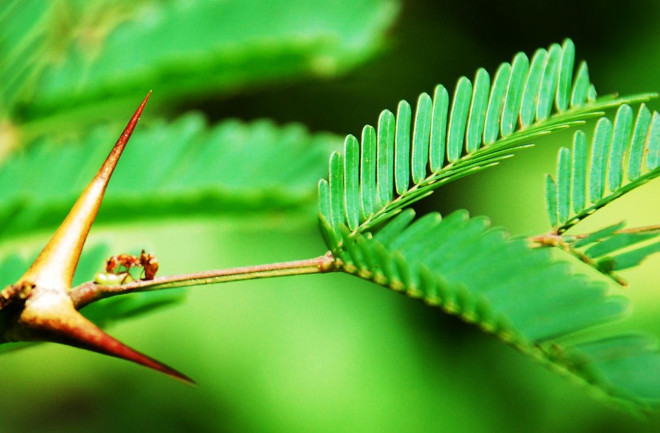 A plant that evolved hollow thorns for ants to shelter in. In exchange, the ants defend the plant from attacks from other insects and mammals. (Credit: Field Museum, Corrie Moreau)

As alliances go, the one that exists between ants and plants is impressively robust. Symbiotic relationships exist between many species of flora and Formicidae fauna, and it’s evolved past simple you scratch my back, I’ll scratch yours deals. Some plants have been living and working with ants for so long, and the partnership has been so beneficial, that they’ve actually grown special structures to variously feed or house species of helpful ants.

Which Came First: Plant or Ant?

To investigate the beginnings of the tightly relationship between plants and ants, researchers from the Field Museum of Natural History conducted a deep genetic analysis of over 10,000 plant genera and 1,700 ant species. Using a technique known as ancestral state reconstruction, they traced these species back through evolutionary time, plunging through phylogenetic layers to arrive at an approximation of what their distant ancestors looked like.

Their work suggests that ants and plants first began hanging out sometime in the Cretaceous period, the time of the dinosaurs more than 66 million years ago. It started slow: The ants simply traipsed among the flowering angiosperms, foraging for food in the greenery. Then, they began supplementing their predatory diet with sap and fluids from cuts or wounds in the plants, and it began a transition to omnivory for the ants. Sometime after that, they began nesting there, making their homes above the ground among the plants.

The ants also began helping the plants out, defending them from predators, and sometimes unintentionally carrying their seeds to new locations to sprout. Though it took awhile, the plants began leaning in to this unexpected support from the ants. They evolved special nectaries just for their companions, and added nutrient-filled elaisomes to their seeds, helping ensure that the ants would take and spread them around. Others created domatia, specialized structures on the plant’s body perfect for ants to live in, ensuring that they remained close by.

Today, hundreds of ant and plant species work together. The plants get defenders and seed-bearers, while the ants get a place to live, or an easy food source. It’s an example of symbiosis that worked so well and for so long it became written into the plants’ genetic code. The phenomenon has become so widespread that researchers have even given these types of plants a name: “Myrmecophytes,” which means literally “ant-plants”.

Oddly, though, the ants don’t seem to benefit from the arrangement, at least on a macro level. The researchers compared the diversification rates (which serves as a measure of how well a group of organisms does in very general terms) of ants that lived with plants to those that didn’t, and found no difference. The ants who had gotten a floral boost didn’t end up better as a species than those that didn’t. On a more zoomed-in level there may be benefits specific to different environments, of course, but in the long run, living with plants didn’t help.

The researchers suggest that this could be due to the fact that the sap the plants feed to ants isn’t actually very nutritious compared to other potential sources of food, or because living up among the trees with plants presents a more challenging environment. Whatever it is, it’s too late for the ants to go back now. They’re bound to their planty friends one way or another.

The study appeared Monday in the Proceedings of the National Academy of Sciences.