How Animals Evolved to Live in Low-Oxygen Locales 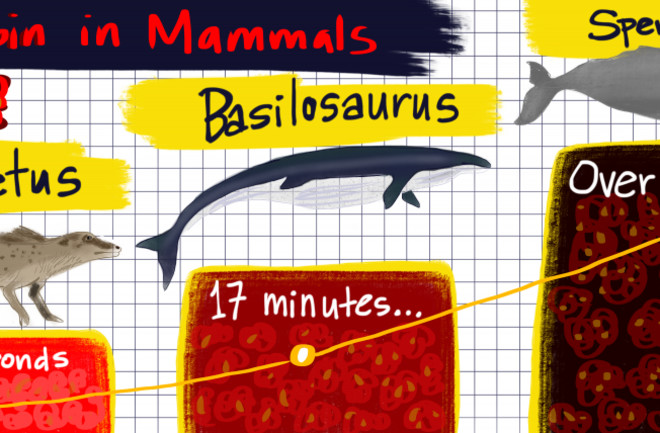 The leisurely pace of a sloth or koala ambling through the forest can certainly seem desirable, but those habitats and lifestyles aren’t for everyone. For the animals tasked with surviving in some of the more extreme environments on earth, such as the oxygen-deprived ocean, or the thin air of the mountaintops, mastery of efficient oxygen uptake is essential.  Several studies that recently appeared in Science shed light on the molecules involved in the abilities of certain animals to push the limits of low-oxygen living.

The fossil record shows that the body shape, limbs, and tails of mammals transitioning from land to water changed drastically to make diving mammals more efficient at hunting, hiding, and surviving in the water. But until last week, scientists didn't know much about the molecular changes that allowed for these diving behaviors. Scott Mirceta, Michael Berenbrink, and their colleagues at the University of Liverpool have not only determined how it is that modern marine mammals can dive for such long periods, but they've also estimated the diving ability of 130 ancestors of today’s elite diving mammals.

The key is the famous oxygen-storing protein myoglobin. Myoglobin makes human muscles look red, and is so bountiful in the muscles of diving mammals that they look black. But at such high concentrations, myoglobin ought to clump together and render itself useless.

Mirceta’s team studied the charges on myoglobin in marine mammals and found that it was so highly positively charged that it was repelled by itself, allowing more of it to be safely packed into smaller volumes. The researchers found a significant correlation between how long an animals dives for and how positively charged its myoglobin is---thus a sperm whale has a much higher positive charge on its myoglobin than a human.

In the case of the sperm whale, that density of myoglobin paired with large body size means the whale can stay submerged for nearly two hours. Extreme human athletes everywhere gnash their teeth.

Once the team realized that diving capacity was correlated with a high positive charge on myoglobin, they began to wonder about the relative charges on myoglobin in ancient diving mammals. As science writer Ed Yong explains, the researchers reconstructed the building blocks of the protein, called amino acids, and determined the different charges on the myoglobin of ancestral diving mammals.

Based on the charges of myoglobin and relative body sizes, they calculated the amount of myoglobin different ancestral animals had, and thus their diving capacity. An early, terrestrial, wolf-sized whale ancestor, the Pakicetus, could hold its breath for scarcely 90 seconds, but fifteen million years later, the six-ton Basilosaurus could stay under for 17 minutes. As mammals have expanded into the aquatic environment, the advantage of bringing a hearty supply of oxygen underwater for a long dive has clearly been favored by natural selection.

A Bladder Full of Air

In another study, researchers uncovered a clue for how it is that fish have managed to occupy such a stressful, advantageous niche for much longer than mammals.

In trout, as in many other fish, the circulating oxygen-carrier hemoglobin can be induced to give up oxygen when blood pH is lowered. Trout use this trick to puff up their swim bladder, which acts like an internal floatie: it helps the fish stay buoyant without having to work really hard to keep itself afloat all the time. But this study revealed another use for the swim bladder: it helps the fish withstand the stress of low oxygen levels in water.

Jodie Rummer, a fish physiologist at James Cook University in Townsville, Australia and lead author on the study, implanted oxygen sensors in the muscles of live fish. When she exposed them to stressful situations, she observed an uptick in the oxygen levels in their muscles by as much as 65%. She determined that a chemical reaction takes place in the fish under stress which forces hemoglobin to dump its oxygen, sending oxygen into the fish's tissues. The ability to quickly force hemoglobin to divest its oxygen in times of stress could thus be a critical evolutionary advantage by fish---useful for moments of hypoxia, evading a predator, or other stressful situations in aquatic living.

Up on the Mountain

We couldn't resist this illustration of deer mice on a hemoglobin molecule by Hideaki Moriyama and Karina Helm of the University of Nebraska.

Far above sea level there is also a dearth of oxygen, and a different hemoglobin adaptation has evolved to deal with it, according to a study led by Jay Storz of the University of Nebraska Lincoln.

Earlier research by Storz and his team showed that North American high-altitude deer mice have evolved hemoglobin that has a high affinity for oxygen, which can improve oxygen uptake in thin air. What was important about this research in particular is that it showed the altered hemoglobin was caused by the combined effects of genetic mutations at 12 different sites in the RNA of the hemoglobin protein.

For this most recent study, also published in Science, Storz and his team tinkered with hemoglobin in a process called protein engineering, producing all the different combinations of the naturally occurring mutations. They found that certain combinations of the mutations improved oxygen-binding affinity of hemoglobin, while other combinations decreased it.

Life with limited oxygen access seems to require a suite of evolutionary adaptations. The key molecular players, hemoglobin and myoglobin, have morphed across species, mutating and shifting to allow animals survive conditions at much higher altitudes, much deeper depths, and much lower oxygen concentrations than our comfortable, oxygenated surroundings.